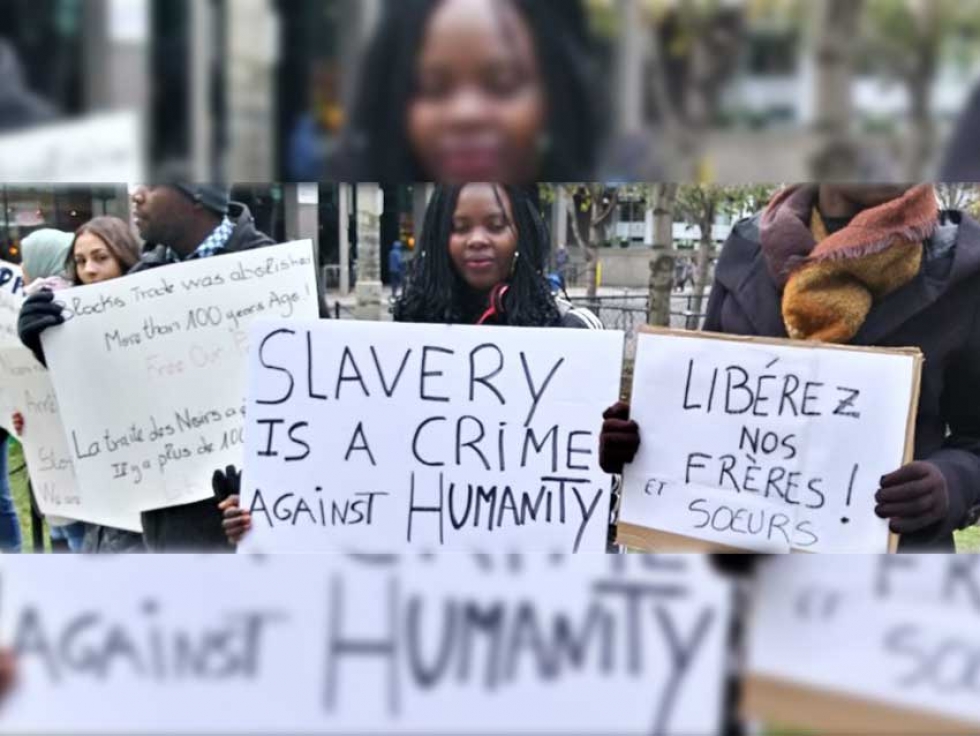 Demonstrators in front of the Libyan Embassy in Ottawa on November 22, 2018 Savannah Awde, Undercurrent Ottawa
28
December
2017

Written by  Beyond Libya Series
Published in Stories

I'm 24 years old, a daughter of immigrant parents, both are from Somalia. I graduated from the Vancouver Film School where I studied screenwriting and film production. I've produced some short films here in Vancouver. I am currently a student of business management at the British Columbia Institute of Technology (BCIT).

How did you first learn about the situation in Libya for African migrants?

A few weeks ago I saw the videos of young Africans being auctioned off.I read more into the thousands of migrants crossing the Mediterranean, too many are being captured, raped, beaten and enslaved and I realized this has been happening for years, but it's not being covered in depth by mainstream media. I came home one night and I questioned my purpose. What kind of human being would I be if I close an eye and not say or do anything. I was heartbroken by this.

How did you come up with the idea of organizing a demonstration?

I decided to create an event on Facebook. For the first few days, I was the only person attending. I kept sharing the event repeatedly, a few friends got on board and soon, the Black Lives Matter Movement in Vancouver helped me reach over 800 people. Alot of individuals were supportive. One quote I found really stood out to me, "If one of us is for sale, than none of us is free" When you come out and stand up for something and use your voice for those who don't have one, that alone is extremely powerful. I have a feeling this is only the beginning.

Who spoke at the demonstration? What was discussed?

Eritrean Canadian Ariam Yetbarek, from Black Lives Matter Vancouver, talked about how tragic the situation is and the importance of recognizing that African Migrants Lives Matters and we cannot tolerate nor standby and continue to let this exploitation happen.

Eritrean Canadian Daniel Tseghay, himself a refugee from Eritrea, gave a very heartfelt speech. He talked about the struggles of refugees, how they can be stuck in a refugee camp for years and if captured, their families are continously bombarded by phone calls demanding thousands of dollars to release their loved ones. Meanwhile their loved ones who are captured are beaten, electrocuted, raped, have melted plastic poured on them, their body parts amputated. He also shared something that a lot of people were not aware of. He explained that if African migrants are on a boat and the boat is being capsized and they know they are about to drown and die, they begin to yell out their names, their tribes, their family names so those who survive can let their families know what happened to them.

Yasin Kiraga, who came to Canada as a refugee from Burundi to study at the University of British Columbia, talked a lot about the Libyan government and the European Union that have allowed this to happen for years. This exploitation works for the European Union because they want to reduce the number of African migrants making it to Europe.

Are you concerned that the situation in Libya is impacting Black people's perception of Muslims?

Yes, I am. Historically, Arabs have treated Black Africans very poorly, including Somali people. I think Muslims of all backgrounds should be fully aware of what's happening in Libya and should be able to clarify that no religion supports these atrocities. This is an opportunity to unite, to shed light on all the evil that is taking place and do what we can to help our brothers and sisters that are trapped in despair.

I think Islam is a beautiful religion but people have the tendency to bring up religion in protests like this and it's such a sensitive and complex topic that I think it should be avoided, because so many people have different views. At the end of the day, we have to acknowledge what we are protesting for, for someone to have the same right as us and for them to not be deprived from the basic necessities of life and not to live in fear and agony.

But many people here are understanding and they want to be educated and they want to make a difference. If more Muslims took the time to speak up, it'll really help people understand that there's more to us than just fear. Islam teaches to be more caring of others, to be respectful of other people's religions and values. This is a moment to demonstrate that, to speak out against the Libyan government and explain that Islam does not allow this.

What would you like to see the Canadian government do to address this issue?

I hope the Canadian goverment brings in as many African refugees as they possibly can and encourage more Canadians to sponsor African refugee families. We're done alot for the Syrian Families and the same must be done for the African Refugees who are often neglected and forgotten. Condemning an act is one thing but doing something is another. This is a humanitarian crisis, affirmative action must be taken immediately.

Sahra Jama is encouraging people to sign the petition, End The Enslavement of African Migrants and Refugees, which will be send to the Council of the European Union, the African Union, and the Libyan Government.

Muslim Link's Beyond Libya Series runs from December 2018 to February 2018. The series will explores the issues raised by the outrage against the abuse and exploitation faced by African migrants, including enslavement, in countries such as Libya and its impact on African Canadians, some of whom have family ties to those who are facing these abuses in North Africa and the Middle East.

Muslim Link is taking the opportunity the several demonstrations against this exploitation organized by Black communities across North America, including in cities across Canada, to open up discussion about the need for more active engagment between Black Muslim, non-Black Muslim, and non-Muslim Black Canadians to address anti-Black racism, Islamophobia, migrant & refugee rights, and imported trauma in our communities.

We are eager to year from individuals and groups in Canada who are actively engaged in trying to build bridges between Black, Black Muslim, and Muslim communties through addressing issues of anti-Black racism and Islamophobia head on.

Feel free to pitch your story to chelby@muslimlink.ca

Latest from Beyond Libya Series

An Immigrant's Tale: A Life on the Line by Habiba Ali
Educational