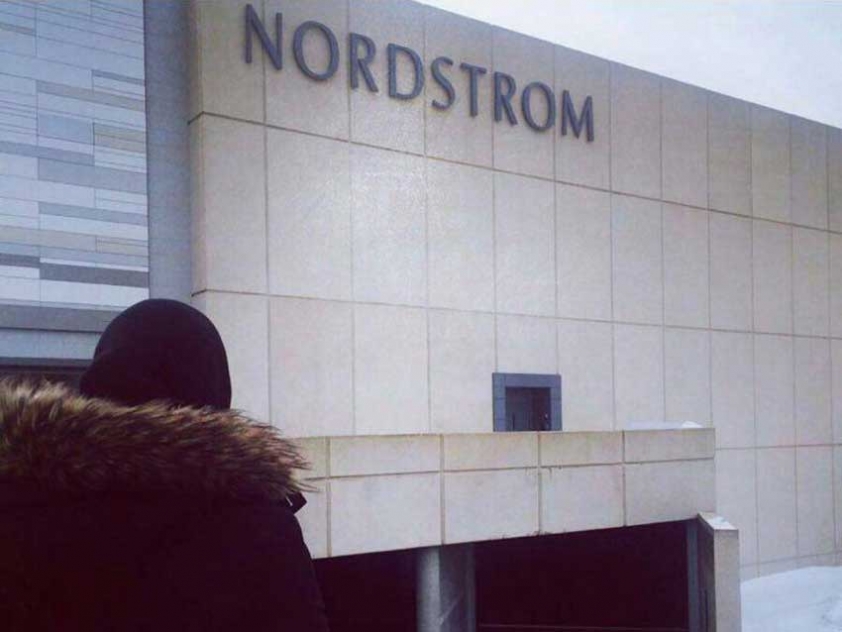 Rowda Ismail reflects on a strange experience at Ottawa's Nordstrom. Was it racism? Islamophobia? Courtesy of Rowda Ismail
21
Feb
2016

University student Rowda Ismail reflects on a strange experience she and her friends had recently in Ottawa's Nordstrom.

On a Friday afternoon, my three friends and I decided to visit the Rideau Centre downtown, which was part and parcel of our post-university midterms celebration. We spent some time checking out the winter liquidation sales throughout the mall, and we visited our essential stores: Aldo, Sirens, you name it.

As we shopped around, Asr prayer (midday Muslim prayer) arrived and we rushed to the fairly new women’s lounge on the 4th floor of Nordstrom. The restroom area is what we would call “Muslim friendly”. It has a women’s lounge, a mother’s room, and multiple stalls that even have toilet seat covers which are really the icing on the cake for me.

After we prayed in the women’s lounge we decided to take a well deserved break and sit down in order to prepare ourselves before we headed out to Winterlude.

After we were seated for approximately five minutes, a woman walked into the lounge and addressed us. She said, “Hi Ladies, I’ve spoken to you all before and I’ve told you that you cannot sit in this area, it is not a place to hang out. This lounge is meant for women with children. If you would like to hang around, you girls could head down to the E-bar just downstairs.”

At first, we were unsure about whether she was addressing us because we had never seen her before. We thought maybe she was talking to the white woman seated across from us reading a newspaper. When it became clear she was speaking to us, we questioned her by saying, “The sign clearly states Women’s Lounge, and there is a mother’s room just across from us. From our understanding, this is a place to lounge for all women.”

We continued to explain the fact that it was our first time there so she had never spoken to us before. She insisted that we were the same people and she would even use the store video to prove it. We gathered our belongings and prepared to leave. The woman seemed to want to escort us out of the lounge. At this point, we felt even more uncomfortable and thought to ourselves “Why do we have to leave the lounge and the white woman with no children who is reading a newspaper doesn’t?”

We rushed downstairs and spoke to the first employee that we saw. We described what had just happened and asked if we could speak with the Nordstrom store manager to gain some clarification of the “Women’s Lounge” sign which we felt needed a new name if the space wasn’t for all women to lounge in.

To our surprise, the store manager was no unfamiliar face. It was the same woman who had asked us to leave the Women’s Lounge. We decided to explain to her that we did not appreciate the manner in which she spoke to us and that she should have a signage change done immediately to prevent any future confusion for other women. Finally, we asked her why the woman reading the newspaper was not asked to leave too.

She replied in an extremely dismissive manner “Well, that lady was not bothering anyone.”

Wait a minute. When she first addressed us in the lounge, the reason she gave us for asking us to leave was because we were hanging out in an area reserved for women with children. Now she was accusing us of bothering people. Who were we bothering and what exactly did we do to bother them?

My experience at the Nordstrom Women’s Lounge leaves me with many unanswered and unsettling questions.

Was the store manager so aggressive with us because she mixed us up with another group of bothersome Black hijab-wearing women? Can she not tell the difference between us?

Were we targeted because we were “Shopping While Black”, an unfortunate reality that even celebrities like Oprah Winfrey have had to face?

Were we targeted because we decided to pray in the Women’s Lounge and this somehow “bothered” the store manager or other shoppers?

Regardless, Nordstrom needs to change its Women’s Lounge sign to indicate that all women are not welcome to lounge there because, given the diversity of the area the store is located in—an ethno-culturally and religiously diverse university and a major transit hub for Ottawa and Gatineau—we were probably not the first and definitely not going to be the last group of young Black hijab-wearing women who might choose to hang out in their “Women’s Lounge”.

Canada is a tolerant country that supports racial and religious diversity and retail stores, especially those located in the country’s capital, should be able to reflect this.

Rowda Ismail is a university student in Ottawa.