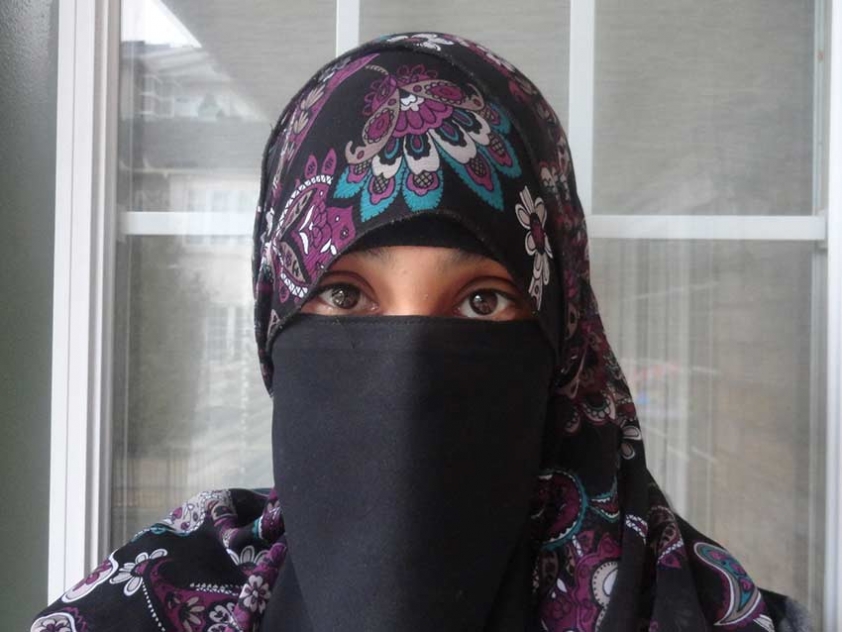 South African Canadian Zahira Jogiat wants Canadians to know that we have more in common as Canadians, no matter what we wear. Courtesy of Zakira Jogiat
26
March
2015

Niqab, Citizenship, and The Politics of Fear

South African Canadian Zakira Jogiat participated in her Canadian Citizenship Ceremony while wearing niqab. She reflects on the opportunities for dialogue the current niqab debates have opened up.

Never before had it occurred to me that I would have to defend my choice to dress as I please so much as in the recent months. For that, I thank our Prime minister, who has made it a true concern to liberate me from a “practice that is rooted in a culture that is anti-women”.  While he has chosen to make me the target of his divisive politics, I am very happy that more Canadians have spoken up, voiced their opinions and we are having a much needed discourse.  In the Midst of the niqab discussion, what has come as a surprise is that a lot public misconceptions have also been dispelled.

This is accurately what we do. When we are unaware of someone’s principles and values, we do not make assumptions. Rather, we have dialogues and interchange views to better understand and provide reasonable accommodation. Just like Ms. Zunera Ishaq and all the other women who have eloquently explained, that this is something they choose, I too have decided to wear the niqab out of pure religious beliefs. I have not made this choice after choosing Canada as my choice of residence, but have rather been wearing a niqab prior to moving to Canada.

You see I have very little interest in politics, but when Mr. Harper has made it an agenda to make me the victim of his bullying and divisive politics, I feel a sudden instinct to defend myself as I can safely assume he has never taken an opportunity to get to know the reasoning behind my choice of dress.

Having arrived here just 10 years ago, I too like many others worry about social, economic and environmental issues. And along with that, just like any mother-I too have my share of maternal worries. I have concerns about whether my children are reaching their milestones, whether they are getting enough nutrition or what super-hero character will they want to dress up as next. In addition I also have other concerns, such as will they have a good education, employment or whether they will grow up to be good contributing members of society in general. But In the wake of Mr. Harper’s comments, I have been troubled because I will have to add to my list of worries, a new set of fears.

A worry, whether it is right to restrict someone’s freedom to choose and that it is in fact very tolerable to slander and speak out against an entire religion.I am more than ever worried about being singled out based on my appearance and faith and worry the same for many other Canadians. I love living in a country where people are free to make their own personal choices but worry when they become matters for politicians to decide on.

In spite of these concerns, the Canada I see is one that is a montage of the many cultures and traditions, one that has its origins based on a value system that is founded on equality, freedom, and respect for all individuals in society, wherein our diversity is our strength and asset. These were the very values I had passionately embraced the day I was welcomed in to the great Canadian family when I had taken the oath of citizenship. For me, my Niqab on that day signified a symbol of my faith and did not stop me from embracing the Canadian flag or from joining in with others to sing the national anthem. For me it was an honor to be a part of this great country which prides itself at home and abroad as a country made up of a cultural mosaic rather than a cultural melting pot. This is the Canada I want my children to be apart off. Not one that has been introduced to a “non-existent” fear of others and prejudice.

My appearance is disturbing to those who have not had chance to know me and every person has a right to their own opinion or judgment. There are a lot of choices we all make that might be hard for others to comprehend. What we do not do is start picking on a few in the guise of liberty. Just like the many who have taken the time to defend my right to choose, whether I agree or not with the many choices they will make, I too would whole heartedly stand up and defend their right to choose. Because that is precisely what being Canadian means to me. Just as I am not allowing my Niqab to be a barrier in expressing myself and extending a hand, don’t let it be a barrier for you to get to know me and my choice of dress. Irrespective of what my appearance means to you, we have a lot in common.  I have nothing to hide and rest assured fellow Canadians, you have nothing to fear.