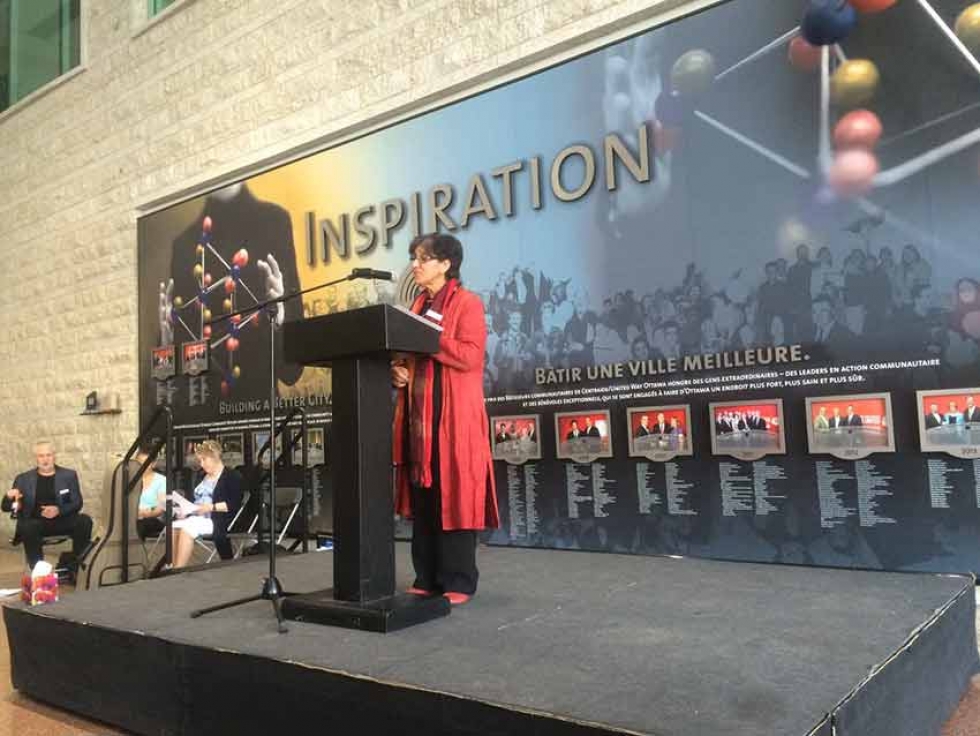 Farhat came to Canada in 1969 to marry and raise a family. Like other immigrants of her age and background she had many aspirations and hopes for her bright children. But in February 2001, her dreams were shattered when her son, gripped by paranoid delusions due to an undiagnosed mental illness, stabbed his friend and mentor of many years who succumbed to his injuries. What began was a nightmare as Farhat struggled with guilt over her son's crime, heartache over the deterioration of her son's mental health, fear for her son's safety in the Ottawa Carleton Regional Detention Centre (RDC), and frustration with a corrections system she discovered to be seriously flawed. But in the process, Farhat became an advocate for the rights' of prisoners and their families and reached out to the support networks that she could find in Ottawa.

Farhat's only son had done very well in school and was fulfilling his and his parents' ambitions for him. But in his late teens, he suddenly began to show signs of detachment and anxiety about school and friends. As is typical of parents, they think their son or daughter is acting up and they tend to rectify the child's behaviour by lecturing them and guiding them as best as they can. He was eventually diagnosed with Obsessive Compulsive Disorder. This was followed by serious clinical depression.

After a long period of helpless ignorance and denial, Farhat started to educate herself about these illnesses. She tried to support her son to finish high school and pursue post-secondary education, and dealt with the occasional crisis when depression would overtake to make him immobile and stagnant. Nothing in what she read or was told by his doctor indicated she should expect violent behaviour on his part. However, after he was arrested, a psychiatric assessment determined that he was suffering from Schizo-Effective Disorder, which can cause serious paranoia and delusions which can turn violent.

While grappling with guilt and remorse over her son's crime ”“ a crime which had caused a mother to lose her son, a wife to lose her husband, and a daughter to lose her father -- Farhat realised she also had to be present to her two daughters who were traumatized by their brother's actions and incarceration. When she visited her son at the RDC, she also discovered that the corrections system, which she had assumed ran with the same degree of efficiency as other public institutions, did not have the capacity to ensure that her son received proper treatment for his illness. She was shocked to realise that she was not alone in the Muslim Community with a family member behind bars. She was given the name of Sulaiman Khan, who helped her with some information about the RDC and gave her son the necessary guidance and help. After 9/11, Farhat's son, an observant Muslim, allegedly became a target of Islamophobic harassment. He was also physically attacked by a fellow inmate. The abuse and lack of proper treatment for his illness led to the further deterioration of her son's mental health. Because he was deemed too ill to stand trial at a hearing, the judge ruled that he should be sent to the Royal Ottawa Hospital for proper treatment where he improved gradually.

Farhat's son's experiences at the RDC opened her eyes to the many challenges faced by the corrections system. During the time Farhat's son was in remand, there were several crises at the RDC due to overcrowding and staff shortages. When the corrections officers eventually went on strike, their local union vice-president Mark Sabada said at the time “it's like a freaking nightmare walking into that place.”

Sometimes after hours of waiting, Farhat would be told that the visit was cancelled. But she says, “Despite how some of them had treated my son, I understood the huge challenges they faced at their work place. It is not just one person's fault. The whole system needs fixing. When I saw them outside picketing, I brought them some Tim Horton's donuts. I said, ”˜I am the mother of an inmate and I support you.'”

It was during this period that a man suffering mental illness died while in custody at the centre, and another mentally ill inmate killed his cellmate. When decrying the inhumane conditions at the centre, Ontario Justice Denis Power said the situation at the RDC brought “the administration of justice into disrepute.”

In 2005, Farhat's son was deemed fit to stand trial by the psychiatrist. He was convicted to a long prison sentence. At sentencing, he expressed extreme remorse for his actions. The judge recommended that he carry out his sentence not within the general prison population but within a special psychiatric treatment facility.  He was sent to the Regional Treatment Centre of Kingston Penitentiary.

Farhat continues to visit her son regularly. Yasin Dwyer, one of the only full-time Muslim chaplain who will not lose his position due to the recent cuts by the Federal government, also visits her son and provides regular reports.

“Dwyer has been a lifeline. Sometimes, when I am not able to visit my son, he can and he lets me know how he is doing. I don't know what I would do without his support.”

Through her journey navigating the corrections system Farhat became involved with organizations like the John Howard Society (JHS), the Community Adult Justice Network (CAJN) and the Smart Justice Network Ottawa.  JHS helps to rehabilitate prisoners back into society. CAJN represents all the social service and religious agencies that help the most vulnerable in our community. Smart Justice Ottawa advocates for prisoners' rights and a more humane, cost-effective corrections system that doesn't make people worse than before they went in.

Farhat and another mother founded a support group in 2010 for mothers in similar situations. Mothers Offering Mutual Support (M.O.M.S.) advocates for the rights of inmates and stresses the importance of family connections throughout the judicial and incarceration cycle.

Farhat is grateful for the support she has found within M.O.M.S. and the prisoners' advocacy community. There is an increasing tendency towards the punitive approach of incarceration and she hopes that members of the Muslim community will become more informed about the serious problems being faced by an increasing number of people caught in the corrections system. Farhat urges more men and women to become engaged in trying to find alternative solutions to incarceration, just as the Aboriginal communities have successfully done.

“We should be interested as we are Canadian citizens and our tax dollars pay for such services. Is the justice system really working to rehabilitate people to get back to society as productive citizens, or are people just getting worse behind bars?  Let us join the debate  on whether mentally ill youth and adults should be incarcerated or held in treatment facilities with more programming, so that when they leave prison”.they will still have hope to lead productive lives with their families,” she says.

Muslims in Prision Series: Starting this month, and in the course of the next few issues, the Muslim Link will be taking an in-depth look at the Canadian correctional system as it affects the Muslim community. The second part in this series will explore the issue of Muslim Youth and Ottawa gangs.