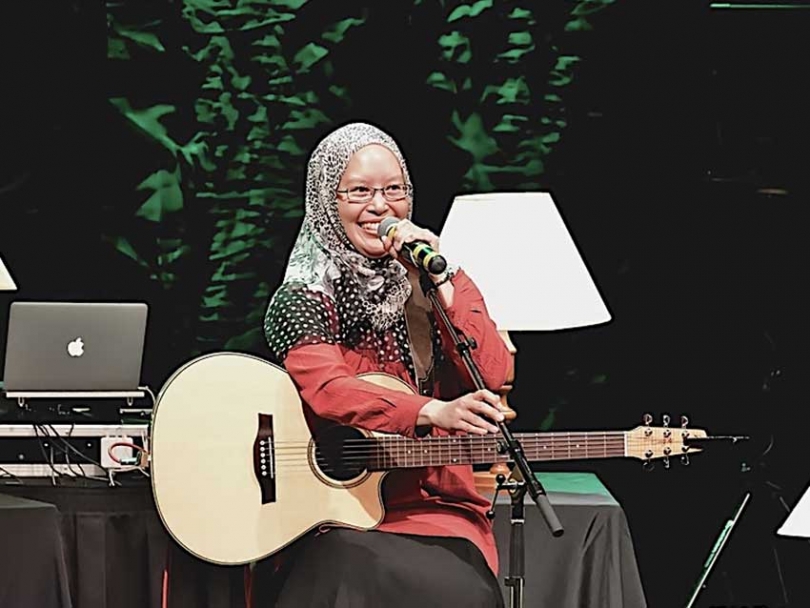 Born and raised in Ottawa, Audrey has only visited Indonesia three times, but it was there that she discovered her interest in playing guitar.

“I visited Indonesia when I was 11 and saw all my cousins having a guitar,” Audrey recalls. “I wanted one too, so my mom saved up and brought one home. I wound up buying a chord book and taught myself. I guess I was determined to learn.”

But Audrey’s journey to music did not really begin in Indonesia; it began in her hometown before she was barely old enough to speak.

“I always sang, before I could talk even,” she says. “So I did choir in elementary school.”

Being born and raised in this country, Audrey has always identified as Canadian, first and foremost.

“To be honest, I grew up thinking that I was more Canadian than Indonesian. I was born and raised here. I knew French and English much better than I knew the Indonesian language. I didn't fully recognize my Indonesian heritage until I was an adult.”

Like many children from a minority background, Audrey sometimes wondered where she fit in within her environment.

“As a child I was always seen as the other, not ever really fitting in whether in my Canadian school community or in my Muslim community,” Audrey recalls.

“Because in both communities, I was a visible minority. It was rather ironic, because Indonesia has the largest population of Muslims in the world, but here in Ottawa, Indonesian Muslims are the minority in our Muslim community. I think it was hard trying to belong, but in the end it made me stronger because I got to make my identity rather than follow the majority that I would never really be a part of completely. I chose to be Muslim, I looked Indonesian, but my heart knows if I belong to any nation it would be Canada with a deep sense of respect for my Indonesian heritage.”

Audrey continued to explore and strengthen her voice during her formative years, later also studying vocal music in high school. Her personal interest in music included musical theatre “sappy love songs, and maybe the kind of music that wasn't always in the way of my religion.” she adds.

While Audrey kept her taste in music clean and compatible with her values, there came a point where she felt she needed to make a decision.

“I went to Ottawa University, and I had to choose between science or music,” she recalls.

“I put [music]  behind me after second year University mainly to focus on my studies but also because I thought it was haram (Forbidden in Islam),” she explains.  “There was this opinion that was made aware to me, that one could not do music as a career, let alone a Muslim woman.”

And so, for a time, Audrey’s music career ended before it even began. Instead, Audrey decided to utilize her vocal gifts in a more specifically religious endeavour; Qur’anic recitation.

“I focused on using my voice to learn how to recite Qur’an. I thought if I sacrificed something I loved doing for the sake of Allah, I was being a better Muslim,” she explains.

“But that way of interpretation led almost to a repression of something that I now know is a gift and was given to me as a trust, not as a punishment.”

When asked what changed her mind about the permissibility of music in Islam, Audrey says; “Age, more knowledge and having a supportive group of Muslim women.”

Audrey also says that Indonesian culture gave her a sense of pride in her gender, as she acknowledges that the question of a woman’s voice is not so much a concern within the Indonesian community.

“From what I understand, Indonesian Muslim women who have the skill and talent recited the Qur'an to the public. They would make recordings of their recitation much like talented Muslim male reciters did. I don't see that in our Canadian Muslim communities, so here there is always a question of Muslim women's voices and visible presence being a violation of exposing their "awrah" (nakedness). I never felt that when I visited Indonesia when it came to practicing Muslims and how they interacted with each other.”

Eventually, Audrey turned back to music and was glad for it.“When I started singing and writing again, it was therapeutic. One of my good friends said, you seem happier now.”

Audrey is one of the founding members of the “Expressions of Muslim Women”; a group of Muslim women who have been getting together every year since 2008 to share and showcase their artistic talents.

“It has been a rewarding experience to be part of this event as an organizer and as a performer,” she says. It has been really neat to see performers develop their talent from starting out on stage to returning in following years and becoming a veteran performer. And it has been fun to see audience members come back the following year, as contributors in the performance.”

At the Expressions art show, Audrey helped facilitate the performance of an Indonesian dance group and later on helped showcase a female Indonesian martial artist.

"We wanted to have cultural dances that were rooted in the region's traditions," explains Audreyt. "So Silat which is the type of martial arts learned by the Malay and Indonesian people was a great way to show and share with our audience something they may have never seen before."

Recently this year, Audrey has been part of another project revolving around Muslim talent. “Songs of Muslim Women” is a one time show hosted at the Centrepointe Studio Theatre where 6 different musical acts took place.

Audrey expands upon the different artists who were featured, “There is a trio called Sisters in Song that combines hymn melodies with Rumi poetry. There are Baraa Arar and Maha Temkit where Baraa performed a spoken word piece accompanied by Maha's guitar. There were original songs by singer/songwriters, such as myself and Stephanie Roy. Ghadeer Abou Shakra played the oud. And lastly Nasreen Shoshi sang songs accompanied by a 4-person band. The music was of different styles, and varies in languages including Arabic, French, Hindi, Urdu, Bengali, Punjabi and English.”

Audrey explains that the show was made possible thanks to a grant offered by the Juno Host committee and the Ottawa Music Industry Coalition.

“Due to the nature of the grant, we tried to make it inclusive to the general public rather than just a women-only audience,” says Audrey.  “So we invited our past musical artists who would be comfortable to share and perform their music in front of the general public.”

When it comes to Audrey’s own music, it can be hard to classify.

“My music is a bit contemporary folk, with a little bit of R&B vocally,” she says. “But then I've been told my song "Beauty Inside" sounds country.”

While her style might be a little ambiguous, her lyrics are not. Audrey’s songs are uplifting; filled with positive and spiritual themes, also sometimes touching upon social issues.

“I tend to write about things and people that are important to me,” she says. “Like I wrote many songs to try and support single Muslim women who felt like they were missing something—I just didn't believe in that way of thinking, so I wrote from my own feelings and story to be positive.”

Audrey says she tends to get inspired through strong people in her life, but also draws inspiration from her Islamic faith.

“I'll think of an ayah from the Qur’an and how it applies to real life and incorporate that into my song,” she explains. “I write often about being positive with life, being hopeful. I have also been inspired about being connected and conscious of God.

I have also written about my grandma; about surviving as an immigrant woman.”

Audrey’s music has reached the ears of many. In 2007, she won box-seat tickets to a Senator’s hockey game by winning a song contest on the CBC.

In 2014, her song “She Misunderstood” won in the multi-cultural category for the Songs from the Heart song writing competition by Folk Music Ontario. And more recently, Audrey is now featured on the Juno Award’s website in a list of artists who will be performing at JunoFest.

As her music career gains more traction and attention, Audrey has a few pieces of advice for any youth seeking out a similar musical path.

“Keep trying and learning from music teachers whether it's to improve your voice or instrument playing,” she recommends.  “The initial learning curve is steep, but eventually it tapers off until you pass a threshold and can play or sing well enough. At the end of day if it is something that brings you joy, and that you can share with others, then it can be worth pursuing.”

And pursuing is exactly what Audrey intends to do. She hopes for a successful and fulfilling future in the music industry, more specially the Canadian Muslim scene.

“[I hope] that I can keep writing honest and sincere songs that mean something and can connect to other people whom I know or don't know. It would be nice to have my songs be part of the musical fabric in Canada, but also of the Muslim music scene.”