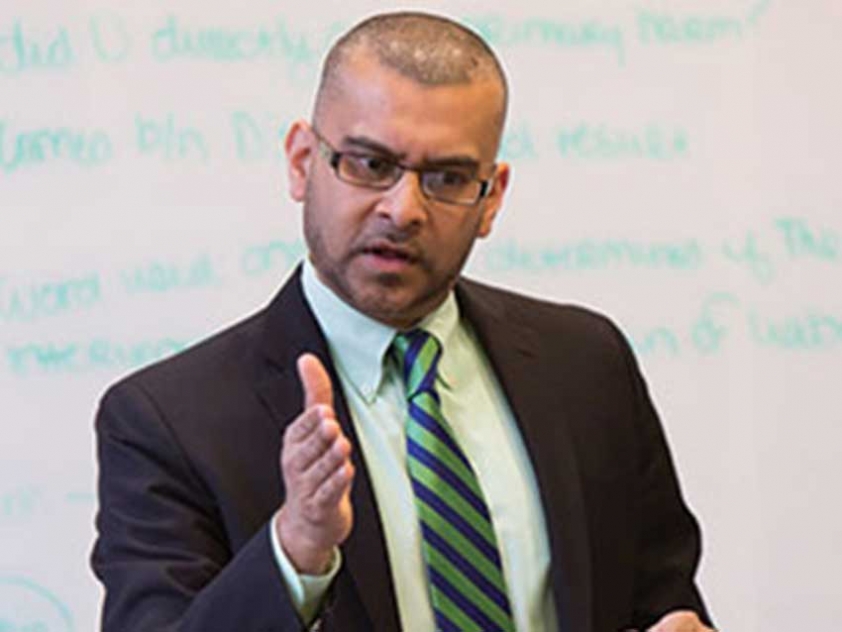 Faisal Kutty is a lawyer based in Toronto. Courtesy of Faisal Kutty
28
May
2015

"Have your children tested for STDs," said a Muslim family doctor during a health session at a Toronto mosque a few years ago. Her message was that unbeknownst to the audience, many of their children were sexually active from an early age.

Some parents just don't want to hear any such talk at all.

A broad-based coalition has raised many legitimate concerns about the new sex ed curriculum but it has also recycled much misinformation and engendered fear. The Ontario government also dropped the ball. It lost the trust of many by being less than forthcoming about its consultation process and by undermining the role of parents.

All stakeholders must feel that at least some of their concerns are heard and validated. Indeed, this is all the more critical when "competing rights" claims are at issue.

The two key areas of tension around the new curriculum revolve around the age appropriateness of specific information and exposure to the LGBTQ community.

With regard to the former, legislation grants parents the right to have their children exempted from sessions when they think it inappropriate. However, the government failed in properly articulating this and showing respect for parental autonomy. It must reiterate this right and explain how it will facilitate this right (except of course in the context of discrimination).

The curriculum is aimed at preparing kids to navigate the complicated interpersonal and sexual situations in today's hyper-sexualized world. Opponents have latched on to a number of provisions.

If children are withdrawn, parents must ask themselves if they will have these conversations. What happens when the other children get to the withdrawn child? While these are pertinent concerns, schools must tread carefully. By imposing one "standard" on diverse groups of people, we arrogantly conclude that there is only one way to approach such complex issues.

Parents may wish to exercise their right to withdraw their kids but the government is less than clear about alternatives and about any notice policies. The public school system must provide a way to address such issues while respecting parental rights to bring up their children in ways they deem appropriate, provided that there is no direct harm or illegality.

The most contentious aspect of the curriculum (though often times unsaid) revolves around the teaching of alternative family arrangements. This shouldn't be the case for several reasons.

First, refraining from educating about the LGBTQ community fails children who come from such backgrounds. Excluding this stigmatized community from the curriculum will only perpetuate their marginalization.

Second, this aspect is vital for children who have no exposure to LGBTQ persons. Education is the strongest bulwark against intolerance and helps to build social cohesion. This must be viewed in the context of respecting the diverse makeup of our province.

Third, it is unprincipled to oppose the new curriculum on homophobic grounds. How ironic that minorities who face discrimination, and battle against it, may be acting as agents of discrimination against another group. One cannot fight xenophobia, Islamophobia, etc., and act based on homophobia.

Since some Muslims appear to be in the forefront of this issue, it is worth revisiting an old Islamic ruling. Consider a ruling by Shaikh Ibn al Qayim al Jawziya, a prominent Hanbali jurist of the 14th century (considered orthodox), who was asked whether the Muslim state should ban the Zoroastrian institution of self-marriage whereby men were encouraged to marry their mothers and sisters. While affirming that this was unlawful under Islamic law, Ibn al Qayim ruled that the state could not ban this practice and that in fact the institution ought to be recognized under two conditions: 1) the matter is not brought to a Muslim court; and 2) the Zoroastrian community recognized self-marriage as a valid tradition.

This reasoning is applicable to this current debate. While in the spirit of religious freedom one may raise objections to beliefs and practices from a religious perspective, a secular state cannot be asked to discriminate.

There are many who vehemently disagree with the LGBTQ culture. At some level this is no different from those who oppose single parent families, children born out of wedlock, boyfriend/girlfriend relationships and even Muslims, Sikhs, Blacks and others. Yet despite fundamental disagreement with certain aspects, most people will not object to these groups being fully accepted. Indeed, all of these are openly discussed with parents, of course, having the right to weigh in at home.

It should be clearly understood that the new curriculum is not a "How to Manual" and that the state is not promoting a particular relationship structure. Ultimately, the government must do a better job of convincing some parents that it is responding to the changing realities. Indeed, children today are exposed to much more than in the past. Between the music videos, internet and television, they are exposed to things many parents could never have imagined before. Indeed, what would have been classified as soft porn only a few years ago is now prime time TV fare. Even worse is available online. In fact, a 2011 comprehensive study by Wellesley College found that programs like Ontario's are merely addressing questions already being asked by kids in our digital world where information is only a click away.

As the doctor tried to point out, denial does not alter the reality. That said, parental rights to be involved and have their input as to when and how their children learn about the most fundamental of life issues must be respected. Yet, there should be no room for compromise in terms of helping children understand the diversity that is out there.