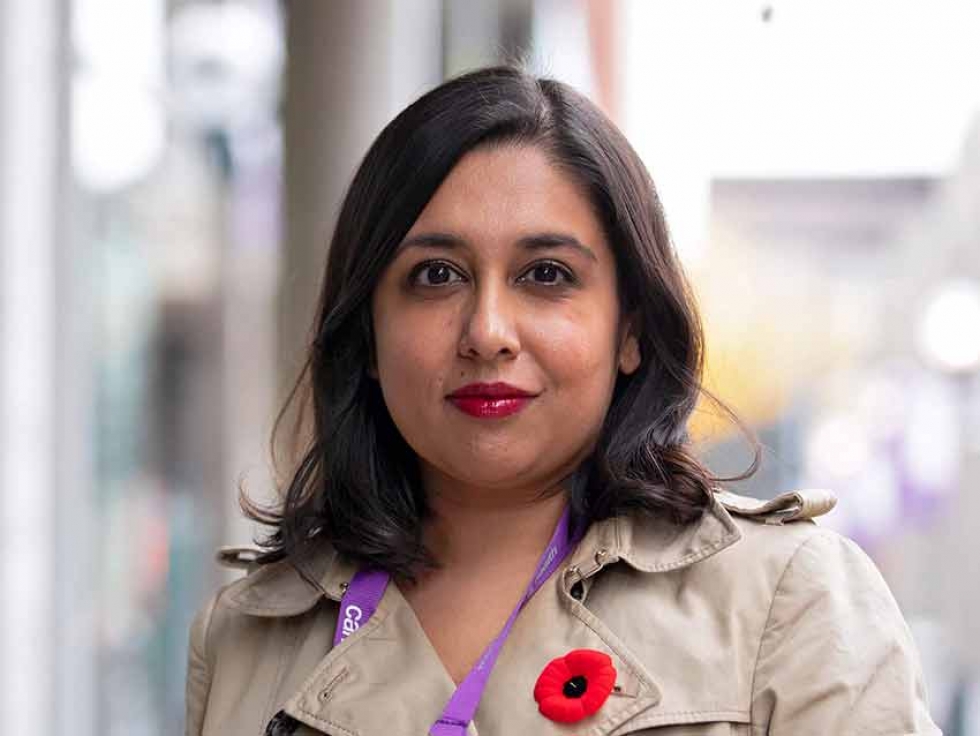 Dr. Juveria Zaheer is the co-author of the Clinician Handbook on Suicide Prevention for the Canadian Armed Forces (CAF) Centre for Addiction and Mental Health (CAMH)
15
May
2019

Dr. Juveria Zaheer is a Clinician Scientist with the Institute for Mental Health Policy Research, and Education Administrator in the Gerald Sheff and Shanitha Kachan Emergency Department at Centre for Addiction and Mental Health (CAMH).

She is also an Assistant Professor in the Department of Psychiatry at the University of Toronto. Dr. Zaheer's research focuses on suicide, gender and culture.

She is the co-author of the Canadian Armed Forces (CAF) Clinician Handbook on Suicide Prevention and she supervised research into what we could learn from the suicide notes available from the Office of the Chief Coroner of Ontario.

She was even recently interviewed in mainstream Canadian media about challenges facing Muslims with mental illness during Ramadan.

Muslim Link interviewed Dr. Zaheer about her work into the reality of suicide in Ontario and within Muslim communities in Canada.

I was born in St. John's Newfoundland. My parents were both immigrants from Northern India. When my grandparents came to St. John's in the mid-1970s, there were very few Muslim families; they would hold Friday prayer and Eid prayer in peoples' homes. Over the years, the community grew, and they worked together to raise money to build the first Mosque in Newfoundland on Logy Bay Road in 1990. The mosque was unique because it was the only one in the town, so Muslims from all backgrounds and sects would worship together.

I am currently a Clinician-Scientist at the Centre for Addiction and Mental Health - clinically, I work in the Gerald Sheff and Shanitha Kachan Emergency Department. My research focuses on suicide prevention that integrates population-level investigation with qualitative research to provide the critical context necessary for developing and evaluating appropriate and effective screening, service provision and suicide prevention strategies, across gender, age, diagnosis, immigration status and ethnicity.

Muslim families often encourage their children to be doctors, and the field of psychiatry is a medical field, but often not one Muslims pursue. What qualities, beyond academics, would you recommend students hone if they are interested in pursuing psychiatry as a profession?

This is a great question. One thing I have noticed is that even though in Muslim families, becoming a physician is encouraged, there can be a little bit of uncertainty about choosing psychiatry as a specialty!

I would say that it's so important in a diverse society that people have access to clinicians who understand their cultural background and experiences, and my Muslim identity I think makes me a better psychiatrist.

I think it's important to gain exposure, by finding mentors, volunteering or working clinically, in advocacy, or in research, to figure out what you like about this specialty. It can definitely be tough to volunteer though for people who are not of higher socioeconomic status, but we need to understand the importance of diversity and the value of work experience that isn't typically associated with medicine.

I would say the most important preparation for me prior to medical school and residency training was working for several years in retail, as both a sales associate and in a managerial role at several malls, including Eaton Centre - I learned how to work with all kinds of people, manage stress, multitask, and gained a lot of confidence.

How did you develop a specialization in the study of suicide in Ontario?

Suicide is a tragedy affecting not only those who die, but their families, friends and communities. Having suicidal thoughts or living through suicidal behaviour is traumatic and a manifestation of serious pain and suffering. Understanding the subjective experiences of those with suicidal behaviour provides critical context necessary for developing appropriate and effective screening, service provision and suicide prevention. Patients, families, community members and health care providers provide critical insights and their voices must be heard to improve the identification and supports available for people experiencing suicidal ideation or suicidal behaviour. I have conducted research that focuses on the complex experience of ethnic minorities at risk for suicide and suicidal behaviour, research focusing on experiences of clients, families, and care providers within the mental health care system related to suicide, population-level investigation on patterns of health service utilization, and clinically-focused research.

Tell us about the research you did related to suicide notes in Ontario?

In this study, I supervised Dr. Zainab Furqan and we worked with co-investigators Dr. Paul Kurdyak at CAMH and Drs. Mark Sinyor and Ayal Schaffer at Sunnybrook. In this study, we examined 1,565 cases of suicide, identified through the Office of the Chief Coroner of Ontario, which occurred between 2003 and 2009. In approximately one-third of those cases, a suicide note was referenced, and in 290 cases a copy or transcription was included in the file. Within that group, we focused on a subset of 36 suicide notes that explicitly referenced mental illness and/or mental health care. We felt that by investigating suicide notes, we have an opportunity to improve our understanding of the mind-set of people who are suffering, and we can use this information to help people who are experiencing suicidal thoughts.

What were some key finding of your research into suicide notes?

Within the notes, the authors found three primary themes that could improve the identification and treatment of those with mental illness who are at risk for suicide:

Suicide can often be a taboo subject within Muslim communities in Canada because of how suicide is perceived. Based on your own research, what myths exist about suicide within both Muslim and mainstream Canadian society?

This is a really important question. Because of the religious prohibition against suicide in our communities, and because of reported low rates of suicide and suicidal behaviour, people may think that Muslims are not at risk for suicide or do not suffer from suicidal ideation (suicidal thoughts).

Sometimes, it can feel that even expressing suicidal thoughts can be haram (religiously forbidden), which can make people less likely to seek help from their families or community, or health care providers. Having these thoughts then can further alienate young people from their supports, and make them feel like they are a burden or unworthy. Having mental health concerns in general can be stigmatized in our communities, or can be dismissed, misunderstood, or taken personally by community members.

Recent research has shown higher than expected rates of suicidal ideation and behaviour for young Muslims living in Muslim Majority Countries (MMCs), but we have no information on the rates of suicidal ideation, behaviour or suicide death for Muslims in Canada. Young Muslims may be particularly vulnerable, due to low rates of accessing mental health care, demonstrated high rates of self-harm in immigrants from several MMCs, negotiating identity, familial, social and gender role expectations across cultures, and experiences of discrimination and Islamophobia. Health care providers may assume that young Muslims are not at risk for suicide, or may not have a deep understanding of the unique issues and diversity within the Muslim diaspora. It can be tough to feel like your clinician can't understand where you're coming from, or that they can make assumptions about your faith.

What is it critical to address these myths in order to save people's lives?

Unless we can address these myths, we will continue to have Muslims in our communities who are suffering in silence. We need to demonstrate the problem, learn from people with lived experience, and engage stakeholders to identify people at risk, support them within our communities, support their access to high quality mental health care, and high quality social services (financial, social). We need to address larger issues, including discrimination, trauma, and islamophobia, to create a society where Muslims feel included and engaged.

Muslim communities can play a role in ensuring that there are more supports for people with mental illness. What are some forms of advocacy you would like to see Muslims play provincially and nationally?

I am new to this area of research and advocacy, and have been so impressed with what I've seen. In the Greater Toronto Area, Naseeha Mental Health and the Khalil Centre Canada, Salaam Support group for LGBTQ Muslims, and the Islamic chaplaincies at the University of Toronto campuses are great resources.

Advocacy starts at home - we need to listen and look out for our friends and family members, validate and support without dismissing or stigmatizing, we can model openness about our own challenges. Our community and religious leaders are in a position to model inclusiveness, address stigma and encourage access to both spiritual and medical resources. We can become active politically and socially, supporting leaders and causes that will improve the quality of life for Muslims in Canada.