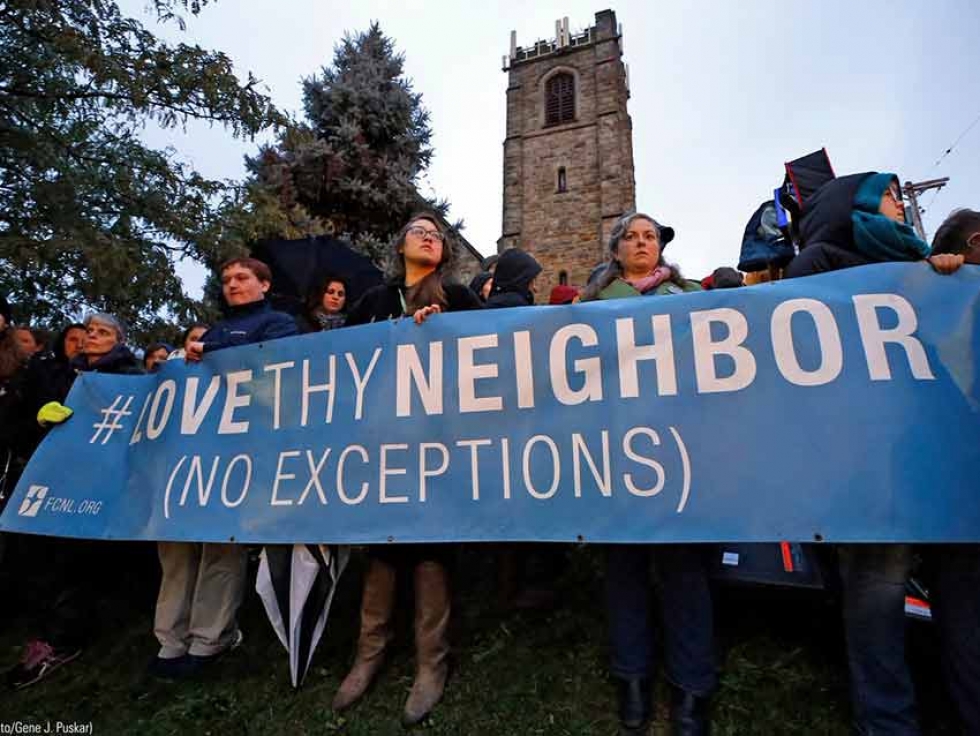 Mourners hold up a sign near the Tree of Life Synagogue in Pittsburgh where a gunman opened fire Saturday, killing 11 people and injuring six others Fox News
28
October
2018

Tree of Life Synagogue Shooting: Ways to Support, Show Solidarity with Victims and Their Families

The MuslimLink.ca team are deeply saddened by the recent mass shooting in Pittsburgh, US at the Tree of Life Synagogue, where 11 have been left dead and 6 are injured, most of them seniors.

Muslim organizations from across Canada such as the National Council of Canadian Muslims (NCCM), Islamic Circle of North America Canada (ICNA),

How can we offer support?

Donate to Support the Victims and Their Families

US based Muslim Crowdfunding platform, LaunchGood.com, is running crowdfunding campaign for the victims and their families, spearhead by the Islamic Charity Celebrate Mercy and activist Linda Sarsour. It has raised over 22K in 5 hours. You can donate to the campaign on LaunchGood.com online here.

As Chris Blauvelt writes, co-founder and CEO of LaunchGood.com:

"_“Jessica’s parents are safe fyi. That’s their synagogue tho”_
This was the first message I received as I turned off airplane mode upon landing in Dubai today. That was followed by a flurry of notifications, Whatsapp messages and more about a deadly, hate-inspired shooting at the Tree of Life Synagogue in Pittsburgh.

Only a year and a half ago we saw a string of Jewish cemeteries desecrated across America, and we were honored to support Tarek El-Messidi (Celebrate Mercy) and Linda Sarsour (MPower Change) launch a historic campaign to repair those cemeteries.

We’re honored to support Tarek, Linda and others once again make a show of interfaith support for the Jewish community in Pittsburgh and across America. We will always have their back in moments like these. Good will prevail, God willing."

GoFundMe has also verified a crowdfunding campaign organized to support the victims and their families. You can contribute to the campaign on GoFundMe online here.

MuslimLink.ca is trying to compile a list of solidarity vigils across the country. If you have an event you would like to add, please email us at This email address is being protected from spambots. You need JavaScript enabled to view it.

Montreal: Sunday, October 28, Vigil for Victims of the Tree of Life Synagogue Shooting at the Montreal Holocaust Museum, organized by various groups

Ottawa: Sunday, October 28, Solidarity Vigil for the Tree of Life Synagogue Victims and Their Families at the Canadian Human Rights Monument, organized by individuals.

Toronto: Monday, October 29, Community Vigil for Victims of Tree of Life Synagogue Shooting in Pittsburgh, organized by the UJA Federation of Toronto and the Centre for Israel and Jewish Affairs (CIJA)

Toronto: Tuesday, October 30, Community Vigil for Victims of Tree of Life Synagogue Shooting in Pittsburgh, organized by If Not Now Toronto and endorsed by CCMW, Noor Cultural Centre, and Sisterhood of Salaam Shalom

London: Thursday, November 1, Vigil for Victims of the Tree of Life Synagogue Shooting in Pittsburgh, organized by Jewish London

Vancouver: Tuesday, October 30, Vigil for Victims of the Tree of Life Synagogue Shooting at the University of British Columbia organized by Hillel BC

Mark Hetfield, CEO of the Hebrew Immigrant Aid Society (HIAS), an organization that the shooter of congregants at the Tree of Life Synagogue obsessively hated because of their work bringing refugees to the US, including many Muslim refugees from the Middle East and Africa, addressed what he felt was th real problem we all needed to be addressing: "The problem here is hate. The problem here is that there is a growing space in this country for hate speech. And hate speech always turns into hate actions. And that is what we are seeing again and again this week. And that is where our focus needs to be, in fighting hate. We can't stand by as individuals, as organizations, or as governments when people spew hatred against Jews, against refugees, against Latinos, against any group that some might see as The OTHER...Anti-semitism was the motivation for this killing but this killer equated Jews with welcoming refugees. This is about fighting all hate."

We as Canadians need to reflect on how to respond to hate speech in ALL of our communities and within ourselves.

In Canada, according to Statistics Canada, the top three communities targeted in reported hate crimes are Jewish, Black and Muslim Communities. The issue of anti-Black racism hate crimes is one I have spoken about at a Parlimentary Press Conference last year.

In 2016, the city of Ottawa saw a series of hate crimes targetting Jewish and Muslim places of worship as well as a Christian place of worship that was targeted because their reverend was Black.

We also have the recent tragedy of the shooting as a mosque in Quebec, also by someone who was obsessed with the issue of refugees coming to Canada.

It is important that we as Canadians do not see this as simply an "AMERICAN" problem.

This problem is a very CANADIAN, and home-grown.