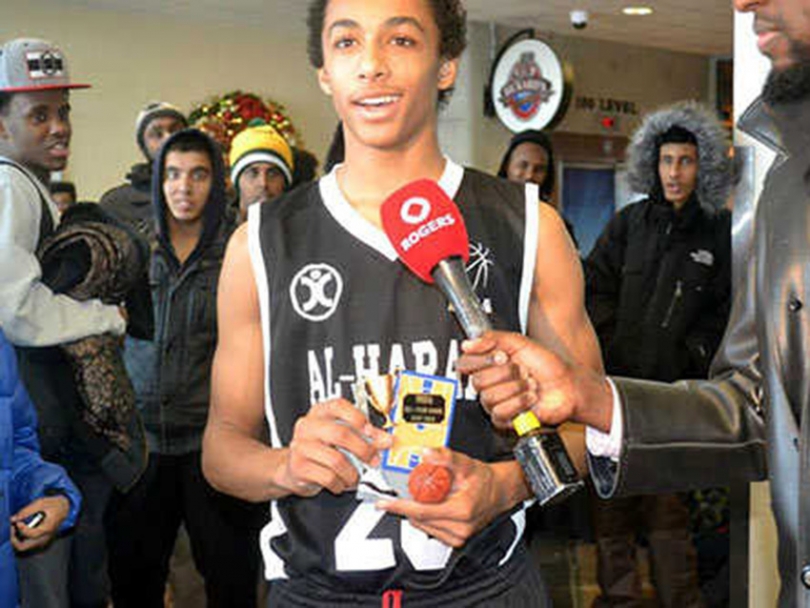 The Muslim Basketball Association plays at the Canadian Tire Centre

The Muslim Basketball Association of Ottawa (MBA-Ottawa) ended its season with a sold-out All-Star game at the Canadian Tire Centre with Team Arafat facing off against Team Baqi.  As an added bonus, those who attended the MBA-Ottawa game were also able to attend an Ottawa SkyHawks game. During the SkyHawks game, the MBA-Ottawa's Most Valuable Player (MVP), Ali Sow,  was congratulated during half-time in front of a crowd numbering over 2,000. The MBA All-Star game was also recorded by Rogers TV to be broadcast sometime in January.

MBA-Ottawa was able to play their final game at the Canadian Tire Centre through its partnership with another Muslim sports organization, ThinkFit. This partnership gave MBA-Ottawa the opportunity to speak with Ottawa SkyHawks' management, who, after hearing about MBA-Ottawa's charitable work with youth, agreed to host the organization's All-Star game at the Centre.

Team Arafat trailed behind with a slow start until the second quarter where they gained momentum and took the win. Team Baqi member Hanad Yusuf, known for his quick blind passes during the game, explained, “[Team Arafat] had more talent, but we had the better team chemistry.” Despite the loss, Amin Miyir of Team Baqi appreciated the opportunity to be “Just a couple of Muslim brothers playing a team sport, having fun in the nation's capital arena in front of friends & family.”

When asked why playing at the Canadian Tire Centre was important, Samiir Sameer, coach of Team Arafat said, “We just wanted to reward them and give them a luxury we didn't have growing up”. He further added that the event exceeded expectations and that the MBA-Ottawa will work to accommodate a greater number of community members at their next event.

MBA-Ottawa's main goal is to use sports as a tool to shape positive Muslim youth culture on and off the court, a method which is particularly effective when trying to engage Muslim boys. Despite its successes, MBA-Ottawa is in need of financial support and welcomes any donations. In particular, it is planning for an upcoming project that will take youth on a life altering journey to the Holy City of Makkah for umrah (pilgrimage to Makkah).

Abdirahman Hussein, a MBA-Ottawa volunteer who regularly delivers religious lectures to youth at events such as Resurrection, described umrah as a chance for youth to turn their lives around for the better.

MBA-Ottawa is always looking to engage as many members of the community as possible in its activities. So whether you are a youth looking to do community hours, a business looking to sponsor a team, or anyone who loves basketball and/or is looking to donate to a worthy cause, here is how you can connect with MBA-Ottawa:

This email address is being protected from spambots. You need JavaScript enabled to view it.

Abdirashid Jama is studying Human Kinetics at the University of Ottawa and volunteers with MBA-Ottawa.