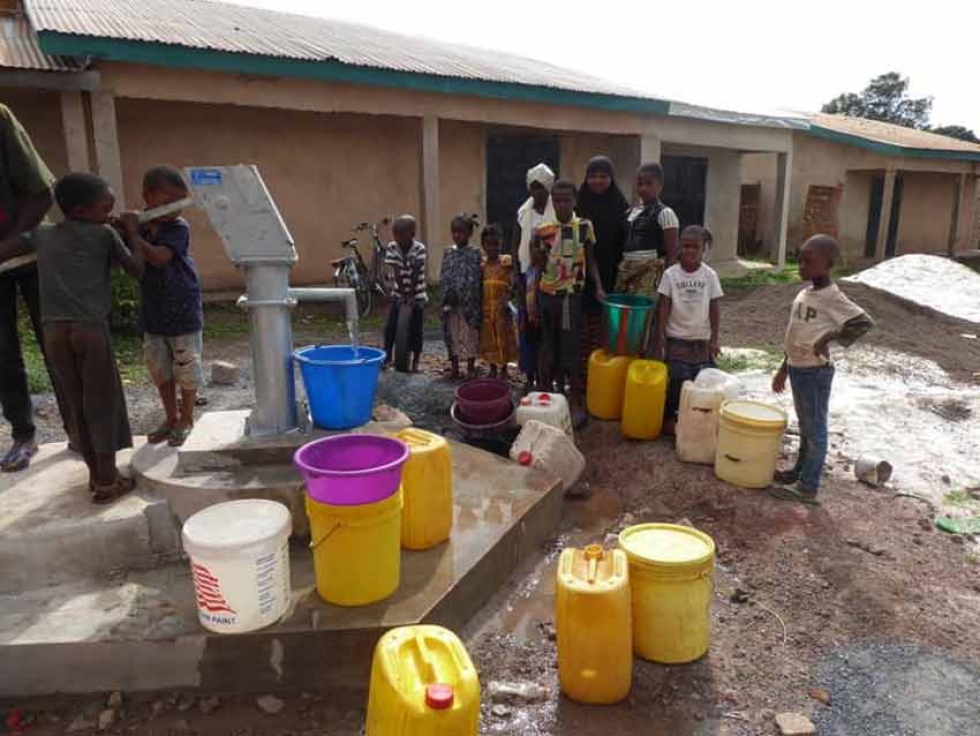 The photo was taken on October 10, 2020 at the well in Labé dedicated to Mamadou Barry. It is a typical family coming to get their provisions from the well. 2Wells Collective
29
Jan
2021

With his murder, this dream, among so many other dreams, seemed lost forever.

However, following articles in LaPresse and CBC about Mamadou Barry's dream to build this well, diverse community members from Montreal and Quebec City came together to fulfill his dream.

Muslim Link has reconnected with one of these community members, Kim Vincent, for an update about this team's accomplishments so far and their future plans.

1. Tell us about your success with the first well to honour Mamadou Tanou Barry.

The first well was completed in May of 2019. It is built on the street entrance of Mamadou Tanou Barry’s mom’s house in Labé, Guinea. It is accessible and free to all and at all times. It is clean well water and has a water tower and cistern that holds 5000 litres and is used daily by nearly 1000 people from the area. We became very close to the contractor in Labé speaking on the phone almost every day sometimes through the night during construction. When they reached water at 80 meters depth, I was on the phone with Mr. Thiam and heard it shoot out into the air as you can see in one of the photos on the 2Wells Collective's Facebook Page. It was amazing! Mr. Thiam passed away that following winter and we were devastated. He was so attached to the project and thankfully was able to complete it. He ran a pipe to the inside of the house so that Mamadou’s mom would have a water tap on his own. He was so lovely and I miss him dearly.

2. Tell us about your plans for the second well in Ibrahima Barry's name?

The late Mr. Thiam's son Halima will be building the second well in Mamou at Ibrahima Barry’s youngest brother’s house. We are so excited about this well and the location is in front of a grade school with 1300 children. All of those families will be able to get water when they accompany the children to school. We estimate 3000 people ! Like the Labé well, it will also be on the families’ property and accessible at all times and for free.

3. How have the families of Mamadou Barry and Ibrahima Barry been involved in both projects?

The families are so amazing. They have been instrumental to the whole process from donating the piece of land to their community, ensuring the area for the well met health standards and assuring the testing of the water. For the well in Labé, they also oversaw construction and upon completion, invited neighbours to come over and they held a prayer ceremony. Again, Mr. Thiam who attended took photos for us and stayed on the phone with me so I could be there. Mamadou’s family members have come over to my house a few times to be with us and chat and eat together. We are family. The story of the plaque is so beautiful also. I really wanted there to be a monument component to the well so that when people drew water they would look at their names and feel a connection to their lives, I met an engraver in Quebec at a home show by total accident. When I asked him how much it would be to have a plaque made I started crying and told him the story of the wells. He also started crying and said he would donate the plaques. He carved them in Quebec graystone which is quarried about a kilometer away from the Mosque in St Foy. So that piece of stone from home now graces the front of the water tower in Guinea. When I received the donated plaque engraved with Mamadou’s name I drove to Quebec City to bring it to his boys so that they could see it. They were small just 3 and 5 years old at the time. Their hands went right for their dad’s name and they were running their hands over it and we all melted. I love them so much. They will see it again when they go to visit their grandmother in Labé and they definitely can’t wait to.

4. How has your team developed over the four years you have been working together on this project?

Our team has changed a bit since the beginning Souleyman Bah no longer works with us since quite early on. We have a new member Nassera Touati, professor from Ecole National d’Administration here in Montreal. Will Prosper and Sophia LaaBabsi also still work with us. And we continue to work closely with members of the families of Mamadou Barry and Ibrahima Barry.

5. Most of those who have supported the project over the last four years have been from the broader non-Muslim Quebecois community. Why do you feel this support has continued over the years?

From the beginning we hoped the project would resonate with the Quebec and Canadian citizens who were not of Muslim faith as we wanted it to be a gift of healing for the Muslim communities. It happened exactly that way in a very organic way. As the second well is more costly than the first, due to massive inflation in the country, we are hoping that all faiths and communities will join us now in this project to ensure its realization. As soon as we published the second fundraiser with Gofundme, our original donors came back and started giving again. This horribly tragic story really hasn’t healed and for those of us who are affected by it, it’s an open wound in our society. Islamophobia is real and painful to witness and it is still a major issue in our societies in North America and Europe and as someone really concerned by this phenomenon, working on a project like this is a healing experience.

6. Is there anything else you would like to add?

Guinea is a country with major infrastructural weaknesses and really no municipal water. Wells are built but are often poorly kept and often become abandoned especially in regions outside of Conakry, the capital. Working with the families ensures that they are going to be well maintained and accessible for many years. It is the well that they themselves will use, therefore ensuring its sustainability.

To continue to support the building of the well in honour of Quebec Mosque Shooting victim Ibrahima Barry, click here