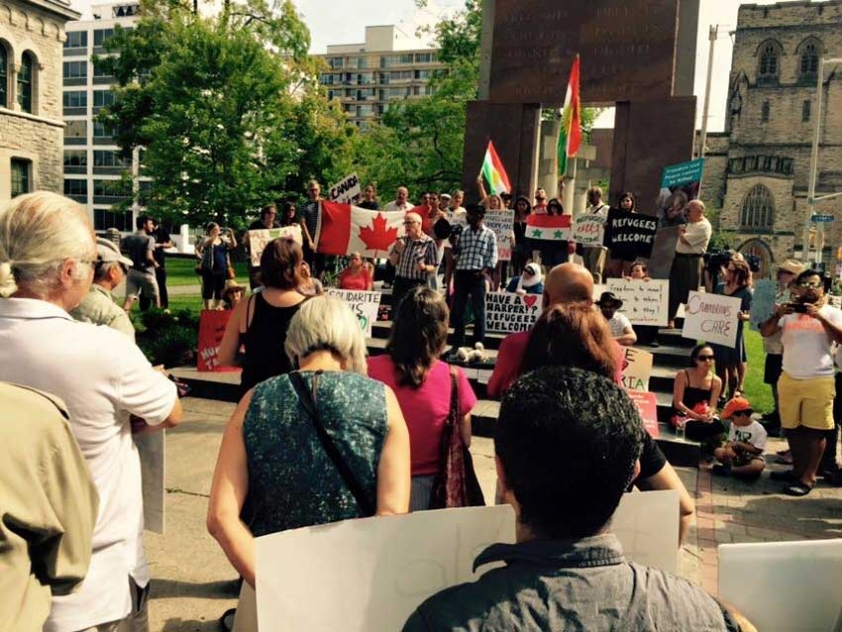 Hundreds gathered in Ottawa for the Refugees Welcome Rally on September 5th. An issue which caused some controversy during the event was the presence of a Syrian flag (visible in this photo). There are currently two versions of the Syrian flag. One associated with the Assad regime, which is the one if the photo, and is red, white, black with two green stars. There other flag adopted by Syrian oppositions groups is green, white, and black with three red stars Courtesy of Michelle Reimer
07
September
2015

The Refugees Welcome rally was sparked by international outrage over the photo of Aylan Kurdi, 3, a Syrian of Kurdish descent, who washed up dead on a Turkish beach after the boat his family was being smuggled in capsized. Kurdi’s photo was taken by Turkish photographer Nilüfer Demir and quickly went viral. When it was discovered that Aylan’s aunt lived in Canada and had been petitioning the government for assistance in getting her relatives here, the story became an election issue.

A positive result of this tragedy has been a dramatic increase in the number of Canadians willing to privately sponsor Syrian families through organizations like Lifeline Syria. The Ontario government announced this week that it will be giving $300,000 to Lifeline Syria to assist with staff and program costs and Toronto’s Mayor John Tory also issued a call for support for the organization.

Syrian Abdulrahman al-Masri, 23, spoke at the Ottawa rally about his experience as a refugee. During his speech he reminded the audience of Canada’s long history of welcoming refugees including over 8,000 South Asian refugees from Uganda, over 60,000 Vietnamese refugees, and over 5,000 Kosovar refugees.

Muslim Link interviewed al-Masri, who is currently studying international relations at Carleton University, about his experience as a recent Syrian refugee to Canada.

During your speech you said you were privately sponsored to come to Canada. How did that work?

I was sponsored by the World University Service of Canada (WUSC). They have a program called the Student Refugee Program. This program sponsors students who were studying in their countries of asylum. Each year the program brings in about 80 students to Canada from around the world. It is the only program in the world that combines education and resettlement so when the student comes to Canada he or she gets permanent residency along with a full year of education.

Along with being a student you are also a freelance journalist. How long have you been working as a journalist?

I’ve been reporting for four years. I write weekly for the Middle East Monitor and the Arab Weekly. I used to write for USA Today back when I was in Jordan. I got involved with journalism after I left Syria because I felt there was a need to do more accurate reporting to tell the stories that have not been told.

Why did you feel you had to leave Syria?

It’s an uncomfortable political environment. I was involved in the political process back home and unfortunately the government response was really harsh. Due to other concerns as well I had to flee, so I went to Jordan.

What is the situation of Syrian refugees in countries like Jordan?

In Jordan, there are at least 1 million Syrian refugees. They are protected by the UNHCR. Jordan, Lebanon, and Turkey have not signed the 1951 Geneva Refugee Convention. That means that all refugees in those countries are not literally refugees, they are asylum seekers. They are protected by the UNHCR. They do not have any access to work permits. They only have what the UNHCR provides them with, which is about $30 Food Vouchers per person. All of them have to work illegally. Turkey has been more hospitable as it tends to turn a blind eye to illegal work, however in Jordan and Lebanon it is stricter. People have been in this situation in these countries for three, almost four, years now.

How do you feel about the Canadian government’s current position on the refugee crisis?

Canada is known for that type of humanitarian assistance. However recently, we have seen very little. We have heard a lot of promises but no real action was taken. I hope that in the coming days more action will be taken.

In your speech you brought up the fact that so far about 2,300 Syrian refugees have made it to Canada but the majority were private sponsorships.

I believe that about 70% were private sponsorship. Only about 600 or so were government sponsored. So, Canada as a state isn’t doing much.

At one point it appears that Canadian officials wanted to prioritize taking in Syrian religious minorities which would mainly be Christians. What is your take on this?

What do you think about the fact that it took Aylan’s photo to make the refugee crisis a mainstream issue?

Unfortunately, it took this picture to wake us all up. Everyone knew about this crisis but put on blinders. It’s not happening here so it’s not really “happening”. We care more about celebrity news so we don’t really see the real news. This picture has made front pages everywhere in the world. Now that everyone has seen it people feel they need to do something. People can at least write to their MPs, write to their Councillors; they can protest, they can rally, they can sponsor a family.

There is an important program happening in the GTA called Lifeline Syria, they are doing a great job. I hope that one day they can be the sponsorship agreement holders so that they can sponsor as many refugees as possible. We need something like that here in Ottawa. We should keep pushing government but we can also do something through projects like this.