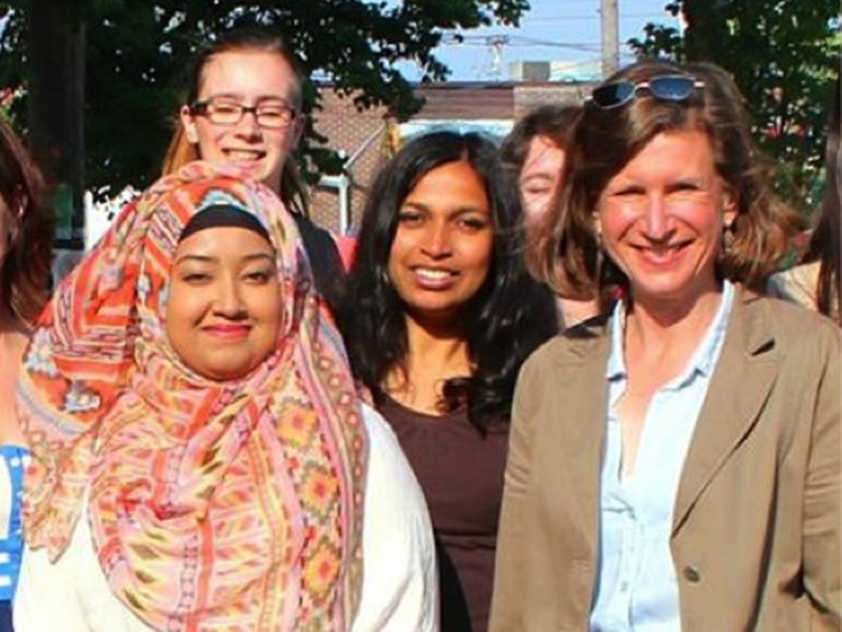 There are concerns that younger voters might not be very engaged in this year’s Ontario provincial election. Muslim Link has sought out young Muslims in Ontario who are working, volunteering, or running with each major party in the provincial election to get their opinion about why it is important to be engaged in provincial politics. Our second interview is with Samiha Rayeda who is volunteering with New Democratic Party (NDP) Candidate Jennifer Mackenzie who is running in the riding of Ottawa Centre.

1. Tell us about yourself.

I am a 20-year-old student at Carleton University, going into my third year of study. My program is a B.A combined honours program in Law with a concentration in Law, Policy and Government. I came to Carleton from Toronto, where I grew up for most of my life but I was born in Bangladesh.

2. Did you grow up in a family that discussed Canadian politics at home?

Not really, my parents were more interested in Bangladeshi politics, which I never took an interest in. I’ve always been interested in current events and the news, which kept me informed in politics but I first got involved in politics when I was in grade 10 and volunteered with a local NDP candidate for a provincial by-election. I wouldn’t say my political views at the time were specific to one party, but I volunteered with the NDP simply because the election office was closer to my house than the rest.

3. Do you feel that you are more aware of Canadian politics than your peers?

I have some friends who are not very aware of Canadian politics, mainly because it is not something they take an interest in, or they feel that what happens in politics does not affect them. I definitely think this is because when election season comes around, the main issues are the economy, jobs, taxes, etc. things that students, who are busy with their personal lives do not have time to focus on. If anything, a party will mention someone about tuition, but that issue is never at the forefront of their discussions, so students feel that they are not relevant. However, since coming to university, I have surrounded myself with politically active students, and I see what a difference students who are politically engaged can make just by getting involved and having their voices heard.

4.  Why do you think it is important for more young Muslims to pay attention to Provincial Politics?

The issue of voter apathy is something that affects all youth; many just don’t feel that they need to vote or that it is important. For Muslim youth this is especially important because there is already a lack of representation for us in provincial and federal politics, and by not even taking the time to vote, we are adding to that problem. I definitely encourage all youth, and Muslim youth especially to vote and make their voices heard, because that is the only way to ensure that we are represented.

5. What are the priority issues for you in this election? Why?

The main issue for me is tuition. Being a student in Ontario, which has the highest tuition rates of any other province in Canada, is something that is becoming increasingly difficult, and so I will vote for the party that has the most student-friendly platform. Currently that party is the Ontario NDP, which is the only party to say that they will freeze tuition fees, which have been steadily rising every year, and also eliminate interest on all provincial student loans, which of course, as a Muslim is very appealing.

Other issues that I am also paying attention to this election are jobs and public transit, both of which affect me directly.

6. Why did you choose to work with this particular political party?

I am a volunteer with the local Ontario New Democrat Party candidate and I have always been a supporter of the NDP. I feel that the NDP are the best party to represent my economic and social interests. Thus, I got involved and decided to lend my time to the candidate. Also, I am a co-chair for the Carleton University NDP, and so I felt that I needed to set an example for all the other members of the club to get involved in local politics.

The candidate I am working with is named Jennifer McKenzie. She is the candidate for Ottawa-Centre. I think Jennifer’s strongest quality in this election is her diverse background. She is professionally trained as an electrical engineer, working for 20 years in the technology sector and was the Vice-President of a leading high-tech firm in Ottawa. She left her job to care for her three young kids, and while doing so, got involved in the school board, which shows how much she loves to get involved and improve her surroundings. For the past seven years, Jennifer was an Ottawa-Carleton school board trustee and in 2010, she was elected Chair of the Ottawa-Carleton District School Board. In this role, she currently serves over 70,000 students in 147 public schools. Thus, I think Jennifer’s diverse background; working in a corporate firm as well as the school board really shows that she can properly represent the diverse riding of Ottawa-Centre.

8. Tell us about the riding you are working in.

Ottawa-Centre is a very diverse riding. It covers a large portion of the downtown core, as well as neighborhoods such as Chinatown where the office is located, Little Italy and Carleton University. There is a mix of residential neighborhoods, businesses and schools in this riding, which makes Jennifer McKenzie a perfect fit to represent this riding.

9. Explain your role as a volunteer with this campaign.

10.  Has the candidate you are working with done outreach with Muslims in the riding?

Yes, Jennifer McKenzie did organizing with refugee communities to ensure children could have better access to education.

11. Are you concerned that many people your age are not voting?

Yes, there is a huge problem with students and youth not taking the time to vote, and that is a problem of being not informed enough and also youth feeling as though their vote is not important enough.

12. What changes do you think are necessary in order to get young Canadians more engaged in Provincial Politics?

In order to change this, political parties need to focus on issues that affect young people, such as jobs and tuition and always speak about them, ensuring that youth know they are valued voters. I also think universities also need to get more involved, such as the student unions to educate students on voting, such as why they should vote and how to vote.

14. What are your plans after the election, whether or not your candidate wins?

After this election, I plan to get involved and help out with the municipal election, which is in October.