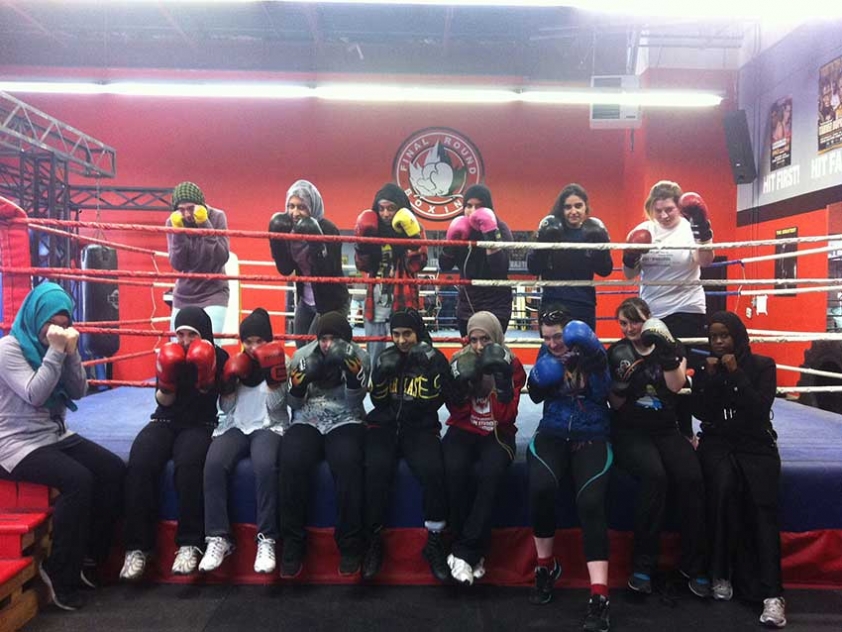 Aaida "Mombasa" Mamuji with participants in the Muslim Women's Boxing Program at Final Round.
20
Apr
2015

Muslim Women’s Boxing Program Back for a Fifth Round

Aaida “Mombasa” Mamuji is an amateur boxer who, while studying for her PhD at the University of Ottawa, began a program training Muslim women at the Final Round Boxing Club. Now that she’s left Ottawa for an exciting position at York University, she is happy to see the program continuing with a new trainer, and former participants as coordinators. Muslim Link interviewed Mamuji about what she feels the program has achieved over the last four years.

How did the Muslim Women’s Boxing Program begin?

The program started in 2011. It was a bit of a coincidence. Final Round was going bankrupt and we just established MAC Youth Sports and wanted to provide programming for women. Imane Adref and I came up with the idea to do a fundraising initiative where we would use Final Round space for free for two hours on Sundays, and would ask for affordable membership fees from the participants who attended the program. Whatever money we raised would go to Final Round, and we would be able to use the space for free. The first round was a mix of boxing and yoga. All subsequent rounds have just been boxing.

I developed the program with my coach Eric Belanger who is also the owner of Final Round. Participants learn basic boxing technique and there is a strong emphasis on cardio. By the end of the program, participants have enough skills to do contact sparring.

What were some unexpected lessons you have learned from the experience both as an athlete, a woman, and a Muslim?

The amount of support from both the Muslim and wider community has been overwhelming. I also didn’t expect that sharing my experience [as a boxer] would be a source of motivation to so many women, Alhamdulillah (Thanks to God).  I have received positive messages and messages of support from women around the world, Alhamdulillah. I also didn’t know how much impact the program would have on participants. At our final session of Round 4 held on March 29th, participants shared reflections, and they spoke about how boxing has made them feel stronger and more able to overcome obstacles. It was an emotional and uplifting session. In the program we also try to connect the attention we give to our physical bodies to our spirituality. When we give care and attention to ourselves, we are better able to be there for those around us. Feeling externally strong goes hand in hand with feeling internally strong, and each augments the other.

Why do you think it was important to give back to Final Round for each program session?

With the money we raised we have been able to help the club purchase equipment and also have supported Final Round’s program for at-risk youth. Recently, we raised $2,115 for that program. We are particularly happy to support the youth program; it is an important community initiative. It is currently a three-month trial with an anti-gang focus where youth younger than 21 are able to use the club for free in an attempt to get them into a safe and healthy space other than engaging in unhealthy habits and practices. There are a number of young offenders participating. Eric Belanger developed the program. Final Round currently has 50 youth using the program, and Eric's goal is to have 200 people eventually. CBC Radio has featured the youth program a number of times.

You have received media attention as a hijab-wearing boxer. What have you appreciated about the attention and what would you hope media would do better in the future when covering hijab-wearing athletes?

The media coverage has been great! Oftentimes media sensationalizes the hijab and our ‘Muslimness’. The Ottawa Sun profile of me however focused on me as an athlete. The fact that I am a Muslim woman that wears the hijab was not the main focus, and I appreciate that very much. It was about me and my love of boxing. The CBC coverage of our women’s-only boxing program was focused almost exclusively on the fact that we are offering a boxing program for women who are Muslim, and where the majority of participants wear the hijab and are able to take it off at the boxing club when we run the classes. We had hoped that the coverage would focus on our fundraising for the at-risk youth program, but that was not covered.

You have moved on but the program is continuing, how is that possible?

Nuha Misellati, Imane Adref and Fareda Jaffer, two former participants, are coordinating the program. They loved the program so much they wanted to see it continue and stepped up when we didn’t have anyone to continue the program. Rosie"Timebomb" Thomas, who is a professional boxer, with over 50 amateur fights, is the new trainer.

The Fifth Round started on Sunday, April 19th and runs on Sundays at 10 am. There are still spots open for those who want to join. For more information about the program check here.