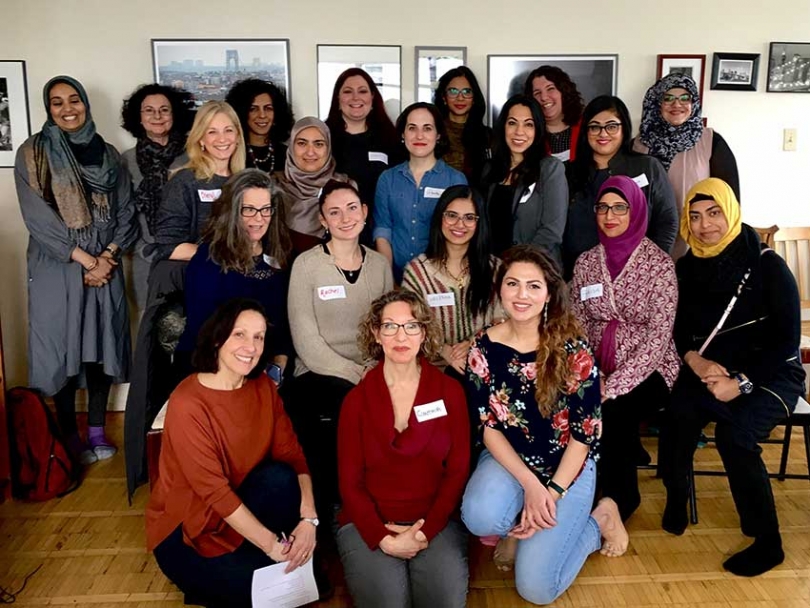 Have you ever noticed how acts of hate can spur acts of love? With the establishment of the Toronto chapter of the Sisterhood of Salaam Shalom, thirty-four Muslim and Jewish women have come together to support each other against hostile acts directed toward both groups. One of the Sisterhood’s largest chapters and the first chapter in Canada, the Toronto group meets regularly to talk, share rituals, and to build relationships across religious lines.

Founded in January 2017 by Cynthia Levine-Rasky and Sabreena Ghaffar-Siddiqui, the Toronto chapter meets on a monthly basis in rented space downtown. Since the first meeting of March 5, the women’s camaraderie was palpable. Members range in age from 23 to 67, and they differ in ethnic identity and religious practice. As a result, there is always a lot to talk about: childhood and family, positive and negative religious experiences, encounters with other Muslims and Jews, and with other groups. Plans are underway for social action that may take the form of charitable work and political activism. Such plans could not be timelier.

A Statistics Canada report, ‘Police-Reported Hate Crime in Canada, 2015’ released on 13 June 2017, indicates that police-reported crimes motivated by hate against the Muslim population rose 61% in 2015. While the number of crimes targeting the Jewish population declined between 2014 and 2015, more Jews were targeted in both years than any other religious group. Hate crimes can involve violent offences such as assault, uttering threats and criminal harassment but they also frequently involve vandalism and graffiti.

The Sisterhood of Salaam Shalom was founded in New Jersey in 2010 by Sheryl Olitzky and Atiya Aftab. Its mandate is to promote trust, respect, and relationships between North American Muslim and Jewish women. Members work together to challenge anti-Muslim and anti-Jewish sentiment and to engage in social action to benefit the local community. Expanding from 50 to 150 chapters after the election of President Donald Trump on 8 November 2016, the organization’s rapid growth demonstrates people’s urgency to challenge social divisions by making connections to each other.

“What happened in the United States had a ripple effect around the world,” says Levine-Rasky. “Like elsewhere, in Canada, we are seeing a rise in racist activity especially against religious minorities. People should not give in to fear. When Jewish and Muslim women stand together, we make a strong statement against fear.”

“Foreign conflicts have at times put a strain on Muslim and Jewish relationships at home,” says Ghaffar-Siddiqui. “The sisterhood not only dismantles the misconception that we are unable to get along, but it also aims to forge meaningful ties where they may have not existed otherwise. The love, compassion and patience that come so easily to women are essential to strengthening Muslim and Jewish bonds in the wider community. It is only with such solidarity that we can fight hate against both groups.”

For more information or to get involved contact This email address is being protected from spambots. You need JavaScript enabled to view it. or the Sisterhood Facebook Group here

Sabreena Ghaffar-Siddiqui is a PhD Candidate at McMaster University and researcher. She is the communications lead for the Canadian Council of Muslim Women (CCMW). She is also the co-chair of a women's interfaith initiative in Toronto named the Sisterhood of Salaam Shalom (SOSS).