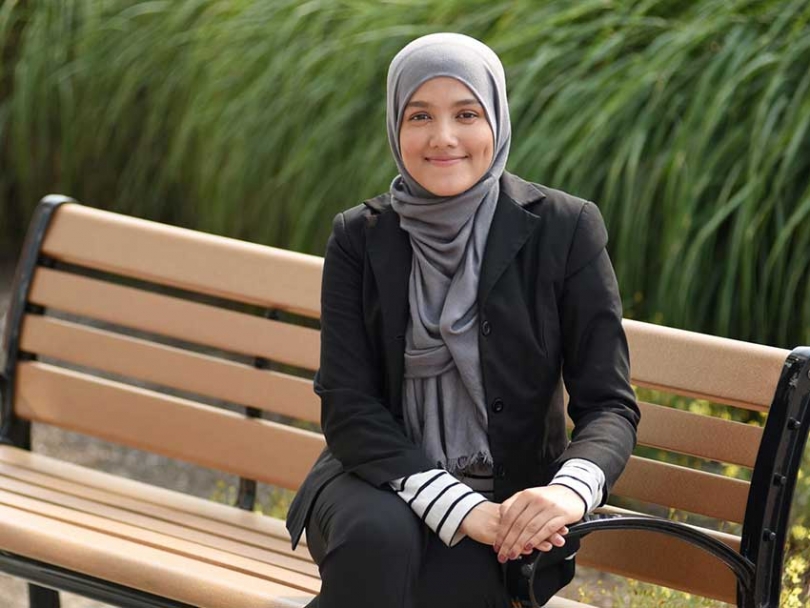 Yasmine Ullah is a Rohingya Canadian living in Vancouver, BC.
13
Sep
2017

In light of the current humanitarian crisis and violence being experienced by the Rohingya community in Myanmar/Burma and Bangladesh, Muslim Link is sharing the stories of Rohingya refugees who have made a home in Canada.

Yasmine Ullah is a Rohingya refugee living in Vancouver, BC. She is part of a Rohingya women-led initiative, spearheaded by her mother, who are crowfunding on LaunchGood to help support Rohingya community members who are staying in Burma amid the current violence.

Yasmine has been speaking publicly about the plight of the Rohingya, including the dire situation faced by her own family members currently in Burma, at local mosques and to mainstream media such as CBC.

My name is Yasmin Ullah, I’m a Rohingya, born in Rakhine State, and have been blessed to have become Canadian just last year. I became a refugee in Thailand around the age of 3 along with my parents. My extended family are still back in Burma, and it has been a source of anxiety for us every time we see some new footage or news about the situation coming out. We just keep praying that we won’t just wake up one day and see their pictures online in a dire situation or find out that they have passed away. It’s a chilling feeling to be aware that that can happen anytime especially since the military has started surrounding the villages all across Northern Rakhine State, and carried out their attacks, and lighting the houses on fire.

My family fled for a week, and decided, but they would rather go back home. They are amongst the very few that have decided that rather than fleeing, they would prefer die in their homes, the place of their own history and roots, even though we are ready to help them to get out. All the landmines planted around the routes to escape and crossing of the border perhaps frightened them as well. They may not think that they have enough means or resources to make it across since my grandmother cannot really walk, so that would mean my uncle would have to carry her all the way through. He has his own sister and two babies also. On top of that he has to take care of his pregnant wife, she’s due very soon. It’s not a very easy decision for them to make, just as it is not easy for us to accept it. This is just one story from one of the closest family members that we have there.

It’s a constant fear, they live in fear, and we do too, we live in fear of losing them amid this senseless violence, and criminal attempt to murder the Rohingya by the Burmese regime. It left us with this sense of wanting to protect our loved ones so badly, but all we could do is to yell at the top of our lungs hoping it would be loud enough for those in authority to hear. It’s a horrific plight that can only end with an international intervention.

Why did your family leave Burma? Why did you come to Canada?

My parents decided to leave Burma because of the increasingly restricted rights and freedom, and the future that looked very dim for all of us. We just thought that anywhere is simply better than a place infused with hate and human rights violations. We lived as refugees in Thailand, and we struggled. We waited desperately for 16 years, scared of what life would bring. AlhamduliAllah, my father met a couple of very kind Canadian NGO who were the force behind getting us to Canada, and getting us the help that we needed within the country until we were able to get back on our feet.

What has life been like for you and your family in Vancouver?

It was difficult at first like any refugee would have already told you, but as time has progressed, we are more and more comfortable in our own skin. We are still figuring things out for the first time after six years of arriving to this country, but the fact that we have access to all these rights and freedoms just never ceases to amaze me. I can even criticize people in authority, or file a complaint against anything I see as misconduct. It’s something we are still in awe of because we were never able to do those things. We just feel that many people are taking this ability for granted.

What do you want Canadians to know about what is happening to the Rohingya?

I’m sure that most of us have seen one video or another of the atrocities our Rohingya brothers and sisters have been facing, but I don’t want us to think of this as another affliction we can’t help or do much to end.  Yes, Rohingya may live on the other side of the world, but the fact that they are human, just like us, longing to breathe free, should be enough for us to take actions to end their pain and suffering. Innocent lives no matter of what race or colour, should never have to endure what the Rohingya have been through. I hope, that by seeing me, Canadians would be able to relate and understand that after all, Rohingya are not so different from them.  We work hard, and are ready to contribute to the society just like everyone else.

As the Burmese regime try to convince the whole world that their crime against humanity is a legitimate one, I hope Canadians won’t fall for their propaganda. Hate and peace simply do not co-exist, so we can’t let those filled with hate dominate us.

It’s very Canadian-like to be concerned about other human beings. I hope that all of us see this as an opportunity to raise our voices, and let our elected officials know that we do not want to partake in their silence. Being silent is being complicit. To end this full scale genocide, we need more involvement, and awareness from everyone, so our government, and others would act, and intervene to end this plight of the most persecuted people in the world, for them to be able to return home, and enjoy full rights as Burmese citizens.

Most of the Rohingya refugees have always said the same thing, “if we could return home when the country gets better, we will”.

Why did you and your mother decide to get involved with crowdfunding for members of the Rohingya in Burma?

I feel that this is an obligation as a Rohingya living in such comfort, to not only let the world know what is really going on in Burma, but to create a way for people to help as well. It is the least I could do for my people. I will probably feel guilty for the rest of my life if I have not done anything, at least to alleviate their pain. My mother suggested that we raise some funds to help as many people as we can, and I agreed. This feels more like an absolute responsibility rather than a choice. At the end of the day, I would have to answer to God about what I have done for my people knowing what I know, seeing what I saw, so I need to do as much as I can.

This crowdfunding initiative is led by Rohingya women, why do you think that is important?

As a Rohingya, I have always seen more men at the forefront, fighting for our rights and freedom to exist in Burma. I think we can all benefit from a little bit of balance. I believe that as women we can bring more to the table, and perhaps become the voices for Rohingya women who are suffering in silence. My mother was the brain behind the project, and this crowdfunding (may Allah reward her immensely), and she has always pushed me to step forward in helping others. When horror like this happen, it is always women, children, and the elderly that are affected the most, so I thought, who better to advocate for them other than women. It’s the balance that may have been needed for a long time, and we hope that we could inspire more Rohingya women to join our cause or start their own for the betterment of our people.