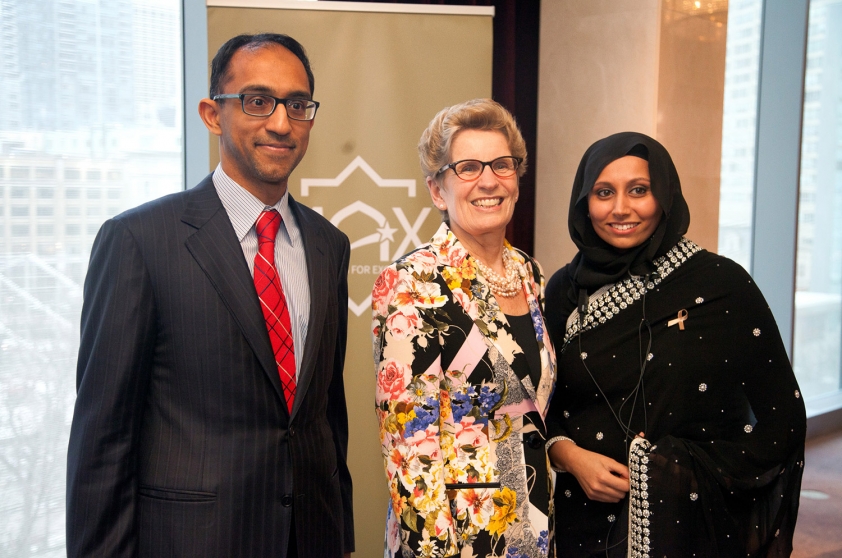 Like other communities of diverse faiths, Muslim Canadian have made great contributions to Canadian society. However, focus tends to fall on the association of Muslims with terrorists rather than Muslims as positive community builders and contributors. To turnaround this narrative, a group of Muslim Canadian professionals in Toronto organized the Muslim Awards for Excellence (MAX) Gala on March 24th at the Ritz Carleton to spotlight the achievements of Muslims in Canada.

Finalists for the awards were selected based on online voting and a panel of judges.

Co-founder of the event, Aazar Zafar, shared that they were there, “to celebrate the good that Canadian Muslims have done in our community.”

Award were granted in six categories, which included Woman of the Year and Entrepreneur of the Year. Scholarships were also awarded to high school and university students in the community.

Renowned Muslim Canadian journalist Haroon Siddiqui, while talking of the need for recognition of Canadian Muslim contributions appreciated the initiative but emphasized the need to continue such an initiative in a broader way. “Muslim Canadian contributions should not be recognized just with awards ceremonies, but in public policy that affects Muslims and all minorities in this country,” he explained, “Then every Canadian will recognize that Muslims have contributed in effect for the betterment of all of Canada.” Siddiqui believes that changing perceptions of Muslims and challenging Islamphobia cannot be addressed by one event, “There is no silver bullet for these things; it’s a matter of continually plugging away, so this is one important step in the right direction.”

One of the keynote speakers, Zaib Sheikh, Toronto Film Commissioner, disagreed with the idea that Muslims are always represented in a negative way in the media, “My experience, Alhamdulillah (Thanks to God), is that Muslims can be actually depicted in a very positive light and the only way to really assure that is to connect to the media, be a part of the media, speak with the media and speak for the media…In this day and age, Muslims can’t just be so fixed on defending themselves or explaining how amazing Islam is.”

Lawyer Denis Edney, best known for representing Omar Khadr, received the MAX Gala/KSM Law Friend of the Community Award, recognizing the contributions of non-Muslims who have demonstrated outstanding service to the Muslim community. In his acceptance speech discussed the long history of non-Muslims supporting Muslims dating back to the time of the Prophet Mohammad (pbuh) "In fact, the non-Muslim uncle of the Prophet Mohammed (peace be upon him) Abu Talib is considered one of the best friends and first supporters of the early community. We are also familiar with the story of the Muslims who fled persecution in Mecca and sought refuge in the Christian Kingdom of Aksum, present-day Ethiopia and Eritrea (formerly known as Abyssinia)."

Mohammad Nadeem, Senior Manager at the accounting firm KPMG, a sponsor of the MAX Gala, shared how through his achievements he helped change the perception of Muslims at KMPG, “What ordinary Canadians know about Muslims they see in news, but if we are here physically and are able to tell them through our work what it means to be a Muslim, which is caring for the entire community, I think this is going to make a huge difference.”

Dr. Danyaal Raza, recipient of MAX Platinum Award of Excellence, shared his perspective on how the awards can have a positive impact on people’s perceptions, “I think events like tonight really help to highlight how we have always been here and have always been contributing members of society and lot of narratives that are Islamophobic, [that] we hear in the mainstream media, really have no merit.”

Ryhana Dawood, recipient of the All Star Scholarship, believes that the gala, if publicized, can play a big part in combating Islamophobia, “It’s really going to open up people’s eyes especially with publicity, where they see that Muslims are actually really involved in their communities and doing good things, not only for Muslims but for the general society."

Premier of Ontario Kathleen Wynne attended the event and thought the event was a great idea, “We all need to push back against hatred and intolerance. Our responsibility is to model a story that shows our capability to love." Other distinguished guests included Toronto Mayor John Tory, a number of federal ministers and Members of Parliament were in attendance, including Chrystia Freeland, Minister of International Trade, Omar Alghabra, Parliamentary Secretary to the Minister of Foreign Affairs (Consular Affairs) and MP Ahmed Hussen.

Keynote speaker, Dr. Mohamed Lachemi, President of Ryerson University, shared his story of beginning in a small village in Algeria and explained how his thirty years of academic excellence in Canada were blessed with the support of the diverse community. “Education helped me to become a global citizen,” he shared, “If you want to be part of building this great country and city, reach out and embrace it.”

Lawyer Hussain Hamdani, recipient of Max Platinum Award of Excellence, hopes that this award inspires others to work and sacrifice for the community, “I am hoping [what] it does is that people here, that are younger, high school, university students or fresh graduates, that they get inspired and carry that mantle forward and by them doing so they will be good ambassadors for the Muslim community.”

Malak Elbatarny, recipient of another All Star Scholarship, was delighted with her win, “This award will help me to continue my studies and hopefully continue to give back to the community.”

Prime Minister Justin Trudeau made a special video for the event, which can be viewed here.

To learn more about the award finalists visit the MAX Gala website here.