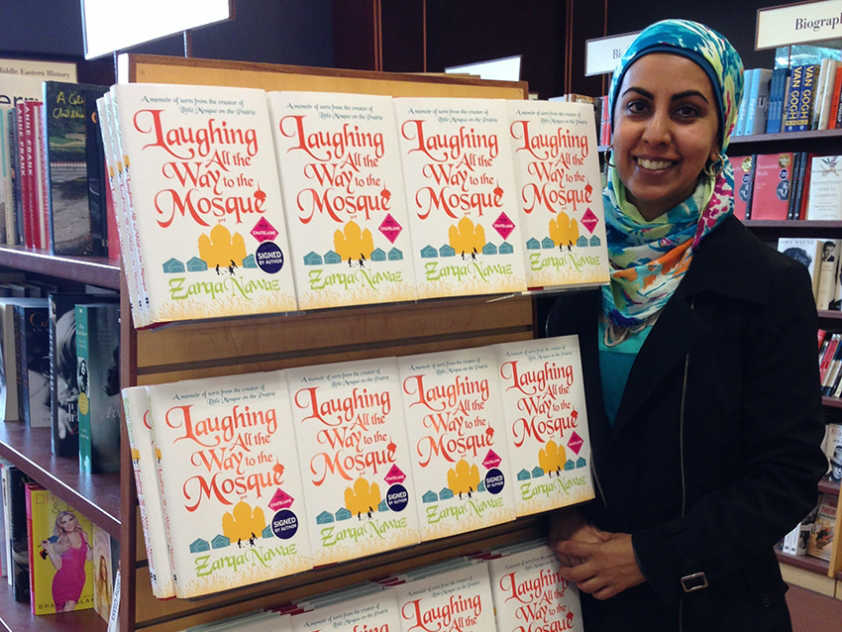 Zarqa Nawaz has written a memoir, "Laughing All the Way to the Mosque".
24
July
2014

Zarqa Nawaz is probably the funniest Canadian Muslim woman in the country.

Even her Skype ID is quirky, naming a part of her foot. “Don’t ask!” she writes in an email, no doubt with a chuckle. Nawaz, the creator of the hit series Little Mosque on the Prairie, is currently promoting her new book which offers yet further glimpses into her (hilarious) experiences growing up in Canada.

She spoke via Skype with Muslim Link.

What made you decide to put out this book?
I wrote a book of intellectual essays and my publisher said ‘you should stick with what you are good at’.

How did you choose the topics you would explore?
I think basically I had chosen all these intellectual-essay like topics, with little bits and pieces of my life in between. I just pulled those out.

You write that this memoir is written for both the Muslim and non-Muslim reader in mind. How did you manage to speak to these two very different audiences at once? I was just writing about things that are important to me, like hijab, 9/11, the water jug, the jinn. Each chapter is so different from the other and it seemed to have wide appeal.

You write about the initial reaction to Little Mosque on the Prairie, that you received a lot of heat for it. Why do you think that was?
Because I think it was such a new thing for the community to see a comedy about itself.  We didn’t have a Cosby Show moment. There was no baby step; we were never seeing Muslims on television other than on the news, and all of a sudden there we were. And some Muslims come from cultures where criticism has been banned and it’s really dictatorial and authoritarian and criticism isn’t welcome; people are thrown into jail for it. And suddenly you have a show that is satirical and that was really hard to see. People thought it was making fun of Islam.

By the time the criticism came, it was too late, we had filmed the first season. I had to endure it.

There’s a vivid scene you describe in the book. You’re attending a film festival where your first documentary, “BBQ Muslims”, has won an award. But, because you were then a mother to a one-year- old, you’re leaking milk the whole time. How has it been balancing this incredible career and motherhood?
It helps having a very supportive husband, one who is incredibly tolerant and incredibly patient. I would spend six months away in Toronto and he cut back on his hours; he’s a psychiatrist. We hired help for cooking and laundry. It was quite traumatic for the children, who were seven, nine, 11 and 13 at the start of the series. We had to figure out a way to balance things.

What new projects are on your horizon?
When things calm down, I’ll have to speak to my agent and publisher. Maybe a television show based on the book, or a comedic novel.

What advice would you offer people who want to pursue careers in the arts?
I would say it is a tough field, it isn’t like medical school. You can’t come out with six figures, and you have to really want it more than anything else. You have to create your jobs continuously, you have be very driven and very committed and it is tough financially. There is a high failure rate and you have to go into it with eyes wide open.

This interview was edited and condensed.

Once we got to the site, everyone unpacked and chose cabins. As we ate dinner, I planned the next morning’s events. I went to find Dwayne, the camp cook, to ask if he had any cardboard boxes.

Dwayne was in his early thirties, and had clearly never met any Muslims before. We were like a group of Martians who had just landed on his planet, and he was very excited.

“Why do you need boxes?” he asked. “It is a Muslim thing? Do you use them in your worship rituals?”

“No, I need them for a camping exercise tomorrow,” I said. Dwayne looked disappointed but found me a pile of cardboard boxes.

After breakfast the next morning, Ibrahim and Lumya came to find me.

“So what’s happening?” asked Ibrahim nervously. “Are we going to have Islamic lectures like the last camp I went to?”

“You heard Bother Abdullah,” I said. “He didn’t want a regular Muslim camp, he wanted an exciting one.”

“Muslims do lectures about how to be better Muslims,” said Lumya, nodding knowingly.

“Yeah, well, this camp is different,” I said, wondering why it had to be.

Excerpted from Laughing All the Way to the Mosque by Zarqa Nawaz (c)2014. Published by HarperCollins Canada. All rights reserved.

Want to win your own copy of Zarqa Nawaz’s memoir? Visit Muslim Link’s new website, www.muslimlink.ca, and subscribe to our Online Snapshot. If you subscribe between July 25th and August 5th your name will be automatically entered into a draw for the book. The winner will be notified on August 6th.