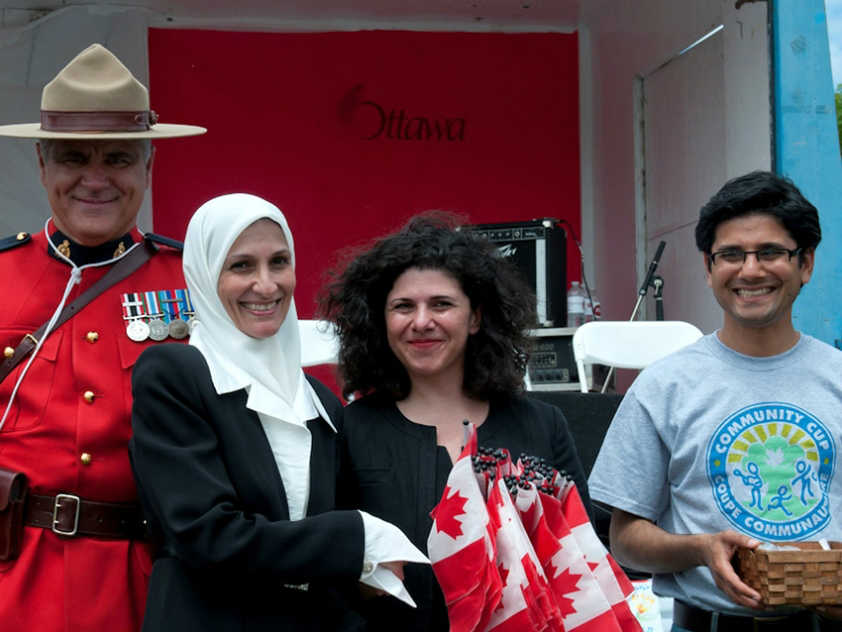 Is Ottawa Welcoming to Immigrants?

Is Ottawa a truly welcoming city?” This question is top-of-mind in the run up to Welcoming Ottawa Week (WOW) 2014.

Let’s take a moment to ponder on our history, how Ottawa became home to people from so many different countries, and what we can do to persuade more immigrants to make Ottawa home. Mayor Jim Watson spoke for many of us in this proclamation launching Welcoming Ottawa Week in June 2013: “Citizens should be encouraged to recognize the value of diversity and the contributions of immigrants in our community’s economic, cultural, and social life.”

Ottawa and its surrounding regions were inhabited by the Algonquin People when the Europeans settlers first arrived here. The largest initial settlement came from Scottish workers brought in to work on the Rideau Canal in 1827.  Later on, the profitable lumber trade also attracted French and Irish immigrants to settle in this small town.  When Queen Victoria declared Ottawa as the capital for the Dominion of Canada in 1858, it brought in a new wave of migrants eager to work in the nation’s capital. The fact that it was the nation’s capital ensured Ottawa’s population growth would remain steady throughout the early 20th century.

Until late into the 20th century, Ottawa’s immigrants were generally drawn from Europe. This started changing slowly as the rest of the country saw a rapid increase in Asian and African immigrants.  Ottawa’s population started to diversify when large numbers of Caribbean and Arab immigrants began settling down here.  By the late 70’s, there was enough openness to diversity to allow then Mayor Marion Dewar to mobilize Ottawa residents to welcome 4,000 refugees from Vietnam to settle in Ottawa in 1979.  Mayor Dewar`s leadership and the hospitality of Ottawans had a lasting impact on our city in terms of enabling Vietnamese families to settle, make connections and integrate into the city; and in terms of causing more newcomers to be attracted to Ottawa.  In subsequent years, as in the rest of the country, Chinese, South Asian and the Filipino ethnic populations dominated the immigrant stream. In a span of 10 years (1996- 2006), the proportion of “visible minorities” in Ottawa jumped from 14.5% to 19.4%.  Contributing to the growth of visible minority residents in Ottawa is a large number of African immigrants and refugees from Somalia, Sudan, Congo, and Cameroon who settled in Ottawa throughout the 1990s to this day.  International students from all over the world continue to be attracted to Ottawa’s prominent colleges and universities, making Ottawa one of the top destinations in Canada.

Despite this impressive growth in diversity, the city of Ottawa is lagging behind comparable mid-sized Canadian cities like Winnipeg, Edmonton and Calgary in terms of the number of immigrants it attracts. According to 2012 statistics, Ottawa attracted roughly 12,000 immigrants, compared to Calgary’s 29,898.  The lower immigrant settlement in Ottawa can be because of a number of factors. A report by the City of Ottawa identifies the need for promoting Ottawa as a great place for immigrants to settle down. That report also points to immigrant underemployment in the National Capital Region as another factor that drives immigrants away. A study commissioned by the Ottawa Local Immigration Partnership (OLIP) finds “the lack of ability for most immigrants to obtain employment with the federal government is also a strong disincentive.”

Should Ottawa follow the examples of Calgary, Edmonton and Winnipeg and encourage more provincial nominees to settle here? Or are there other things that this city can do to promote more immigration? How do we become more welcoming to immigrants?

OLIP partners believe that successful attraction, retention and integration of immigrants will require a combination of proactive government policies, the commitment and collaboration of all institutions of our community, a shared awareness of the integration process and challenges, and welcoming attitudes by all residents (Ottawa Immigration Strategy, page 20).  Where are we at with all these?

Let’s see.  In the last four years, Ottawa has established its own custom immigration strategy.  The municipal government endorsed the Ottawa immigration strategy and created its own vision and roadmap called the Ottawa Municipal Immigration Strategy.  OLIP partners are engaged in the implementation of the Ottawa Immigration Strategy and there is a great momentum and progress, which if sustained, will for sure help make Ottawa a welcoming city. The city of Ottawa recently launched a new website to promote our city as an ideal home for immigrants. The portal, Immigration Ottawa, describes Ottawa as “diverse, welcoming and vibrant.”

Are we on the right track?  How welcoming is Ottawa to newcomers?  How is our traction on all four paths to making Ottawa welcoming: (1) proactive and responsive government policy; (2) engaged institutions in all sectors of our community; (3) shared awareness of the integration process and challenges; (4) welcoming attitudes by Ottawa residents?

We welcome your thoughts. Write to us your thoughts on what Ottawa can do to attract more immigrants at This email address is being protected from spambots. You need JavaScript enabled to view it..

We also invite you to participate in the WOW 2014 series of events which run starting on June 23rd and culminating in the Community Cup Soccer Tournament on June 28th. To learn more visit www.olip-plio.ca