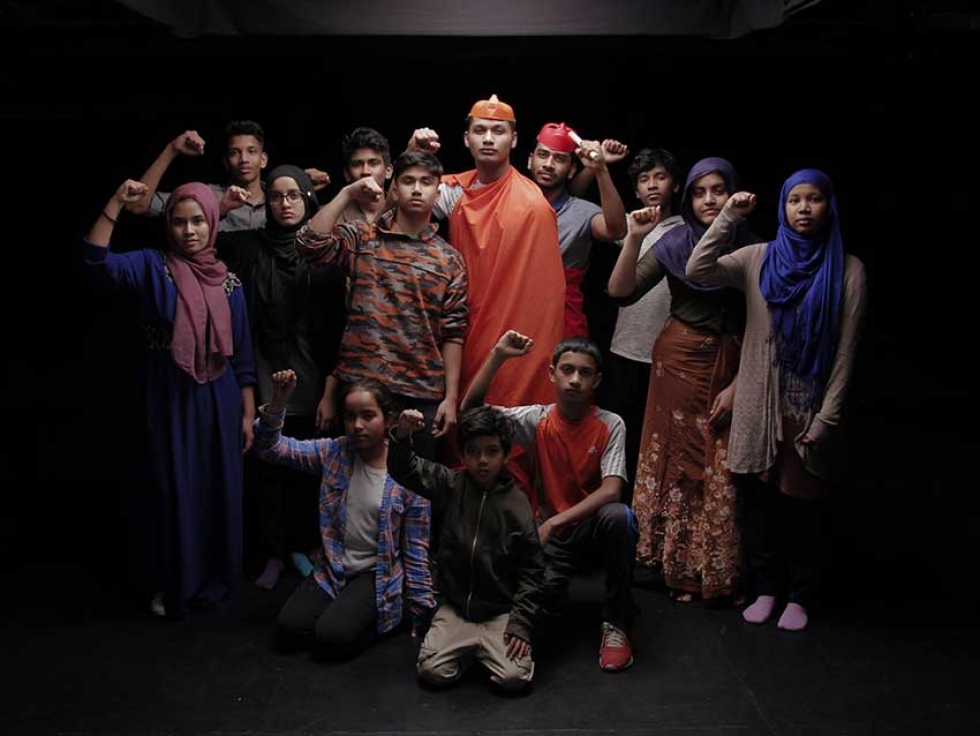 "I Am Rohingya" chronicles the making of the play "I Am Rohingya" by a group of Rohingya refugee youth living in Kitchener-Waterloo, Ontario.
30
Apr
2018

The documentary "I Am Rohingya" is coming to theatre in Ottawa (May 9), Toronto (May 11), and Waterloo (May 13). The team behind the film is partnering with local organizations in each city to host the screenings, such as Inter Pares in Ottawa, a non-governmental organization that has been working with human rights activists in Burma for decades.

Long before the crisis of Rohingya refugees fleeing to Bangladesh was making headlines, these youth wanted to find a way to tell the story of their people.

Funding to complete the documentary was raised through the Muslim-centred crowdfunding platform LaunchGood.com.

Muslim Link first interviewed Yusuf Zine in 2016 about the documentary during this crowdfunding campaign.

How did you become connected with youth from the Rohingya refugee community?

Yusuf Zine: I was working as an intern with Muslim Social Services Kitchener-Waterloo and I was assigned the task to organize some programs for the Rohingya youth. Instead of organizing some programming by myself, I decided to meet with them to see what they were interested in. When I did, the first thing they expressed was their desire to tell their story. They felt no one knew who Rohingyas were, and that bothered them. When one of them suggested doing a play, I thought that would be perfect since I have a background in it. And then we began to put the play together.

How/when did you realize that your experience and education as an actor could be used to empower the Rohingya refugee youth you were working with?

When they suggested doing a play, I knew that my background and education in theatre and acting would be a perfect fit. Teaching them acting skills has certainly had noticeable impacts to many of their personalities in coming out of their shells. But I don't like to think of it as I empowered them. They already had the power, they just needed a space and platform to express it. And that was essentially my job as director.

In most traditional theatre productions, you do what the director tells you. But this was much more of a collaborative creative process. There were moments where I had to step back as a director and let them take over. They know the stories, they lived through it. So I wanted to give the space to play and kept telling myself "it's their story to tell". And they took that opportunity and ran with it.

How did the idea of making a documentary about the making of the play come about?

Yusuf Zine: The idea for the documentary came pretty early on. I had feeling something powerful could come out of this project, and it might be worth documenting. If it falls through, then at least we tried. But if it becomes something, then this is a great and necessary story to tell. As time and rehearsals went on, my producer and I realized not only did we want to make this film - but we had to. There was only so much we could tell in a one hour stage play. The documentary is an extension of that play and in many ways a companion.

This is not just any film. This documentary represents a form of protest against those who seek to erase the Rohingyas and their culture from existence. The brave youth at the centre of the film view theatre and storytelling as a vehicle for keeping their heritage alive, and accordingly, this film stands as a symbol of hope and resilience.

In 2017, Muslim Link interviewed Rohingya Canadian activist Ahmed Ullah, who is one of the youth involved in creating the play "I Am Rohingya" and who is featured in the documentary.

Explain how you got involved with the “I Am Rohingya” Play

Ahmed Ullah: For me, I always had a dream to be an actor. Zainab is the coordinator for Muslim Social Services in Kitchener and she reached out to me and other Rohingya youth to do counselling about not doing drugs. The idea for the play grew out of our discussions. I really wanted to do a play.

All of us Rohingya youth knew each other from back home.

I think Muslim Social Services had about a $500 budget from the City of Kitchener as funding. So then I said let’s make a play about Rohingya people so people could know who my people are. Some of the kids didn’t believe in the idea at first but it was team work that made it successful.

After that we voted and the decision came together to work on the play. I never took acting classes or anything but it came naturally to me and I taught the kids how to do scenes and stuff. And you’ll see that when the documentary comes out. We just kept working. Yusuf Zine taught us a lot. It was not serious at first but then when there was a camera involved and there was a stage involved, then it all came to life.

The play is the greatest accomplishment we have ever done for our community in Kitchener.

Do you feel that doing the play has been more therapeutic than counselling?

Ahmed Ullah: When I’m on stage acting what my parents have lived, or telling the story of how my friends died back home, it’s like a nightmare for me. But still it shows me that I’m doing something good and that I’m using my time wisely and that one way ticket that I got to come to Canada, I’m using it wisely.

So you feel in some way, given all the problems you’ve had in Canada that at least you feel like this has made it worthwhile because now you can get your people’s story out. It’s a Rohingya telling the story now.

Yes. And we’re sick and tired of silence .We want to speak up. We want to heal our people through art. All the ignorance, we want to stop that. We want to be heard.

3 weeks from tonight we'll be screening our #documentary at @innistownhall in #Toronto. Curious about what to expect? Take a look back at our feature in the @TorontoStar for an introduction to our melding of #film, #theatre, & #activism: https://t.co/hmKIXlVjxc— I Am Rohingya (@IAmRohingya) April 20, 2018