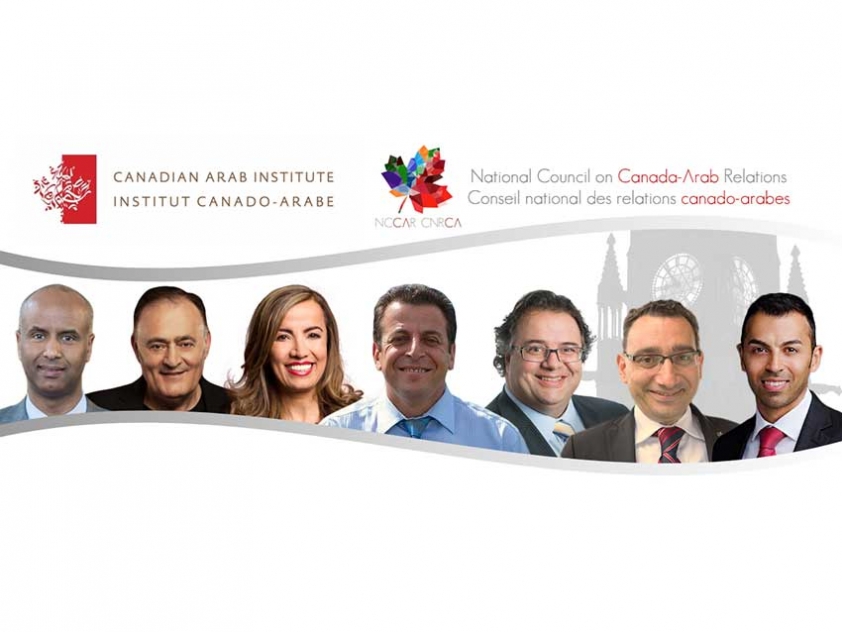 The National Council on Canada-Arab Relations (NCCAR) and the Canadian Arab Institute (CAI) are collaborating to host the Diversity in Parliament Reception on Wednesday, May 18th at the City of Ottawa. Attendees will have the opportunity to meet and engage with several of the current Arab Canadian Members of Parliament. Retired Senator Pierre De Bané, Canada’s first Arab Member of Parliament, will also be a guest of honour. Proceeds from the event will be going towards scholarships for Syrian newcomers and youth parliamentary internships.

Muslim Link, who is partnering with NCCAR and CAI to promote the event, interviewed the Chair of NCCAR, Gabriel Fahel, and the President of CAI, Raja Khouri, about why their organizations feel such an event is important for people to attend.

Why is the NCCAR and CAI working together to organize this event?

Raja: We saw this project as being particularly valuable to the community and it corresponds with a project we worked together on last year aimed at engaging Canadian Arab voters in the 2015 Federal Election. The goal there was to get people to vote but we also wanted to get people educated about the political system, the democratic process and the responsibilities of citizenship. It was a successful campaign. We also saw 22 Canadian Arabs run for election and 8 of them were elected. Those numbers are unprecedented; it was a landmark election for the community. So, this event is really a celebration of these achievements. It’s a celebration of our community coming of age in terms of political participation.

Gabriel: Civic engagement doesn’t stop end with voting. This is an opportunity for members of the community to engage with their elected officials. Let them hear your concerns.  Retired Senator Pierre De Bane was the first Arab elected to Parliament in 1968 and more half a century later,  there are now eight Canadian Arab Members of Parliament. We can see a maturation of the Canadian Arab community in terms of civic engagement. The reason why we are engaging these particular Members of Parliament is that are positive  parliamentary role models for the youth and newcomers from the Arab community. It is also an opportunity for the community to engage with the Mayor, community leaders and more than 40 MPs and Senators

What are some of the challenges with engaging the Arab community? There is so much diversity within communities in Canada that are identified as “Arab” in terms of politics, nationality, religion, ethno-cultural background, and generations in Canada. How have your organizations strived to be inclusive of this diversity?

Raja: It’s really not one community, it’s many communities. The way the Canadian Arab Institute is able to be inclusive of everyone is by being secular, by not getting into the business of Middle East conflicts, and by being Canadian. Our Canadian-ness is our best common denominator. Our message is really directed to those within the Arab communities who see themselves as Canadian and who are concerned about what is happening in our country, in our society, and in our community.

Gabriel: From NCCAR’s perspective, all members are welcome within our organization; it’s not specific to someone being Arab Canadian. The organization is for anyone who is interested in Canada’s relationship with the Arab World. But you are right, you will encounter many different voices and perspectives within specific communities. What I find very helpful and what NCCAR uses as a guidepost is the Canadian Charter of Rights and Freedoms and international law, particularly international humanitarian law. So when there is a conflict, such as different perspectives on Syria or different perspectives on the conflict between Saudi Arabia and Yemen, the driving force for our organization is the Charter and international law. We can build consensus around those values.

To purchase a ticket to the Diversity in Parliament Reception click here.