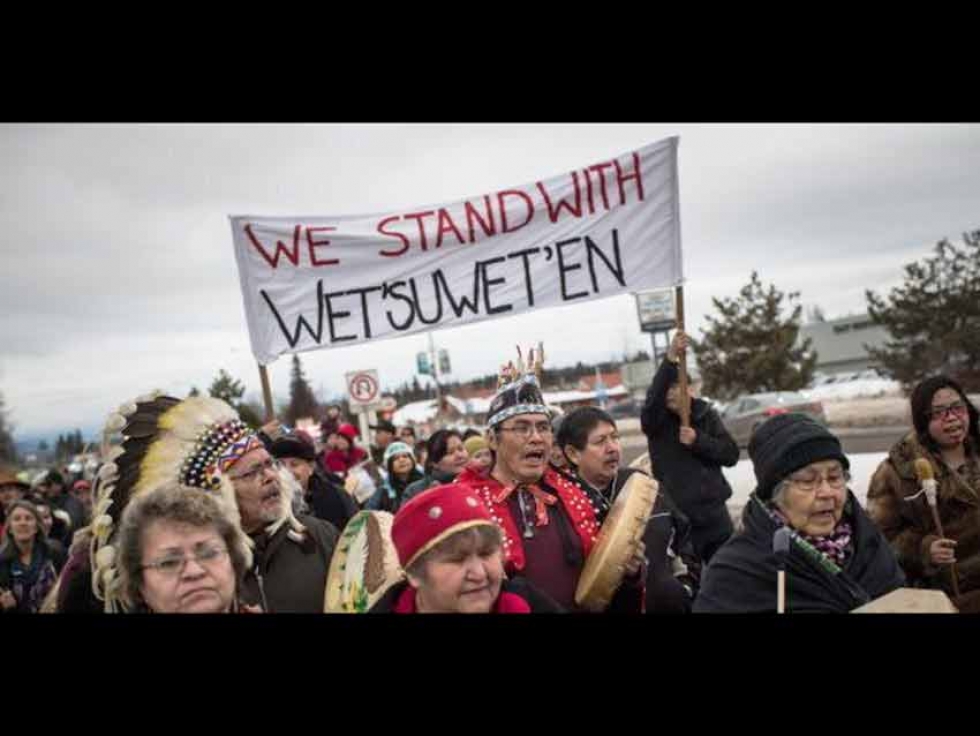 Hereditary Chief Ronnie West, centre, from the Lake Babine First Nation, sings and beats a drum during a solidarity march after Indigenous nations and supporters gathered for a meeting to show support for the Wet'suwet'en Nation, in Smithers, B.C., on Jan. 16, 2019. THE CANADIAN PRESS/DARRYL DYCK via Huffington Post
26
February
2020

Muslim Family Services of Ottawa (MFSO) has launched the following letter campaign open to Muslims in Canada who wish to show solidarity with the Wet’suwet’en Nation and Indigenous communities in Canada.

We, the undersigned members of the Muslim community, wish to express our solidarity and support for the Hereditary Chiefs of the Wet’suwet’en Nation and the Indigenous nations across the continent who are supporting them.

We urge the federal and BC governments, the RCMP, and the Coastal GasLink Pipeline Project to respect Wet’suwet’en jurisdiction over their lands and water and to honour the United Nations Declaration on the Rights of Indigenous People[s], the Supreme Court’s Delgamuukw-Gisday’wa decision (1997), and the Truth and Reconciliation Commission’s Calls to Action. We understand that the Wet’suwet’en may have even attempted to offer alternate routes that reduce the tragic destruction of sacred, historic, or ecologically sensitive sites.

Many members of our community came to Canada as a result of occupation, colonialism, and injustice elsewhere. We recognize that many of us are also settlers on this land and must continue to interrogate our own actions and address the ways in which we may contribute to harming Indigenous communities. The Quran, the holy book of Islam, calls on us to “stand out firmly for justice, as witnesses to God, even as against yourselves, or your parents, or your kin, and whether it be against rich or poor” (4:135). It is imperative that just as we speak out about injustice abroad, so too do we speak out when injustice takes place close to home, and at the hand of our own government. We urge the federal and BC governments to cease arrests and incursions in Wet’suwet’en territory and elsewhere where Indigenous people are taking a stand.

Indigenous communities are urging humanity to change our relationship with the earth on which we live. We have heard Indigenous voices remind us that water is life. Our sacred book reminds us that the Divine “has sent down rain from the sky and given life thereby to the earth” (16:65). Without clean water and an intact ecosystem, the health and future of our children and grandchildren are at risk.

It is vitally important that we add our voices to the thousands who are calling for justice and respect for all five clans of the Wet’suwet’en Nation who have unanimously opposed pipeline construction in their territory. As members of the Muslim community in Canada, we express our support for, and solidarity with, the Wet’suwet’en nation. We call on our elected officials to pursue a path of justice, dignity, and responsibility.