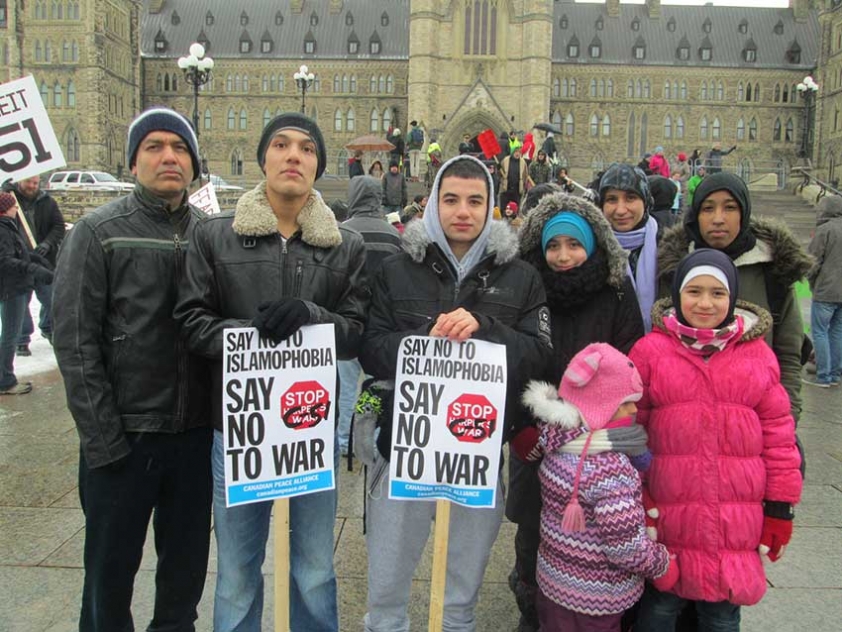 On March 14th, thousands of Canadians gathered across the country in over 70 communities to show their outrage over the Conservative government’s proposed Anti-Terrorism Act, Bill C-51. Everyone from Canada’s Privacy Commissioner, to NDP Party Leader Tom Mulcair and Green Party Leader Elizabeth May, to former Prime Ministers Paul Martin, Jean Chretien , and Joe Clark, have spoken out against this Bill, stating that it will needlessly infringe on the civil liberties of Canadians and also will probably not increase national security. Despite this, the Conservative and Liberal Parties have stated that they will vote in favour of the Bill.

Tunisian Canadian Monia Mazigh, whose campaign to bring back her husband Maher Arar after he was rendered to Syria under Canada’s current Anti-Terrorism Act (2001), was one of several speakers at Ottawa’s Stop Bill C-51 demonstration. Other speakers included environmentalists and First Nations rights activists, all of whom feel targeted by the wording of the current bill, which includes broad definitions of what constitutes “promoting terrorism”, increased powers for CSIS, and increased powers for preventative arrests.

In her speech, Mazigh stated “We are gathered here today to stop Canada from becoming a police state where everyone is afraid of everyone, where everyone is suspicious of everyone. The new powers that will be given to CSIS will not make us more secure. They are just an illusion. The new powers granted to CSIS are going to allow the government to collect more personal data about us. Data they can use against us at any moment. Data they can share with other spying agencies….If we participate in a march of solidarity with Palestinians, we might be branded terrorists. If we write a Facebook posting where we criticize the oil pipeline across Canada, our name can be flagged and we can receive CSIS officers in front of our door. If we are First Nations peoples and we would like to stop big corporations from coming and exploiting the natural resources on our land, we might be considered a threat to the country….This is not an exaggeration…the scope of Bill C-51 is so broad, the definition of national security is so vague, that all actions of dissent or criticism of this government could be interpreted as threating the security of Canada…”

Zakaria Gilani-Mian, 16, is a third generation Pakistani Canadian. He came to the demonstration with his father and his younger brother. “Everyone that is here today is fighting for the same cause and showing true solidarity,” Gilani-Mian explained, “As a Muslim, I’m concerned about how Islamophobia has played a role in crafting this bill but really this Bill affects all of us, not just Muslims. I’m not here fighting for Muslims just because I’m Muslim and know that I can be a target of this Bill but really I’m fighting for Canadians.  The indigenous people of Canada are really going to be affected by this too.”

Gilani-Mian’s father, Tony Mian, a second generation Pakistani Canadian, felt it was important for him to bring his sons to the demonstration and it is something he things other Muslim parents should do.  “I don’t want them to live in some sort of bubble,” he explained, “We know what is going on in the world, the rest of the world if falling apart, literally. I want them to understand what is going on and if they are involved they will understand. That’s how understanding will occur, you have to get involved.”

Mian hopes that by coming out to demonstrations like this he can help to preserve the Canada that his parents brought him to as a child in the 1970s. “We used to wear our flag proudly around the world; we still want to do that,” he explained, “The idea of being a Canadian is to speak freely and to keep peace. And this bill is definitely putting us in a position where we are becoming an oppressive society. It’s like it’s turning into a dictatorship. It’s really gotten out of hand. We want to fight for our freedom peacefully, which is the Canadian way.”

Sudanese Canadian university student Roua Alijed, 18, came out to the protest to stand up for her rights and the rights of other Canadians who she feels are targeted by this Bill. “The Bill attacks me personally along with a lot of the Canadian community,” she stated, “As a Canadian, I felt like I needed to do something so I’m here. We are Muslims, but we are also Canadian citizens and we share this country with the First Nations and with everyone else who is going to be affected by this Bill whether it is Quebec citizens or Queer citizens, this is their country as much as it is our country so we have to fight for their rights, because no one is free until everyone is free.”

Somali Canadian Sadia Jama was disappointed with the visibly low turnout of Muslims in Ottawa and across the country and the fact that local and national Muslim organizations did not officially urge their members to attend these protests. "Two very involved Facebook friends of mine in Saskatoon and Edmonton are also feeling let down at the numbers of Muslims that showed up to the protests in their respective cities," Jama stated. She feels that it is crucial that Muslim Canadians be visible and understand the impact of mass protests on public opinion. "A mass protest is essential to killing the Bill because it sends a message that Canadians from all walks of life are against draconian measures and fear mongering," she explained, "Public rejection of the Bill will also give civil liberties groups the backing they need in their closed door efforts to repeal the Bill.”

Somali Canadian Amran Ali expected there to be a low turnout of Muslims, although she had hoped to be surprised. “The question is did you know about?” she explained, “If you knew about it, why didn’t you feel the need to come out? Were you afraid? I think it is more likely ignorance and not being plugged into what is going on. I found out about the event thorough a group called Leadnow.ca which regularly sends updates about the Canadian political situation. They did a great job explaining the Bill in layman’s terms. But I don’t know how many Muslims are on that email list or similar emails lists. I personally sent it to a whole bunch of Muslims I know, but none of them showed up.”

Ali knows that Muslims tend to protest in large numbers on issues like Palestine or wars in the Middle East. “The vast majority of Muslims are aware of an issue like Palestine or different wars, so they will come out and protest as many people in our community have a direct connection to those “hot spot” regions,” she explained, “So they follow that news closely, especially the older generation.  So, it’s personal, it’s not as abstract as saying you need to go out and protest to protect your civil liberties.” She hopes that with more public education in the community more Muslims will get involved, considering that their rights to protest in solidarity with Palestinians or against an invasion of a Middle Eastern country are actually at stake if this Bill becomes law.

For Zakaria Gilani-Mian, he feels that the key is for those who oppose Bill C-51 to vote against parties who are supporting the Bill. “I’m 16 so I can’t vote but everyone who can vote, vote for our rights as Canadians!” he stated. Roua Alijed agrees. “We have the power to change things so we have to vote,” she explained, “We keep getting parties that we don’t agree with because no one goes out and votes! There is such a low voter turnout rate. There are so many young people who are complaining about the government but they are not going out and voting and if you are not voting, it doesn’t mean anything. But you have to make an informed decision, you can’t just jump on the bandwagon and be like ‘Well the Liberals seem like they are acknowledging me as a Muslim so I’m going to go vote for them.’ You need to know what you are voting for, you need to ask what their platform is? You have to make demands of these people before and after they get elected as well. You can’t just vote for them and leave. We have to keep fighting for what we want even after the election.”