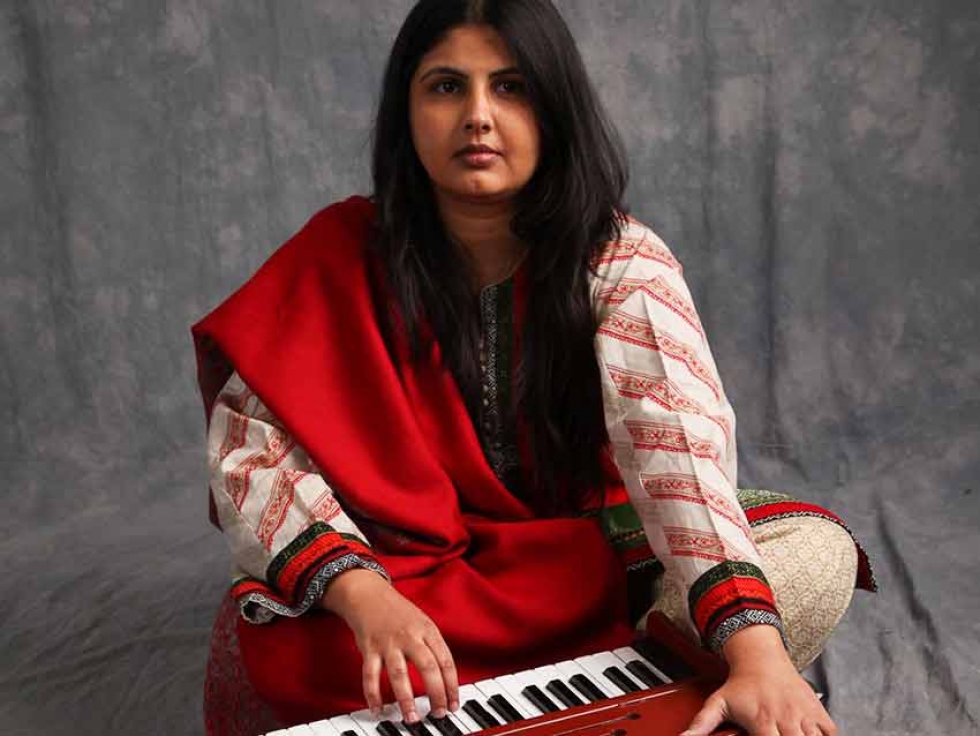 Shumaila Hemani (PhD), is an Ethnomusicologist, specializing in the poetry and music of Muslim South Asia Shumaila Hemani
09
Jul
2020

As a Sufi singer, I believe the sounds of world religions can cultivate compassion during COVID-19

The global COVID-19 pandemic has taken us into an era of social distancing. By relying on online digital media, we may be isolating ourselves from more local and diverse communities.

As an ethnomusicologist at the University of Alberta, my research and musical practices lead me to reflect on how what I think of as a “socially isolated ear” is more prone to resist and be intimidated by cultural and religious diversity. As a Sufi vocalist, through my music I share the message of love and interfaith harmony taught by Sufi mystics — and I explore the crevices of Muslim belief and expression from a feminist standpoint.

Sufism is the mystical branch of Islam that is based on introspection and spiritual practices for cleansing the heart to receive closeness with Allah. Sufis have used the power of art, music, poetry and dance to show human soul’s relationship with the Divine.

How intercultural listening transforms us as humans became ever clearer to me this past spring as I watched students grow in understanding in courses I taught.

I contrasted this with the racism and intolerance demonstrated by some to the public sounding of the Muslim call to prayer (azan) in Mississauga, Ont. and in Edmonton.

Ritual is a powerful gift that brings a sense of a collective and been a source for social cohesion within societies, instilling support and resiliency or creating new social bonds, as the French sociologist Emile Durkheim points out. For those in religious communities, ritual is about human interaction with the Divine.

The idea of ethnomusicology as the anthropology of music was first proposed in the 1960s by anthropologist Alan Merriam. He emphasized the need to study not just sound, but also the cultures that shape and are constituted by how people listen and make music. What has become increasingly important in the ethnographic study of music is to engage with “communities of sounds” and voices of people within cultural and faith communities.

A semester at sea

Earlier this year, I taught ethnomusicology courses during a Semester at Sea, a study-abroad program that takes place on a cruise ship and in the global ports visited. My students and I discussed the sounds of rituals of the ports that we travelled to as well as soundscapes of political and sacred rituals in people’s everyday lives.

My students wrote about interacting with hula dancers in Honolulu; Buddhist and folk rituals in Vietnam; Hindu, Christian, Muslim and Daoist worship in St. Port Louis, Mauritius; and the sounds of Buddhist chants and Shinto worship in Kobe, Japan.

Some of these students gained deeper appreciation into the diversity and beauty of aural faith practices. They were learning intercultural listening — to listen not just to the sound of music of another culture and understand how it is rhythmically and melodically arranged, but also what makes it meaningful for the people within their respective history and context. As I watched my students, I saw that the classroom was enhancing their cultural immersion and giving them tools to understand the sounds of ritual practices they encountered.

After the Japan tour, one student said that when she went with her friend to a Shinto temple, her friend wondered why the attendees clapped their hands as part of their worship. Within our class discussions prior to reaching the Kobe port, the student had learned that Shinto believers clap twice to invoke kami (the spirits) for healing. When she could explain that to her friend, it was an “aha” moment for her that this course contributed to her learning.

Such student insights suggested to me that people can learn to appreciate the sounds of ritual as poetic for the human ear if one begins to understand the meanings that practitioners are invoking.

On our voyage, I disrupted existing stereotypes about Muslim belief and practice by challenging the understanding that there is a singular “true” or homogeneous expression of Islam — an idea amplified by western myth and Islamophobia.

As part of the field program about historical and spiritual sites in Mauritius, I informed the participants about the five pillars of Islam, while sharing the diversity in its interpretation across Muslim communities.

We examined practices such as the Mevlevi ayin, the ritual of dervishes within the Mevlevi Sufi brotherhood that consists of whirling to the poetry of Rumi in Turkey and Sufi qawwali in South Asia. Qawwali is one of the foremost styles of singing Sufi poetry in South Asia, made world-famous by Pakistan’s Nusrat Fateh Ali Khan.

I drew on research about the sounds of Islam, the lived realities of Muslims through exploration of the Sufi music and my own research about Shah Abdul Latif Bhitai, an 18th-century Sufi mystic and poet in the Sindh region of pre-colonial India. Bhitai’s poetry reflects the distinct character of Sufi poetry in South Asia, and centres around romantic folk tales. These relate messages about cultivating Divine love, with the protagonists of the tale being mainly women.

Learning to listen in new ways

Since the 1990s, there has been a movement within anthropology to emphasize the senses to gain a deeper appreciation of “hearing cultures.” I contribute to these discussions by introducing the concept of an “intercultural ear” as an important tool for countering rising racism and xenophobia in the pandemic. In order to save humanity through this global pandemic and to build our social resiliency, we need a greater intercultural awakening through listening.

The recent pushback over the bylaw accommodations to allow Muslims to sound their call to prayer during Ramadan are a case in point.

This was after in-person religious gatherings, as all public gatherings, were temporarily suspended as a result of COVID-19. In some cases, Islamophobic and hate commentary erupted.

In this context, paying more attention to and preserving sonic markers of diverse faith groups is necessary so that people are exposed to intercultural sounds from their homes.

When the ear has access to lived sounds of ritual, including the call to prayer, and when vision is supported by engaged listening, it is likely to expand one’s horizon of understanding. Intercultural listening cultivates our compassion and humanity during a crisis.

Shumaila Hemani (PhD), is an Ethnomusicologist, specializing in the poetry and music of Muslim South Asia. She currently teaches at the University of Alberta in the Faculty of Extension's Department of Communications and Design and has taught courses in the Music Department, University of Alberta, and Semester at Sea’s (SAS) Spring 2020 voyage.

Her research about the sung poetry of the Islamic mystic Shah Abdul Latif Bhitai and associated hereditary communities of singers in the Sindh region of Pakistan has received several honors and awards including First Prize for her conference paper at the Society for Ethnomusicology Conference (2017), Laura Bassi Dissertation Fellowship (2018), Frank Henderson Award in the study of Women and Religion (2016), State of Kuwait Award in Islamic Studies (2015) to name a few. She has published in the Encyclopedia of Women and Islamic Cultures (Brill) and has an upcoming chapter in Music and Social Justice (The Indiana University Press).

Shumaila is also a Sufi singer-songwriter who brings to diverse listeners around the world new musical interpretations to the traditional repertoire learned from master musicians in Pakistan. Her upcoming album Mannat (A prayer, A Wish) presents poems learned from two master musicians in Pakistan. Based around the concept of supplication and saint worship that are practices are braced by many religious cultures, yet still resisted by mainstream orthodoxies who deem them as superstitious and illegitimate, her musical poetry works to decolonize intercultural conversations by resisting cultural essentialism and offers prayers for the health and wellness of the world.