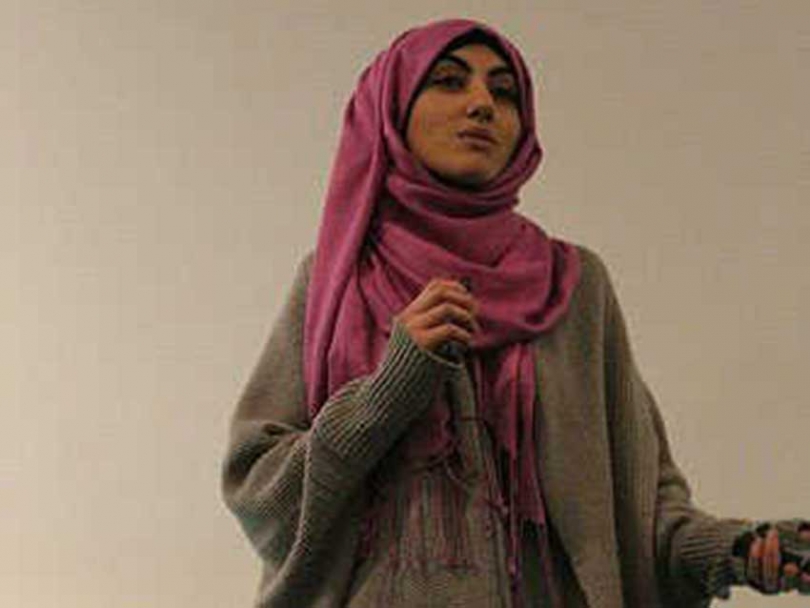 Haneen Alhassoun recently won second place this month at the Ottawa Youth Poetry Slam. At 16, the Brookfield High School student is both humbled and excited about her win as she has been working towards it for the past two and a half years.

She first became involved in spoken word poetry when poets Greg “Ritalin” Frankson and Beth Ann-Fisher ran a two-day workshop at Fielding Drive Public School.  They were impressed by her work and introduced her to the Ottawa Youth Poetry Slam, which provides a space for children and youth interested in spoken word to hone their writing and performance skills.

Haneen, a Palestinian-Canadian who wears hijab, has found Ottawa's spoken word scene to be incredibly welcoming and accepting of Muslims. Haneen has performed across the city and lent her talents as a performer at various fundraisers. She hopes to record a poetry/rap mix-tape in collaboration with other local Muslim artists.

Is for the boy who always dreamed to be a thug

For the one who lives in a home

But claims his home is the streets

For the one who chops green

And HTC replaced the ABCs on his triangles

And I missed him in math class

When my thoughts were slightly off the graph

Because he was outside hustling cash

Trying to get girls' attention with his swagger

As if he's a subject and green is the dictator

This is for the boy who walks with that thuggish limb

Can't get any girl but still calls himself a pimp

This is for you

For your red puffy eyes, your pale yellow skin and the green in your pocket like you're a traffic light

But fail to see the light of God outshining your sins

That means drunk in the afternoon

Not trying to drink down your misery or heal a wound

But simply paint one

Don't get me wrong, but you're the one who told me stay strong

Maybe if I collect the ashes

Transform them back into a thin good looking bullet

Reenact your life with the smoke

You'll wake up to reality

Is for you too boys

You're the ones I used to see in that Uplands corner

And I used to walk by you like you're criminals

But I realized that life and poverty are the criminals

They're the ones who stole your innocence

And buried your sorrows in a Smirnoff bottle

But still hold a killer in your palms

So you pull her closer

But I promise you

The struggle is almost over

Because the love for your dreams is almost stronger

To show them that hip hop is the real medicine

You're the ones who dunk that basketball like you're kangaroos

Jumping so damn high hoping to fly out of this zoo

I've always wanted to stop and talk to one of you

But each one of you has faced charges

They charged you for trying to live better

But here's something better

Dear "wanna be" kid and the boys of Uplands

You all believe in God,

So it's time to pull your hands out

Of your pockets and pray for him

Hold rosary beads in your hands instead of bra straps

Hold a holy book in instead of blunt papers

And I hope to see you all in heaven