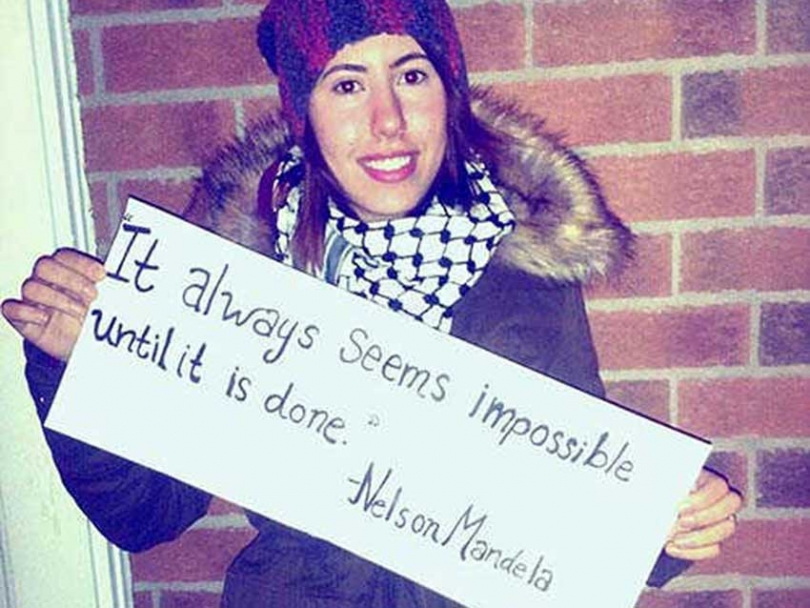 When news of Nelson Mandela passing spread, the world was shaken. From the people of South Africa who felt the direct impact of his actions, to those who benefited from his AIDS campaign; everyone was saddened.

For me, Mandela's death really hit home. As a Palestinian, I looked up to Mandela. I remember one night, years ago, doing a google search to find out who he was. I quickly learned that he was an anti-apartheid advocate and a hero to the South Africans. I soon stumbled on one of his quotes that I would never forget: “We know too well that our freedom is incomplete without the freedom of the Palestinians.”

Being around 13 at the time, my thought was, “Wow, he saved South Africa, maybe he can save Palestine too!” ”“ NaÃ¯ve, right? By maybe it isn't so far-fetched. After all, Mandela had a far-reaching impact on the Palestinian community, and a considerable influence world-wide.

He was seen as a symbol of hope for the Palestinians, and when he passed away, it's as if the light of hope had dimmed. His impact was so significant that the current Palestinian president, Mahmoud Abbas deemed him to be a symbol of freedom from the Israeli occupation. I believe, if the world were to use the same set of ethics and principles of justice as Mandela, not only would the world be free of disparities, but Palestine would be free.

The death of Mandela affected more than just the Palestinian community; it also touched the Muslim community. He shared many of the same ideologies that Muslims share, and therefore we sympathized with him. One of the biggest struggles that Mandela faced, and that the Muslim community continues to face today, is racism. The truth of the matter is that discrimination occurs both outside of and within our community.

A prevalent issue in Muslim communities is that people are singled out on the basis of skin colour. As a young child living in Gaza, I grew up and played with such a diverse range of people of different colours. It seemed pretty normal to me. It was only when I grew up and moved to the West that I began to experience the harsher side of reality and notice that there was in fact discrimination against people based on skin colour. It was only when I grew up that I realized that racism is not inherent, rather it is learned. Mandela highlighted this fact in his autobiography, Long Walk to Freedom when he wrote: “No one is born hating another person because of the colour of his skin, or his background, or his religion. People must learn to hate, and if they can learn to hate, they can be taught to love”. This is something we can learn from.

It is important to address the racism that occurs within the Muslim community and it must end. A recent case is of racism against black African migrants in Libya.  What started off as acts of discrimination, manifested into violent attacks and these are the types of acts that can turn into civil wars.

So how can we implement this to our current situation and end racism? The answer is simple: eliminate arrogance within one's heart and realize no human is better than the other. Arrogance is one of the most dangerous attributes. It is so dangerous the Prophet (pbuh) said, “One will not enter Paradise if one has an atom's weight of arrogance in his or her heart.”

From this we learn it is important to teach our children to be humble, and accepting, just like the teachings of the Prophet (pbuh). Ending racism starts at home, because children are not born to hate, they are taught to hate.

Just like Mandela says, “It always seems impossible until it's done.”