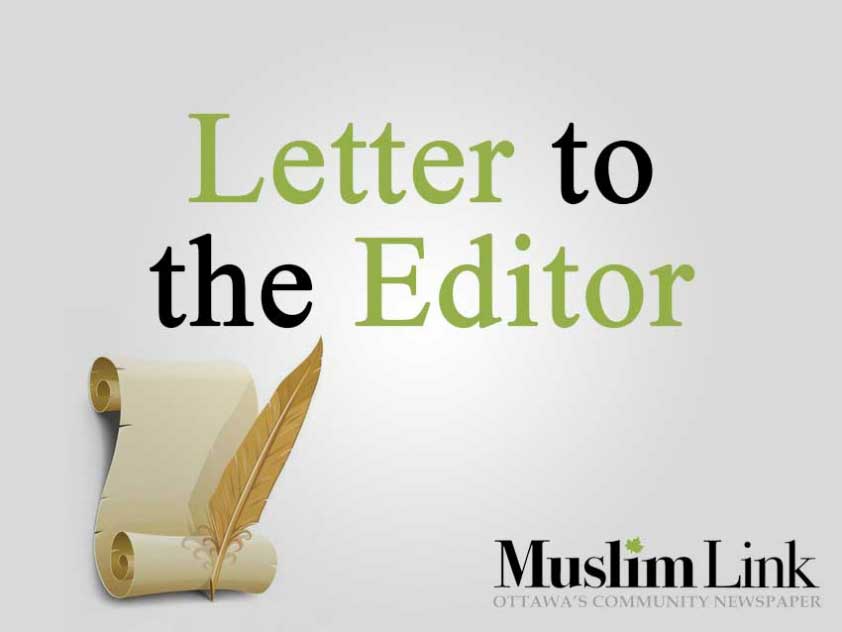 It was so upsetting to read the recent article in the Muslim Link, "The Do's and Don'ts of Bringing Your Kids to the Mosque". I did appreciate the practical advice such as not bringing messy snacks and loud toys; however I felt it mainly encouraged parents to leave their young children at home and even went so far as to say parents who bring their children to the Mosque as being selfish and disturbing other worshippers. What this opinion based article failed to do was to look into what Islam teaches about this very important subject. It also failed to consider widowed and single parents, etc. Instead is took the wide spreading attitude that the Mosque is not a place for children. This is concerning and something often discussed in the community by fellow mothers and parents alike.

As a former Christian I can honestly say that I would never expect to be asked by a fellow Christian or Church-goer to leave my young children at home. I urge Muslims to go see for themselves, to visit a full Church on a Sunday and they may be surprised to see that it is filled with young children and babies. I can remember as a very young girl going to Church and learning about God and the Prophets. I can even remember babies crying from time to time, this is natural! What does the Prophet Mohammad (PBUH) say one should do when we hear a baby crying in the Mosque? The Prophet (PBUH) said: "When I stand for prayer, I intend to prolong it, but on hearing the cries of a child, I cut it short, as I dislike to trouble the child's mother." (Reported by Bukhari) Instead of accusing parents of being selfish and disturbing others worship they should show some mercy to these children and their mothers. Unfortunately, I, like many other mothers, have had the unfortunate experiences of having to leave the Mosque after people have given dirty looks, made rude noises and comments or have been directly confrontational, all for simply visiting the Mosque. This past Ramadan, my son giggled and was reprimanded! He was told he had no respect for the Mosque. As a 4 year old I don't see how laughing is a form of disrespect and the woman's reprimand was a far greater distraction then his giggle. What is really upsetting is that many Muslims treat the Mosque as their own personal living room. The Mosque is the House of Allah, the Most Merciful. We also know that the Prophets' wives would visit the Mosque, no evidence was provided in the article that they took turns with their husbands or had babysitters?

Please, let us look at what our own religion teaches about children at the Mosque. Here is just one of many hadeeth (authentic narrations) which show the early presence of young children playing at the Mosque. "During the prayer, the Prophet (PBUH) performed a very long prostration, so I raised my head and there was the child, on the back of the Messenger of Allah (PBUH), who was in prostration. I then returned to my prostration. When the Messenger of Allah (PBUH) had offered the prayer, the people said: 'O Messenger of Allah! In the middle of your prayer, you performed prostration and lengthened it so much that we thought either something had happened or that you were receiving revelation!' He said: 'Neither was the case. Actually, my son made me his mount, and I did not want to hurry him until he had satisfied his wish.'" (Reported by Nasaa'i, Ibn Asaakir, and Haakim) Are we more deserving than the Prophet (PBUH) of a silent, serene, child free Mosque visit?

When people are going to a communal place of worship, they should remember just that, it's communal! As Muslims we should not strive to make others feel unwelcome in the Mosque. If kushu (concentration) is an issue for someone than that is something they have to work on. Our kushu is our own responsibility, we cannot blame others for losing our focus in prayer and there are many articles devoted to providing tips for maintaining concentration in prayer. If someone's kushu is broken so easily, then maybe it would be better for them to stay home in the peace and quiet of their own home. As a parent I don't feel a child laughing or playing among each other disturbs the peace. The Mosque is and should remain a place for families, those with and without children, young and old. Of course parents need to teach their children to lower their voices and to not get overly excited, however others (especially those without children) need to realize that children are constantly learning and cannot be expected to be like robots or immobile, silent fixtures. Let us remember children are also learning how people act and treat them at the Mosque. If someone facilitates a child's attachment to the Mosque, they share in the reward of their future good deeds. I would not want to be in the shoes of those who prevent children from becoming attached to the Mosque and may be part of the cause of them refusing to go when they become older. It is very unrealistic to tell young children the Mosque is not a place for them and to make them feel unwelcomed then expect them to want to go once they hit a certain age. Fundraising activities for Mosques may also be dampened if families are made to feel that they and their children are unwelcome. Arguably some Mosques in Ottawa are worse than others when it comes to being unwelcoming to children.

Finally this article fails to admonish those who treat children harshly at the Mosque. Some children have been hit, had their things taken and blankly been told to leave. A final question: What's next? We need not look too far at other countries that are presently preventing women from going to the Mosques. Both of these exclusive efforts may be with the best of intentions but are not grounded in the Islamic faith and in fact contradict it.