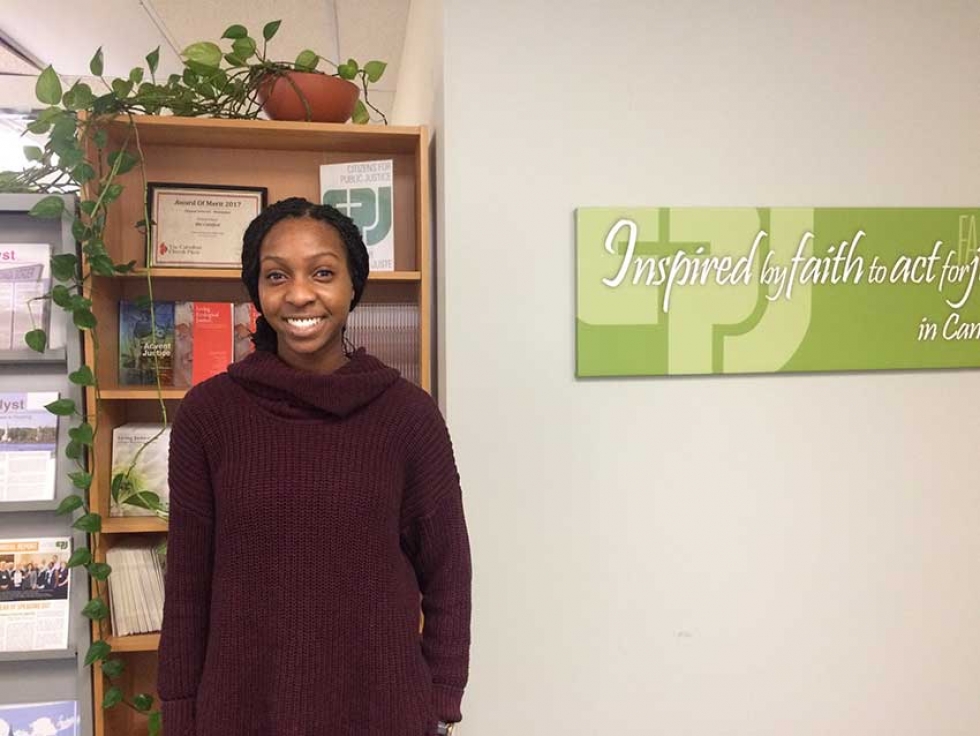 Some Christians are in a state of denial, but the fact is, Jesus (pbuh)* was a refugee. He also wasn’t blonde and blue eyed, but that’s a battle for another time.

According to the Biblical account, shortly after his birth, Mary and Joseph sought safety in Egypt. They’d been targeted by the insecure King Herod who had it out to kill anyone who could potentially thwart his power. They needed sanctuary. They were fleeing persecution.

The Christian faith revolves around a young, Middle Eastern asylum-seeker who faced rejection and displacement from His earliest days. The face of Christianity’s central figure looks not unlike those that some in the faith would close their doors to today.

I’m currently the refugee rights intern at CPJ. Along with this cause, we tackle the issues of poverty and ecological justice in Canada.

Founded in 1963, CPJ is a national organization made up of members from an array of Christian churches. I’m a Nigerian Evangelical. Our founders were Dutch Calvinists. Our barriers and divisions crumble under the surpassing call to love our neighbours.

But first, let me back up a bit.

About two and a half years ago, I unknowingly plunged into a humanitarian crisis.

Though I’d been skeptical of oversees volunteer work for some time, a psychologist from a church I’d been attending had an NGO in Rwanda, where she and a team of locals worked to provide post-genocidal supports for many marginalized people in society. She’d invited a team of university students to support some of their long-term projects, fundraise to provide needed resources for the local community, and offer their unique skillsets in the field.
Despite my reservations, I couldn’t shake the desire to go, so I said yes.

And when my team arrived, on May 5, 2015, the neighbouring nation of Burundi was in a state of disarray.

Just two weeks prior, the Burundian President Pierre Nkurunziza had announced that he would be running for a third term, against Burundi’s two-term limit, outlined in their 2005 Constitution and the regulations of the Arusha Accord. Protests ensued, followed by a shady trend of civilian arrests, disappearances, and deaths. Burundian refugees began fleeing by the hundreds daily.

Humanitarian agencies quickly moved in to set up temporary camps. After contacting the UNHCR head in the country, we scrapped our original plans and decided to support their efforts however we could.

Before I knew it, I found myself in a crowded, underserved refugee camp with seven other wide-eyed Canadians among a sea of more than 5,000 women and children whose lives had taken a sharp turn. In those moments, I knew my life had done the same.

There’s a Christian theological term known as imago dei, which posits that all people are created in the image of God. Every individual, we believe, uniquely reflects who God is. Black or white. Young or old. Muslim or Atheist. All people carry His likeness and are worthy of dignity and care.

And yet, while nearly 400,000 Burundian refugees have fled since April 2015, most people outside the continent have never heard about the crisis, or even the country for that matter.
In our Western comforts, we have the privilege of being apathic.

But, as a person of faith, even if the rest of the world turns a blind eye, that option isn’t on the table.

Jesus (pbuh) was a refugee, and he laid the foundation for Christianity as that of love and justice for our neighbours: “Love the Lord your God with all your heart and with all your soul and with all your mind.’ This is the first and greatest commandment. And the second is like it: ‘Love your neighbor as yourself.’” (Matthew 22:37-39)

When I began my work at CPJ, this concept came to life. CPJ’s mission is to promote public justice in Canada by engaging in key public policy debates through research and analysis, publishing, and dialogue. By shedding light on issues of injustice and inequality, we encourage citizens, leaders in society, and governments to support practices that align with God’s call for love, justice, and the flourishing of Creation.

So when it comes to refugees, we not only affirm the right of each individual to migrate and to seek safety, but we also call on all Canadians, especially those within our own faith community, to welcome every individual with open arms.

This isn’t an option – it’s what Jesus’ example should compel us to do.

And beyond this welcome, we recognize the necessity of just laws to see justice realized. We call on the government to speak out against atrocities and take measures to protect vulnerable people both domestically and abroad. This means zero tolerance for bigotry or xenophobia.

As individual citizens, we realize our responsibility to participate in the public sphere, combat racism and prejudice, and encourage our governments to adopt just policies. Our rhetoric of welcome must be coupled with action to see systemic reforms. Each of us must play a role in creating a more kind and inclusive Canada.

This, we understand, is how Jesus (pbuh) lived his life. He engaged with those who were overlooked. He spoke out against those with power on behalf of those without it. He modeled resistance for the sake of the most vulnerable in society. He stood up against injustice and bent low to welcome the stranger, refugee and all.

Editor's Note: *Muslims say "peace be upon him or her" after the name of Prophets and important figures in the history of our religious tradition. Jesus (pbuh) or Issa (pbuh) as Muslims and Arabic speakers refer to him, is a Prophet in our tradition.

Deborah Mebude’s interest in refugee rights was first ignited when she volunteered at a Burundian refugee camp in Gashora, Rwanda in May 2015. Her face-to-face encounter with displaced, marginalized people, the majority of whom were children, stirred within her a strong desire to see justice done. When continued tension began to drive an escalating number of Syrian refugees from their homes that same year, she knew that more needed to be done, particularly in Canada, to ensure that all displaced people could find safety in a timely and efficient manner.

As a recent communications and journalism graduate, Deb combines her passions for thorough research and engaging dialogue with a vision of gospel-centred advocacy and compassion. Inspired by the words of Dr. Cornel West, she truly believes that “justice is what love looks like in public”; Deb couldn’t imagine spending her life doing anything else, and is humbled by the opportunity to learn to walk this out more and more alongside the experienced Citizens for Public Justice team.

When she isn’t working, Deb enjoys reading all things C.S. Lewis, listening to various podcasts, cruising around the city on her bike, and listening to the classic R&B stylings of Otis Redding and Sam Cooke.