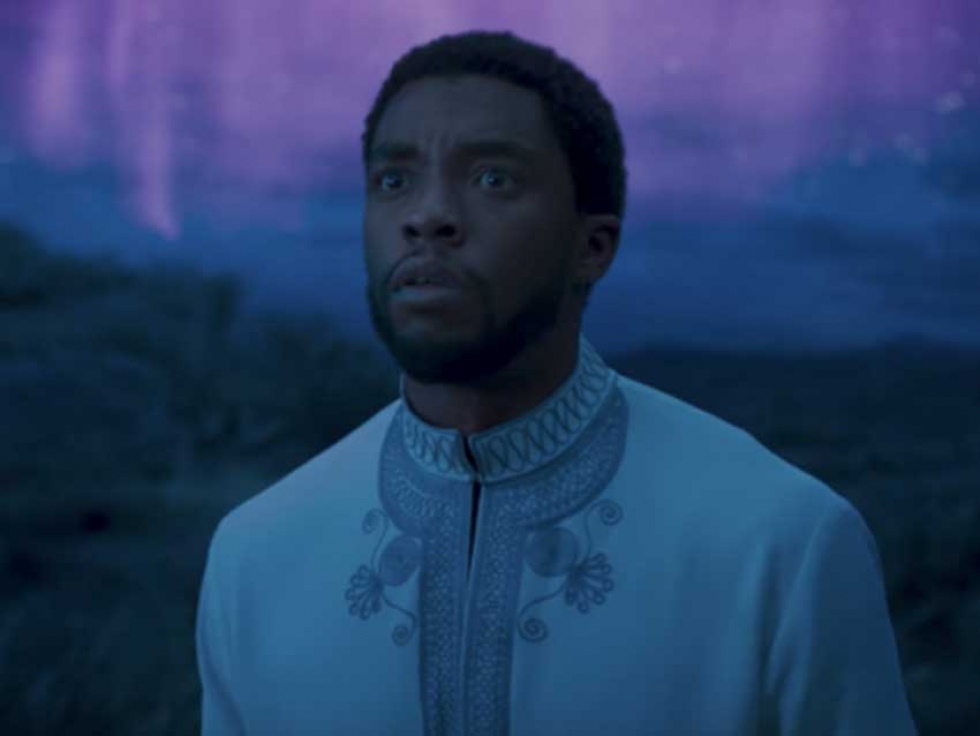 King T'Challa sporting what looks like a South Asian sherwani while visiting the ancestral plane in the film Black Panther.
30
Mar
2018

Some of these critiques have made headlines, such as this article by Indian Canadian Faisal Kutty in the Middle East Eye expressing disappointment with the film for being unintentionally Islamophobic because of its opening scene. The scene itself depicts Nakia, acting as an ally and spy to free the women abducted by Boko Haram in Nigeria. In the scene the women are saved and Nakia spares a young boy who attacks T'Challa because he is a child soldier. In a challenge to Faisal Kutty's article, writer Sultanah Parvin, also writing for Middle East Eye, states "As a woman from the Muslim faith and who hails from the South Asian diaspora - and who is heavily involved in work to expose Islamophobia - it hasn't gone unnoticed by me that most of this criticism of the film and this scene comes from outside the Black Muslim community and, more pertinently, has not come from African Muslims. Most of the criticism has in fact come from South Asian critics and viewers."

In her article, African American Muslim writer Margari Aziza Hill explores what she calls the “Muslim derailing of ‘Black Panther’” mostly by South Asian and Middle Eastern Muslims, and states “Those arguing that the film is Islamophobic are pitting Black Muslims against their two identities. To watch the film, they have to wrestle with whether celebrating this moment is betraying their faith. It truly is exhausting when non-Black Muslims exercise their cultural capital to speak for all of us…”

Countless Black Muslims have stated that they, as people also are deeply impacted by Islamophobia, did not find this scene to be Islamophobic, in fact they found it to be an accurate portrayal of the situation. In the aftermath of colonization and the ongoing neo-imperialism that Africa as a whole is subject to, the Boko Haram scene allows for an understanding of how fragmented societies can become after being destabilized for centuries on end. As Canadian writer Amal Matan writing for Muslim Girl states "The film doesn’t fully unpack the underlying themes exploring the causation of radicalization until the introduction of Erik Kilmonger. It’s through Nakia we see that a recognition that the boy is another victim of the aggregating geo-political gashes left in Africa by colonialism — just like the kidnapped women and girls."

It seems the problem of those claiming Black Panther to be intentionally or unintentionally Islamophobic is inherently not an issue with the actual movie- it’s an issue with anti-Blackness that runs rampantly in many communities- including the South Asian Muslim community as well.

As a South Asian Muslim, witnessing the backlash from my community to the film, made me recall how much work needs to be done collectively- in particular by those with privilege, to address anti-Black racism in our communities. Furthermore as a light-skinned South Asian Muslim woman who comes from two ethnic minorities in South Asia, I recognize that there are multiple systems of oppressions at play in our lives but these negatively impact lower class and lower caste peoples such as Dalits, dark skinned and Black South Asians the most.

Furthermore, Black South Asians face discrimination on their lands and in their homes even though they have been in the region for centuries and are imbedded culturally in their respective areas as well. Over the centuries, many came as merchants and slaves brought by the Middle Eastern and Portuguese slave trades. Thousands call Karachi in Pakistan home, where they face socio-economic marginalization. Black South Asians are subject to multitudes of oppression - even at times being denied celebrating their histories and festivities out of fear for their safety. This history of class, slavery, shadeism and casteism intersects in ways that have been and continue to be violent for people on the subcontinent and abroad- but the histories are discussed seldomly, let alone in their entirety.

Khoja Muslim Canadian author M. J. Vassanji, originally from Tanzania, explores this hierarchy in his work, along with the longing for lost homelands for South Asians who left East Africa because of post-colonial social upheavals and the actions of dictators like Idi Amin. However, South Asian communities still thrive in Africa, particularly in countries such as South Africa and Kenya.

There are examples of Gandhi requesting that colonial authorities maintain this racial hierarchy by not degrading South Asians by forcing them to share post office entrances, neighbourhoods or prisons cells with the “natives” of South Africa. For this reason, students in Ghana and even here in Canada, such as at Carleton University in Ottawa, are demanding that statues of Gandhi be removed from their campuses.

These biases and perceptions continue to go unchecked within our communities on a communal, familial and individual level here in Canada, leading to harmful comments, actions and articles by South Asians that act to maintain the marginalization of Black peoples in Canada and abroad.

It seems that some South Asian Muslims were writing out of disappointment about feeling that Black Panther marginalized them and all Muslims, but these same people are often silent when faced with the ways their words and actions continue to marginalize Black peoples, both Muslim and non-Muslim. In the current context of where conversations around community and inclusion are more important than ever, actions like these demonstrate both willful ignorance and injustice.

Islamophobia is a very real phenomena that is rampant in the world right now- this can be seen from the Quebec Mosque shooting last year, Muslim Bans and anti-Muslim Lynchings in India and Sri Lanka. Here in Canada, the Somali community who are often at the vanguard of activism for the most marginalized, is fighting for Justice for Abdoul Abdi, a victim of the anti-Black racism and Islamophobia of the child welfare system, who was repeatedly failed by Canadian systems and now faces deportation.

Now is the time to strengthen our communities from within, this means challenging the way our own biases and prejudices weaken our ability to work effectively across the diversity of Muslim communities and in solidarity with other marginalized communities in Canada.

Grappling with our own anti-Black racism and shadism is a good place to start.

Manaal is a writer, artist and community organizer in Toronto. She writes primarily about issues pertaining to violence against women, Islamophobia, South Asia and race using the conceptual frameworks of anti-oppression, intersectional Feminism and Post-Colonial Theory. She identifies as a Kashmiri-Pathan Muslim woman.

You can find her at: @ManaalFarooqi