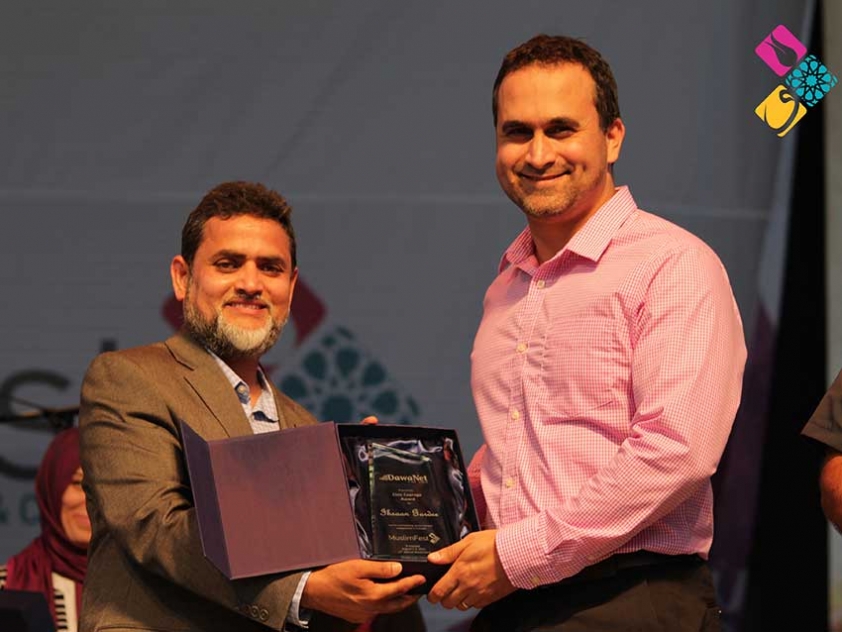 Ihsaan Gardee is the Executive Director of the National Council of Canadian Muslims (NCCM) based in Ottawa. He was honoured with the Civic Courage Award at Mississauga’s MuslimFest in August of this year for his service to Canada’s Muslim community.

But Gardee, who started out working with NCCM in 2006 as their Community Relations and Operations Director and became the organization’s Executive Director in 2008, came into the field of human rights and civil liberties unintentionally. Gardee built his career as a professional in the fields of marketing, communications, and strategy in the private sector working with start-up companies.  He assumed his work with a non-profit like NCCM would just be temporary. “It wasn’t a long term plan for me to do this kind of work,” he shared. But he has now been with NCCM for almost 10 years.

Although NCCM is probably best known for its media commentary, that is not the central work of the organization. “The day to day work of the organization is dealing with discrimination against Muslims,” Gardee explained, “Supporting somebody who has been told they can’t pray or wear hijab at work that is really the bulk of the work we do. The high profile stuff grabs the attention of the media and the general public, but our day to day work is equally important. Each case that we receive is one where the individual affected is very concerned about [the issue or situation] so we have a very structured process in how we deal with cases, so that we can make sure that we are giving them our attention, so that there is a consistent level of quality of service which is reflective of the level of professionalism the organization strives to achieve.”

But Gardee recognizes that there is a need for more outreach on the part of the organization to the average Muslim on the street. Gardee has strived to try to make the organization more open and accessible to a diversity of Muslims. The reality of Islamophobia in Canada is that it doesn’t discriminate between Muslims so Sunni, Shia, Ismaili, and Ahmadiyya Muslims are facing discrimination and hate crimes in the current climate. Gardee wants them to know that NCCM is there to help them. “One of the things that we very clearly say is that the organization is not a religious organization per se, we are not here to issue religious edicts or fatwas about what is or is not correct Islamic practice,” he explained,  “we are first and foremost a human rights and civil liberties organization. We are informed by Islamic principles of mercy, justice, and compassion. When we receive a complaint we never ask what sect a person is from or their ethnic or national background. People will sometimes volunteer that information but it doesn’t influence our service to them in any way, shape, or form.”

Gardee has seen the organization through its important rebranding from being called the Canadian American Islamic Relations-Canada (CAIR-CAN), to the more Canada-centred National Council of Canadian Muslims (NCCM), as well as internal changes which have enabled the organization to be more transparent and accessible to its donors, Muslim Canadians, and the general public.

The skills he brought from the private sector have benefited NCCM. “When I first joined the organization, in many ways it bore striking similarities to a lot of start-up organizations,” he explained, “Most start up organizations when they are first formed are usually put together by people with a great degree of passion who are highly motivated, very intelligent individuals and because of that commitment and passion they are able to achieve a great deal in a short amount of time. The challenge lies in the fact that many of these individuals, after they have felt they have achieved their initial objectives, will move off to pursue other interests and the difficulty then becomes how do you capture the institutional knowledge that has been generated? And how to create systems and policies so that the organization moves from being dependent on personalities and individuals to becoming system-dependent so that you create a sense of continuity and structure for the organization so that new individuals can come in and build on what has been done before?  When I train new staff, I tell them don’t just do the work but write down how you did the work so that if you should move on, the person who takes over can see not just what you did but how you did it, what worked and what didn’t. That way we are not constantly reinventing the wheel.”

The child of a South African Indian Muslim father and a Swedish Lutheran mother, who met each other as recent immigrants to Canada, Gardee grew up within both cultural and religious traditions. He admits that “earlier in my life I hadn’t been really active or engaged in the Muslim community.” He began volunteering with NCCM as a way to “give back to the community and engage with the community in a way I hadn’t before.” But he feels that both his upbringing and comfort both within and outside of the Muslim community has helped him with his work with NCCM. “I grew up seeing both celebrations from different traditions and being exposed to different perspectives. I hope this has informed my ability to try to see things with an open mind,” he shared.

Having an open-mind has been necessary as Gardee has had to navigate NCCM through some very troubled waters, including

Gardee also often finds himself having to speak to media on a number of subjects which can seldom be predicted for one day to the next. From

Another challenge NCCM faces is funding. The non-profit advocacy group depends entirely on Canadian donors. “That’s part and parcel of the challenge of working in this field,” Gardee explained, “any non-profit needs to effectively communicate the value of the work it does to its constituents and to broaden that reach so that you are always reaching new people who might support your organization not just in terms of dollars and cents but also in terms of volunteering, or even just providing input and insight from their perspectives because that is especially valuable.”

Despite these challenges, Gardee considers his work a blessing. “The biggest blessings of the work for me is to be able to meet with Muslim community members from across the country,” he shared, “People who day in and day out work for the betterment not just of the Muslim community but for all Canadians. Their work goes largely unrecognized. They are the most dedicated, passionate, generous, and incredibly motivated individuals that I have ever had the privilege to meet. I find meeting these individuals inspiring and it helps me put my work and my challenges in perspective when I see what they are up against.”

Another positive aspect for Gardee is working with the great staff at NCCM, whom he points out when emphasizing the need for more Muslim Canadian organizations to include female leadership; the staff at NCCM is entirely made up of women.  “That’s why we get so much done with so little time and resources!” he pointed out. He also makes a point to highlight the sacrifices made by spouses, children, and other family of NCCM team members (past and present) who have to put up with a lot – including time away. “We could not do what we do without the incredible support of our spouses and family. Quite simply, they are some of the key unsung heroes of this work.”

Gardee is also grateful for the many non-Muslim colleagues he has been able to work and collaborate with over the years; people such as Franco-Ontarian Roch Tasse, the recently retired co-ordinator of the International Civil Liberties Monitoring Group (ICLMG). “It is amazing to see him work. Our nickname for him is the ‘Rock Machine’ because he is able to digest so much information and work on so many different issues at one time,” Gardee shared.

Amnesty International Canada’s Alex Neve and Hilary Holmes are two individuals he is grateful to work with. “I’m constantly amazed by their commitment and generosity of spirt,” he shared, “Their willingness to work together and to support others who are striving for social justice and human rights.”

He also values his exchanges with Balpreet Singh, the legal counsel for the World Sikh Organization in Canada. “He is working tirelessly in his community in a similar advocacy role as mine,” Gardee explained.

Despite having accidently fallen into this line of work, striving for social justice was something Gardee was raised with. “I grew up towards the end of apartheid and I saw how that affected my family personally,” he explained, “When my parents and I travelled to South Africa, we couldn’t travel together because at the time it was illegal for them to be married because my mother is White and my father is not and that was against the law in the country at the time. My father could have been arrested. So I think that along with my mother’s background from Sweden and that country’s focus on social justice, my parents’ experiences have certainly influenced how I view things and the motivation that I take with me in coming to work every day.”

As a father of two daughters, Gardee also feels he is working to make Canada a more accepting society for them.