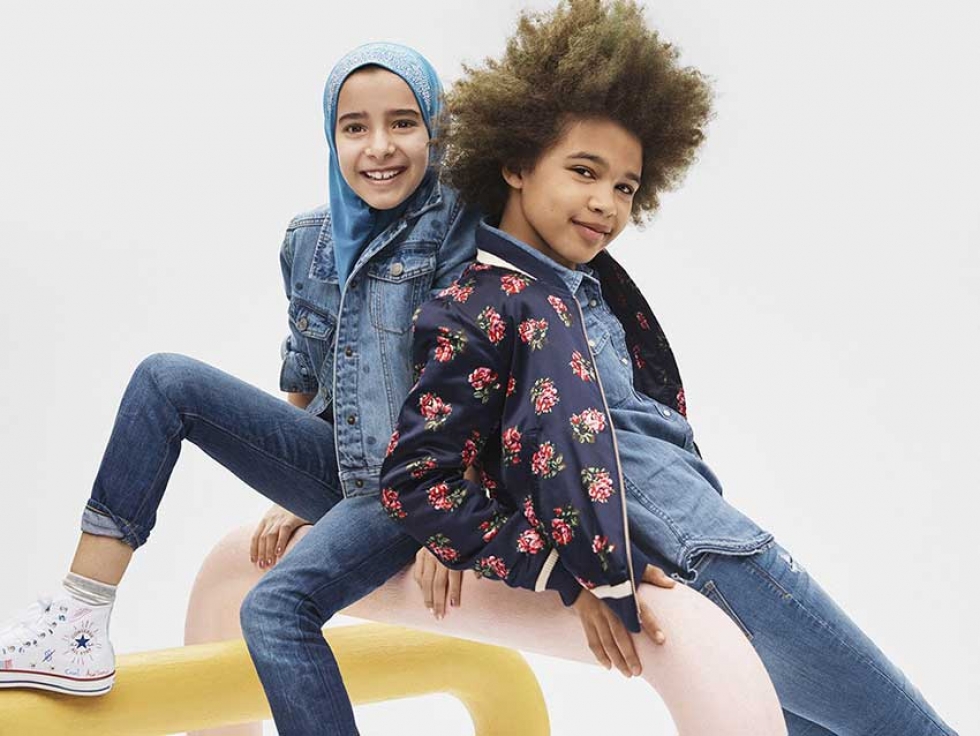 Gap released a back-to-school ad campaign a couple weeks ago which included a picture of a young girl wearing a hijab which raised many questions for many people. Gap Inc.
29
Aug
2018

Gap released a back-to-school ad campaign a couple weeks ago which included a picture of a young girl wearing a hijab which raised many questions for many people.

In July, Gap launched its back to school advertising campaign featuring a group of children of colour from P.S. 153 in Harlem, New York, including a young girl wearing a hijab. The ad spurred positive media coverage for its celebratory inclusivity and a massive virulent debate on social media.

Many applauded Gap’s decision, which they perceived as empowering women and girls around the world. Some who wear hijabs or wore hijabs shared the struggles they faced to find comfortable clothing in middle and high school.

Hamida Ahmed, a well-known model and Miss Maine pageant winner, expressed her approval in a tweet.

Others were outraged by the picture of a young girl in a hijab. They brought up stereotypes about Islam, including child marriage, as well as highly publicized cases of honour killings.

There were similar reactions from French and Canadian citizens to the Gap ad.

Journalist Sophie Durocher of the Journal de Montréal said that she almost choked when she saw the ad.

France and Canada do not share the same stance on hijab in schools. In 2004, France, a secular state, banned all religious symbols in schools.

Unlike France, the Canadian federal government protects the right for reasonable accommodation, which includes religious accommodation.

In France, the Féministes laïques started a first petition titled “le voile n’est pas un jeu d’enfant!” (the veil is not a children’s toy) on Change.org. The petition has gathered to date almost 8,000 signatures. In Canada, a second petition with the same title has about 1,000 signatures.

Islamophobia is on the rise in the West; it is up 250 per cent in the U.K., France and Canada. Sidrah Ahmad, a student researcher looking at Islamophobic violence faced by Muslim women in Toronto, says Islamophobia in Canada has gradually risen to a boiling point.

In 2016, a Montréal school teacher denied one of his students her right to take an exam unless she showed him her ears, which she refused to do.

Last spring, a teenaged basketball player, Je'Nan Hayes, was benched at her team’s finals in Maryland. She had played the whole season but according to the regional referee did not qualify for the playoffs due to national rules about headwear.

In Toronto, an 11-year-old-girl in a hijab was put under the media spotlight when she made up a story of being attacked by a stranger. Many demanded that she publicly apologize, forgetting she is a child acting normally; children do lie sometimes. A scared child can sometimes “come up with her own personal bogeyman.” .

Some Muslim women and girls have “chosen” to stop wearing the hijab to escape the feeling of being labelled, misjudged, incompatible with their community or unsafe.

Gap’s use of models in hijabs is not new; the brand depicted women wearing headscarves in its 2017 ads. That initiative also spurred mixed reactions.

But the idea of young girls wearing hijabs seems to whip up the urgency to save young girls from political and religious agendas.

Gap is not the first clothing brand to show a woman wearing a headscarf. In 2016, Dolce and Gabbana introduced a line of hijab and abayas that Muslim women worldwide celebrated, though some felt excluded by the use of a white model.

In December 2017, Nike launched the Pro Hijab saying they wanted to “make sports an inclusive space for Muslim women.” However, they forgot to acknowledge the many women in hijabs who had already claimed their rightful place in the athletic world. 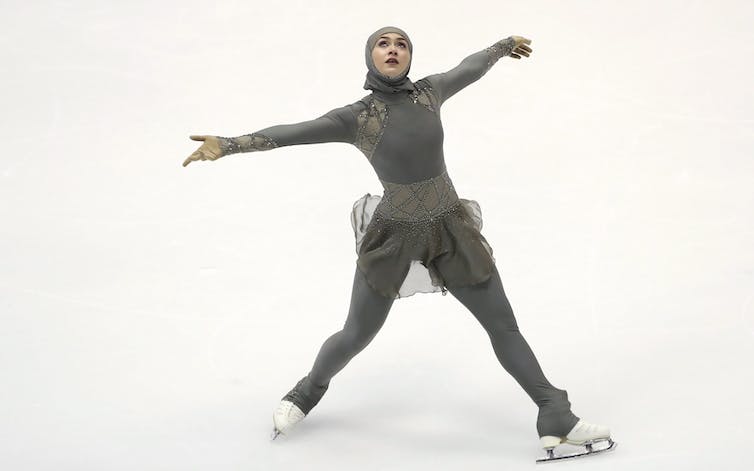 Zahra Lari of the UAE performs during the women’s short program of figure skating competition at the Asian Winter Games in Sapporo, Japan, in February 2017. (AP Photo/Eugene Hoshiko)

In Canada a couple of months before the launching of the Pro Hijab, a Winnipeg high school ordered custom hijabs for their athletes. They were the second high school in Canada to do so.

After Nike’s launch, a din of tweeters promised to boycott the brand and accused Nike of normalizing the domination and oppression of women. The tweeters escalated to condemn hijabs and even equated the hijab and Islam with terrorism. 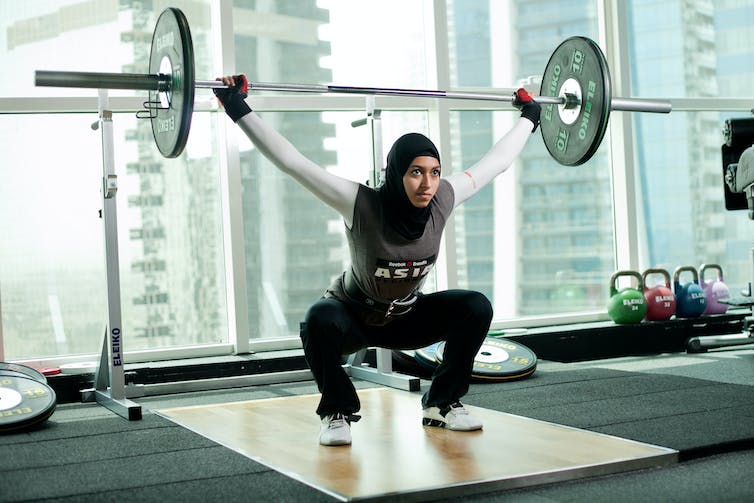 Amna Al Haddad, a UAE weightlifter, was one of the inspirations for the Nike Pro Hijab line. Nisaa

The issues around wearing a hijab is complex. Many people know very little about Islam, let alone about what the hijab actually means for the women who choose — or are forced — to wear it, or for those who don’t wear one.

I am a Muslim woman. I do not wear a hijab. This does not make me less of a Muslim. But the West tends to represent all Muslim women, veiled or not, by the hijab.

A negative connotation has been attached to the hijab through news media, movies and popular discussions where many claim Muslim women are oppressed and need to be rescued, despite its value to those who wear it.

The hijab for young girls is not only opposed by non-Muslim white feminists wanting to “save” young girls from an “oppressive religion” but it is also opposed by some Muslim women. They perceive early hijab as supportive of child abuse, misogyny and of denying women their rights starting at a young age.

Many shared novelist Samina Ali’s TED talk, in which Ali explains the origins of the hijab. Ali says the headscarf has never been a requirement of Islam; that the the verses of the Quran only advise Muslim women to dress based on custom and function. Rather, the hijab was a contextual solution to a problem that occurred more than 400 years ago.

Hajar J. Woodland, the U.K. singer and writer, says: “The right to cover is just as important as the right to uncover.”

Amna Al-Haddad, a professional Olympic weightlifter who competed in her hijab and consulted with Nike on the Pro Hijab, has appeared lately without her veil.

But not all Muslim women have the right to make their own choice. For example, Iranian women are being jailed for exercising their choice with headscarves.

Some also feel that girls are persuaded by unexamined cultural norms such as “carrying the flag of Islam,” “being a good daughter,” “following great women in Islam,” “looking like my mother,” “looking like an angel,” and “going to heaven.”

Gap is not the only brand that did not understand how their marketing message affects their global audiences. Gap made a few mistakes despite its potential good intentions.

Gap introduced its first girl in hijab in a back-to-school advertising campaign. In many Western schools, hijabs on young girls are controversial. They are banned in some countries, like France and Austria, and highly criticized in others.

Gap assumed their attempt to normalize the hijab on young girls would help Muslim girls feel included, like the world was theirs: “Hey young world, the world is yours”. But the rise in hate crimes and bullying based on racism and Islamophobia is on the rise, and so the message is not that simple.

Gap assumed that young children, specifically Muslim girls, are equipped to deal with complex reflections about what religious head wear entails in Western societies. Many of these young girls find themselves in the midst of very heated religious, cultural and political debates.

Did Gap purposefully create a controversial ad? Is the idea that no publicity is bad publicity true? While many applauded Gap’s inclusive ad, many western audiences were horrified by it, and many Muslim women relived bad memories they were trying to flee.

Nadia Naffi is an Assistant Professor at Concordia University in the Educational Technology program and an expert in designing, developing and facilitating synchronous and asynchronous online courses and experiential and interactive learning, in a problem-based learning approach.

She is a recipient of the Goveranor General Gold Medal, 2018.

As a performance consultant by training, she examined through her SSHRC funded research the influence of social media propaganda and hate speech on the social inclusion and social integration of refugees, notably after terror attacks.