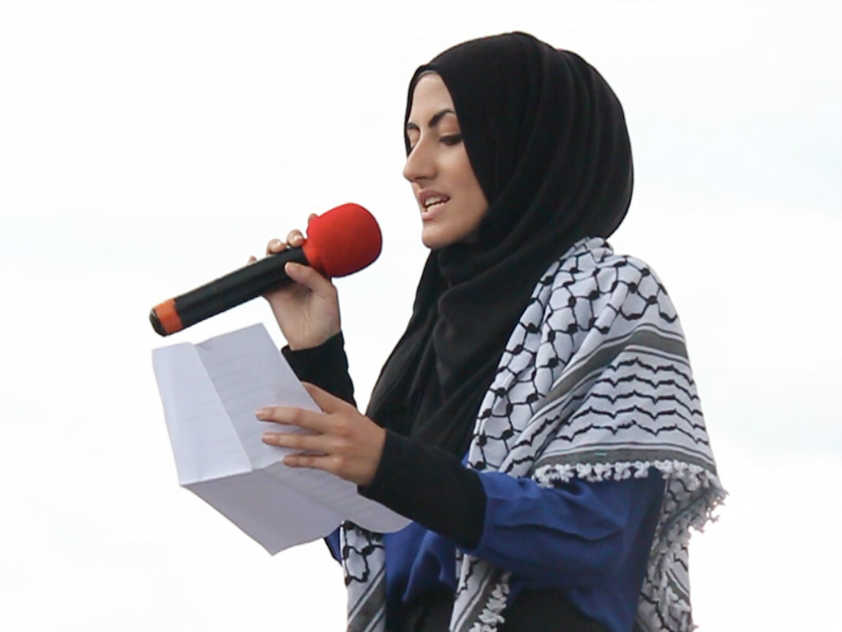 The Brookfield student, who is heading into her final year of high school, first became involved in spoken word poetry in junior high when poets Greg “Ritalin”Frankson and Beth Ann-Fisher ran a two-day workshop at Fielding Drive Public School. “They heard me perform and told me that the youth poetry slam scene was starting up in Ottawa and I should check it out. So I did and became a regular slammer and started attending other slam series around the city,” she explained.

Haneen started out with the Ottawa Youth Poetry Slam, which provides a space for children and youth interested in spoken word to hone their writing and performance skills. Haneen went onto compete and win there and subsequently her efforts have landed her a spot on the Urban Legends Poetry Slam team. “The highlight of my Spoken Word career so far is getting on the Urban Legends team this year,” she stated, “I've been working for the last three or so years to make it on this team.”

Haneen credits several local poets, such as Prufrock Shadowrunner, Array of Words, and Just Jamaal, for having helped her develop as a poet and hone her skills as a performer. “They always pushed me to improve myself as a person and as an artist,” she explained, “Always giving me pointers, and pointing out the positives. Also, little pep talks from Prufrock when he coached me last year when I was a member of the Ottawa youth team made me believe in myself and my art more.”

Haneen has found Ottawa's Spoken Word scene to be quite welcoming for her as a young Muslim woman who wears hijab. “There are so many Muslims from different backgrounds who are active in the scene. Therefore, I always felt welcomed and appreciated in the scene,” she explained, “People perceive the hijab as a religious symbol and it does not affect how they view me in anyway. In fact, I feel people respect the fact that I am representing my religion in a positive way and challenging the propaganda that is set about Muslims in the media these days. When I perform at various slams and events, especially where the majority of the people are not from a Muslim background, I try my best to represent Islam's true values through my art. People have spoken to me and said that they respect the way I represent Islam.”

Haneen came to Canada with her family six years ago. Like many Palestinians who have immigrated to Canada answering the question ‘Where are you from?’ isn’t easy. “I am originally Palestinian [from Nablus], I carry a Jordanian passport and I was born in Dubai, U.A.E.,” she stated.

Haneen lives in Ottawa-South, the riding with the country’s highest concentration of Arabs and Muslims. The riding also has the city’s highest concentration of low-income housing. “My neighbourhood is a clear example of classism in the world,” Haneen stated. “While you're driving down the street, it varies from the ghetto, and emerges into very nice and big houses.” Haneen’s family lives in “one of the big, nice houses but that's also because we're a big family,” she explained. Witnessing the dramatic contrasts between rich and poor in her community has influenced her poetry. “It made me conscious about who has a voice and who's the voiceless in the world,” she stated.

Life in her neighbourhood has also focused her attention on issues like youth gangs, which she reflects on in her poem “Uplands Boys”.

Is for you too boys

You're the ones I used to see in that Uplands corner

And I used to walk by you like you're criminals

But I realized that life and poverty are the criminals

They're the ones who stole your innocence

And buried your sorrows in a Smirnoff bottle

Recently, Haneen has been busy preparing with her team to compete in the second annual Youth Can Slam National Poetry Festival. “Preparing for Youth Can Slam requires a lot of work and dedication,” she explained, “First thing, it's coming up with prompts that the team members agree upon to be written as a team piece. Memorization is essential when it comes down to the team pieces and perfecting the parts that are recited together. Regular practices occur to assure that the team members are working on their own as well and practicing their parts. Individually performed poems are edited and looked upon by the coaches and team members for feedback.”

As an individual she will be performing a poem on unjustified shootings of African American boys. “I chose that topic because there have been many stories that make headlines but there are so many other ones that are unheard of and it's an ongoing issue,” she explained, “It relates to my Uplands Boys poem as in the subjects are minorities who take bad decisions just to get by in life.”

Haneen will also be performing a personal piece about the issue of domestic violence. “I hope it empowers those who have been silent,” she explained.

Having found respect in the Spoken Word scene at such a young age has made Haneen something of a role model to up and coming local teen poets. “I have had people tell me they consider me as a role model,” she stated. “I feel honored and happy but also burdened because being a role model to people is a responsibility,” she explained.

Her grasp of the hard work that is behind the Spoken Word performances that audiences often perceives as effortless makes Haneen Al-Hassoun a worthy role model and mentor for aspiring youth poets.