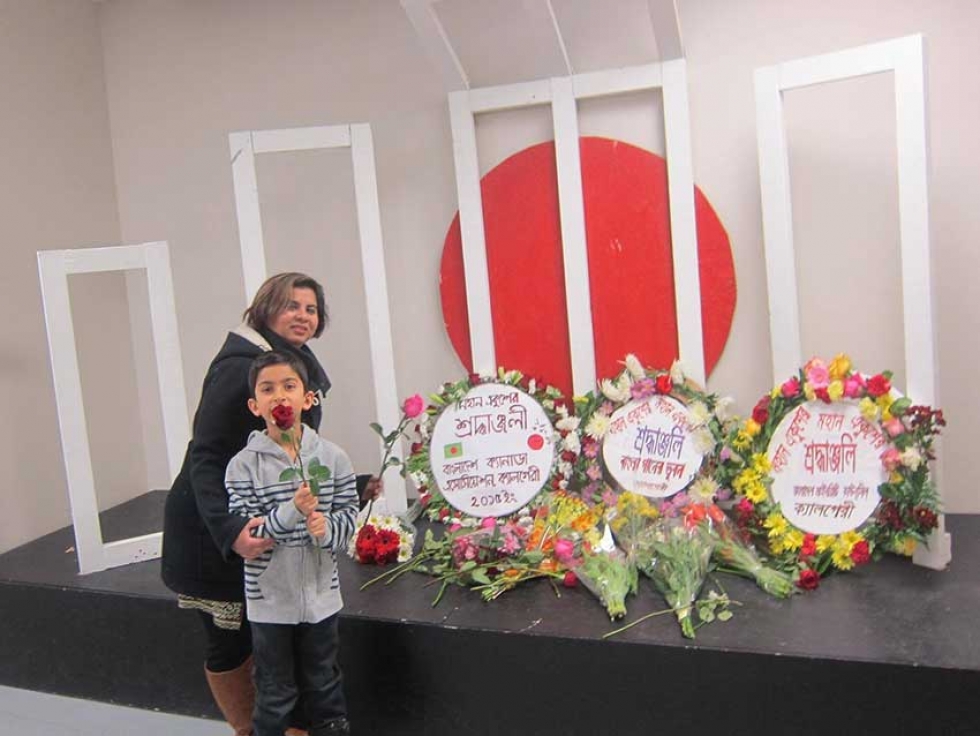 Saima Jamal with her son at the Bangladesh Centre in Calgary celebrating Ekushey February.
21
Feb
2018

In 1999, United Nations proclaimed February 21st as International Mother Language Day as a way to promote linguistic and cultural diversity. This date was chosen in recognition of the 1952 Bengali Language Movement in what is now Bangladesh.

My “Abbu” (father) came from a Bangla-speaking family while my Ammu (mother) hailed from a Urdu-speaking family. It’s a common phenomenon in Bangladesh because before the 1971 war, we used to be East Pakistan and families that spoke both languages lived in both East Pakistan (now Bangladesh) and West Pakistan (now Pakistan). Growing up, my brother and I spoke both languages, at home we spoke Bangla and in my maternal grandparents' house we spoke Urdu/Hindi mixed.

You would think that would have given me an advantage growing up learning two different languages and a third language, English, at school. However, language was one of the biggest causes of strife in our family. Every time we accidently spoke Urdu at home, Abbu’s thunderous anger would shower upon us and this continued throughout most of my childhood until I left home to come to Canada to do my undergraduate studies in 1998.

When I was little, I didn’t understand why Abbu always got so angry when I spoke in Urdu at home. In fact, sometimes when I would get very angry with Abbu over something, I would speak in Urdu just to get back at him and that just made matters even worse.

But every year as February 21st would approach in Bangladesh, the TV programs would be full of the history of our Language Movement. I didn’t pay much attention to it growing up because the TV programs were very dry and boring. Eventually, I reached an age where I started to want to try to understand my Abbu’s perspective. Why was it so important for him that we spoke in Bangla and not Urdu? One day, Abbu finally sat me down and told me he never wants to hear me speak in Urdu as long as I live under his roof. This time I quietly listened because he wasn’t angry but strangely quiet in his attitude. This time he had my full attention.

On February 21, 1952, students gathered at the University of Dhaka to demonstrate in support of Bangla as an official language. They clashed with police. Later students gathered at the legislature and tried to storm it so the police opened fire and several students were killed. When news of their deaths spread, unrest broke out across Dhaka leading to more deaths and thousands of people being arrested by police. My father recited the names of all those who were killed off by heart.

My father told me how after years of protest, finally in 1959, the military regime declared East and West Pakistan to have two official state languages. He told me how the Language Movement was the first major trigger that started the hunger for independence and finally the separation from West Pakistan and the formation of Bangladesh. That’s how I learnt about the significance of “Ekushey February” or February 21, the day when the largest language protest erupted in Dhaka.

It is after I came to Canada that I discovered that “Ekushey February” is no longer just a red-letter day for Bangla speakers all over the world but February 21st is officially recognized by the United Nations (UN) as the International Mother Language Day. The purpose of the day according to the UN, is “to promote linguistic and cultural diversity as well as bring focus on endangered languages and the importance of preserving these languages”. I felt so proud to know that this movement originated in Bangladesh.

Finally, I was so happy when my family was able to celebrate this day right here in my Canadian home, the City of Calgary, where we dressed up in traditional Black and White saris, and paid homage to the Language Martyrs by laying flower wreaths to a miniature “Shaheed Minar” at the Bangladesh Centre. The "Shaheed Minar" is the name of the monument built to remember those who died during those demonstrations. Every February 21st, people visit the monument in Dhaka. Every year when February 21st rolls by, Abbu’s talk again comes to my mind and I rejoice in speaking Bangla and my Abbu’s legacy.

Saima Jamal is a Bangladeshi Canadian community organizer and peace and justice advocate who works passionately in improving our world by working for human rights, peace, interfaith, political activism, gender, humanitarian aid and the environment.