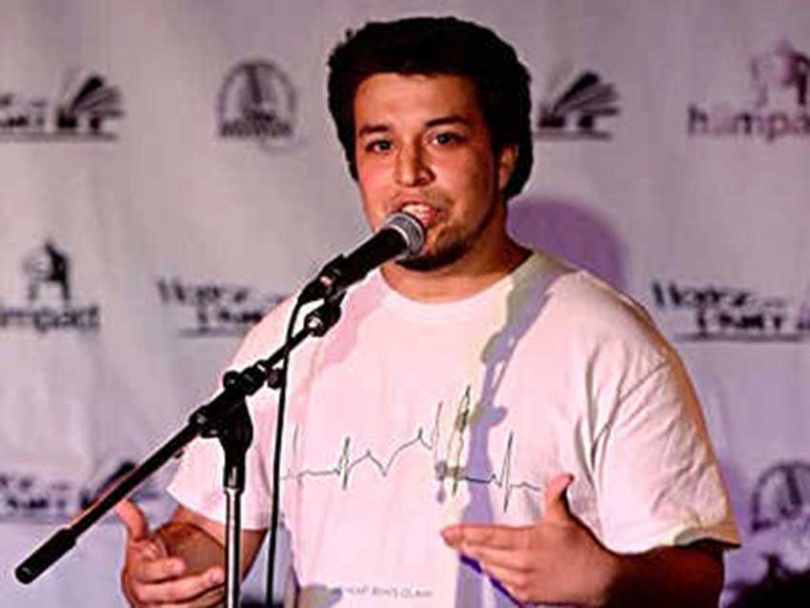 “I HATED English, which makes the whole poetry thing a surprise even for myself,” shared Ali Awada about his unlikely success as a rising star in Ottawa's Spoken Word scene. Ali, 23, grew up in Detroit, the son of Lebanese parents who decided to move to Canada when he was 10.  Ali broke onto the scene at Capital Slam in December 2012. He placed second in his first ever competition, and then won first place the next week. Ali took the stage name ”˜Ali Islam' and “the rest is history.” He has performed at Muslim community events from high school Eid Dinners to the Muslim Association of Canada (MAC) Eid Festival, and recently opened for YouTube sensation FouseyTube in Montreal during his Canadian tour. You will find Ali performing solo or in the hip hop group House of Halaal with Jae “Deen” Asare.

Ali has a long time passion for lyrics and has made time to pursue his interest despite working full-time doing home renovations. “I used to rap before I started properly following Islam again. That was actually when I met Jae Deen who's my partner in entertainment right now in House of Halaal. We would rap together and over time after he converted and I started getting closer to Allah, music sort of turned me off,” Ali explained. Spoken Word has provided a lyrical outlet for Ali that doesn't require the use of music.

Ali sees Spoken Word as one of the best ways to bring people together across the boundaries of faith. “My pieces bridged the gap between Islam and this society” Poetry is a language everyone understands because of its power and emotion. Furthermore if you try to explain Islam to someone straight up, it tends not to work. But if you gently drop tidbits of Islamic knowledge on them through a piece in which they can relate to the topic, I find it's an extremely effective tool,” Ali explains.

Recently Ali admits his poetry, which has usually been comical, has become somewhat darker. “In every piece I write, I like to take whatever I'm facing and make it relatable to those around me.” I've been focusing on giving it a serious edge lately given what's going on with our Ummah across the world,” Ali explains.

Ali has some simple advice for aspiring Muslim Spoken Word artists, “Do You!” “Stay within the boundaries Allah puts on us as Muslims and then just do you. The minute you compromise your beliefs because someone doesn't agree with you is the minute your poetry becomes not your own. Just take what Allah puts in your heart, put it out on paper for His sake, and then just do you,” Ali elaborates.

Ali is particularly excited about an upcoming opportunity to perform in New York City. He feels that his hard work as a poet in Ottawa has rewarded him with recognition and opportunities. “I'm not one for the spotlight or fame but it is a beautiful feeling knowing that when you do something for the sake of Allah, He rewards you with success. Montreal was an amazing testament to my hard work as an artist. And I feel like my hard work here in Ottawa had rewarded me through a performance with Boonaa Mohamed and then NYC.”

I just looked outside at my grandfather's backyard and saw the apple tree that was planted there way back when my mother was a child. That tree has been there for YEARS giving its fruits and providing shade for those who seek it. Acting as a home for various animals. Giving us Apple pie, Apple sauce, Apple crisp, the vinegar my grandmother would make out of them. The amount of blessings in that tree only continues to grow along with its size and age.

The seed is a gift... It's a mercy and a test from Allah. When you give to a seed for so long, through the changing seasons...sleet, snow, hail...doesn't matter. If you care for that seed, it will one day take care of you.

If you protect Islam, Islam will protect you. If you nourish your children, they will one day grow and nourish you. If you feed the world beautiful words, thoughts, and energy... It will feed beauty back to you...

So looking out at this tree, and seeing my grandfather water it and tend to its branches all these years... I think I get why he did it...

For all the love he put into it? He got way more in return