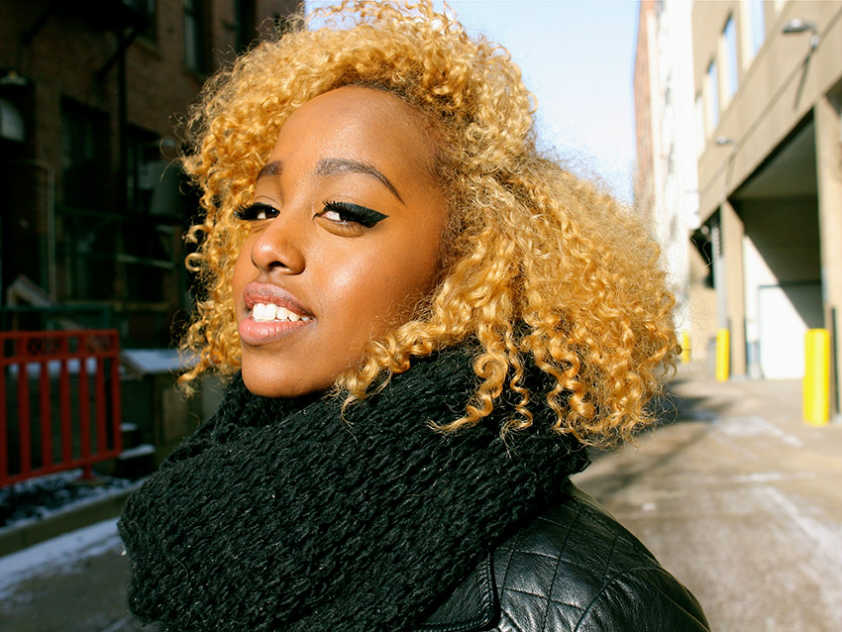 Edmontonian Spoken Word poet Nasra Adem was in Ottawa in August to perform in the Artistic Showcase of the Youth Can Slam National Youth Poetry Festival. But she’s no stranger to the Nation’s Capital. “That was like 10 years of my life!” Nasra, who’s only 20, exclaimed.

She grew up in the Caldwell neighbourhood. “I went to W.E. Gowling Public School where the majority of the school was Somali and Arab”. It was easy for Ethiopian-Canadian Nasra to fit in to the multicultural environment of Gowling, but when her family decided to move to the more promising economic opportunities of Edmonton and to place Nasra in French Immersion, things changed. “I went to an All White school when I got here for junior high so that was a big culture shock,” she explained.

This culture shock would take Nasra on a painful journey of self-discovery. “At 13, 14 you are already trying to figure out who you are,” she stated, “I started speaking differently, my language was different, my taste in art and music changed.” Nasra went from being “loud and out there” with a “big personality” to listening to an inner voice telling her “You can’t do that! No! No! Quiet! Quiet! You need to be small!” “I was Black and I used to wear hijab as well,” she explained, “I already felt like I was being loud enough with my skin colour and my religion so I repressed my personality for a while, like for a couple of years, and it was awful. It took so much effort to hide.”

Nasra has written “all her life” and she documented her struggle with identity in her writing. “Well I had more to write about because I was so confused. If I look back to my writing at the time, I can see the struggle in figuring out what I actually enjoy, what I genuinely connect with, and what I feel like I should connect with,” she explained. But Nasra credits her difficulties with pushing her writing forward.

In October 2013, Nasra started performing Spoken Word. “I’d been watching spoken word poetry for so long on YouTube,” she explained, “so I wanted to see what was happening in my city so I went to an open mic and it was awesome.”

She credits the “small, humble, but growing” Spoken Word poetry scene of Edmonton with fostering her confidence as a performer. According to Nasra, the “mom and pop” of the scene are Somali Canadian Ali Knowmadic and Nigerian Canadian Titilope Sonuga who run the Breath in Poetry Collective. Titilope quickly recognized Nasra’s talent after she saw her perform. “Titi grabbed me by the shoulders and told me that I needed to slam,” Nasra explained, “So I did, and I won the slam, and we went to finals and I won finals…so I just kind of figured it out that I might be good at this.” Her exposure led to more performances and eventually to her being invited to Ottawa to perform at the Youth Can Slam Festival.

Nasra likes to tell a story with her poetry. “I find it easier to connect and to follow a piece if I can find a beginning middle and end in it,” she explained, “I look around a lot. I like making a real connection with the audience.” This also affects the rhythm of her poems. “With spoken word poetry, a lot of poets get into this rhythm and that is the issue with watching a lot of poetry online, it all starts to sound the same,” she explained, “I don’t want to do that. I want people to really hear what I’m saying. So I just talk to them, like I would to a friend, and maybe they will hear it and it will touch them.”

Rome is Nasra’s favourite poem that she has written so far. “It’s my jam. It’s an older poem. It talks about my connection with art and how it is a form of healing for me because that is how my love for the arts started because I needed a way to express myself that was not destructive so I got a journal and I took a drama class and through that I found a lot of beauty in my darkness. Rome is talking about what it means to be admired and loved even when you are not completely whole as well as talking about how art makes me feel complete.”

For Nasra, it was drama that became an outlet for her to express herself after years of having suppressed much of her personality due to the culture shock she faced in Edmonton. It was in drama class that she discovered that “Hey you are loud and obnoxious and kind of funny sometimes maybe and that’s cool, that works for some people, some people find that endearing.” She soon realized that there were many people who appreciated the real Nasra. “I can be loud and it’s cool, being myself has gained me more opportunities and friendships and genuine love than the person that I was before,” she stated.

Nasra now studies Theatre Arts at Grant MacEwan University. Needless to say, her parents were none too pleased by her choice of degree. “My parents, just like so many immigrant parents, are like ‘honours is just regular, honours with distinction is the real honours for them, so you better be getting that 90 and up because we don’t play’,” Nasra stated.

But she is grateful to her mother, who she calls her “best friend in the whole world” for accepting that this was the path she needed to follow. “She’s been to 600 of my shows, she’s seen what it means to me on stage, she’s seen the light come from my body so she can’t really argue with it anymore,” she explained, “She wasn’t always for it, when I was trying it out, but now she’s on the ride, she’s going with me.” Her father has also come to accept her choice, though less enthusiastically, “He’s like ‘It doesn’t look like you are backing down at all so I guess you are just going to have to go for it’.”

Through her journey to find herself, she has come to appreciate the City of Edmonton. “Edmonton’s dope, it really is. People are like ‘oh it is just an oil city’ but I’m like no we have some solid fringe festivals here and the arts scene is awesome,” she stated. But Nasra sees herself eventually moving to New York. “I just think that is somewhere I need to be,” she stated.

She hopes to someday teach Theatre Arts. “I want to open a studio or school or something for children of colour who just want to be in the arts and don’t understand what that can mean to them,” she explained. Young minds are affected by the lack of representation of people of colour on the stage and on the screen, Nasra feels. “A kid of colour thinks other people of colour are not on the stage so that means I can’t be on the stage,” she stated, “But no, we just need to get more Black and Brown kids on the stage and then other kids will feel like they can get there!”

Nasra wants to give other young people of colour the same gift that the arts have given her. “It has helped me work through a lot,” she explained, “It has also helped me accept a lot, like accept the weirdo that I am.”

To learn more about Nasra Adem, visit her Facebook Page