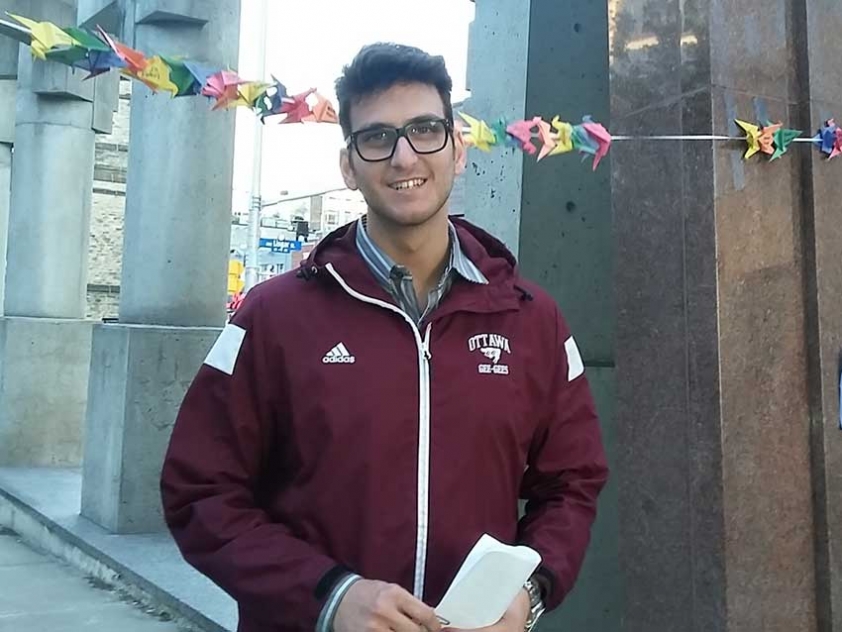 Hadi Wess at the Canadian Human Rights Monument after the vigil for the victims of the Orlando shooting.
16
Jun
2016

A Syrian Student's Reflections on the Orlando Tragedy

Syrian Hadi Wess currently studies psychology at the University of Ottawa, where he is also the Vice-President-Social for the university’s Student Federation (SFUO).

He helped to organize a vigil on June 13th honouring the victims of the Pulse Nightclub shooting in Orlando, Florida. SFUO condemned homophobia, transphobia but also Islamophobia at the vigil, where the tragedy was framed as a hate crime against the LGBTQ community as opposed to a terrorist attack.

Hadi spoke at the vigil about the impact of the shooting on Muslim communities amid fears that this incident would be used to justify further Islamophobia. He also discussed the importance of marginalized communities being allies to one another. Here is his speech.

Hello everyone! My name is Hadi Wess, and I’m the Vice-President, Social of the Student Federation of the University of Ottawa.

Even though I don’t identify as queer or transgender, I am Muslim and an immigrant, and the tragedy that we witnessed two days ago has relevant effects on my community, which continue to contribute to the stigma and stereotype about Islam being a religion of terror, violence, oppression, and aggression.

My heart goes out to the 49 victims and 53 survivors of this tragedy and their families and friends. As a member of the Muslim community myself, I could also say that the victims of any terrorist attack are not only comprised of those who are directly and physically impacted by it. I kid you not when I say that, due to these horrendous and heartbreaking tragedies, people of the Muslim faith across the world feel insecure, victimized, and fearful on account of the rampant and copious levels of Islamophobia, xenophobia, and violence against Muslims, immigrants, and racialized folks that is bound to come from the media, politicians, and others.

Literally, a few minutes after a tragedy or any other event of terrorism, we see thousands of tweets calling for the extermination and deportation of Muslims from the respective country; we see mosques being scorched and destroyed around the world; and we see media outlets, political officials, and fanatic agencies exploit attacks against Muslims and tragedies committed by extremists to spread propaganda in the form of Islamophobia, xenophobia, and racism. They will smear, defame, and slander Islam by using selective and self-serving distortions, generalizations, misrepresentations, misinterpretations, misquotations, and misinformation.

ISIS and other extremist groups are un-Islamic – It’s even wrong to refer to them as the “Islamic State” because Islam and their ugly actions should never be associated. They are not a representation, and are no more than an aberration of Islam. These groups serve nothing but the perpetuation of imperialism, colonialism, and capitalism; and exacerbate the culture of oppression, aggression, and violence against Muslims.

Thus, it is very important for all of us to refuse to listen to the voices of hatred, bigotry, and confusion that only seek to create a monopoly on the discourse of Islam and trade in it. It is crucial that we do not fall for those voices of discrimination and intolerance that will generalize the 0.000001% of extremists that take things out of context and ignore the 99.99999% of true, innocent Muslims that are severely influenced by these criminal acts. By allowing these voices, we would only be empowering extremists and ISIS-type groups and serving their mandates, because the one thing that these terrorists and the haters and bigots have in common is that they both believe that Islam is a religion of terror, aggression, and violence.

The SFUO is here today to recognize and denounce any violence perpetuated towards Muslim and immigrant communities and highlight that, in times of distress, hardship, and struggle, it is important to stay united. These events, no matter how tragic, should in no way be used as an agenda to promote Islamophobia, xenophobia, or racism of any kind.

It is also time to realize our privileges and identities and understand that Islamophobia, xenophobia, racism, homophobia, transphobia, and any other form of discrimination does not end by changing a president, a premier, prime minister, an MP, an executive, or a head of a department or office. We have to change the system, so that these practices and acts of oppression end. It is time for white people and others with privilege to step up and be allies; and to also realize that allyship isn't just standing up for your Muslim, queer, or trans friend once. It is continuous support and solidarity work that you have to do on daily basis.

In Islam, we greet each other by saying "Assalamualaykom" and "Salam" which are literally wishes of the other to be blessed with peace. I follow a religion in which 113 out of the 114 chapters of the Quran begin by introducing the God of Islam as a God of mercy and compassion.

Because my fellow executives and I are in positions of power and we hold different marginalized identities, we are able to get some support and do this work with others who share similar identities and with allies. But in a year or so, we will be gone and this work will still have to continue.

It is everyone’s responsibility to raise awareness to these serious issues and to delegitimize the voices of hatred and bigotry. Those voices of division, intolerance, and discrimination will not hold us back from our right to exist and be who we are. They will not stop us from believing in what we believe in and practicing our faith in peace.

Today, I mourn the lives that were lost at the Orlando Shooting. Today, I pray for the survivors of this tragedy. Today, I'm filled with empathy and sympathy for the families and friends of those affected by any violence or discrimination around the world. Today, I am outraged for my siblings of the LGBTQ+ Community. This is what my religion teaches me to believe in, motivates me to feel, and guides me do.

My name is Hadi Wess. I am Muslim and proud, I am unapologetic, and I am not a terrorist!