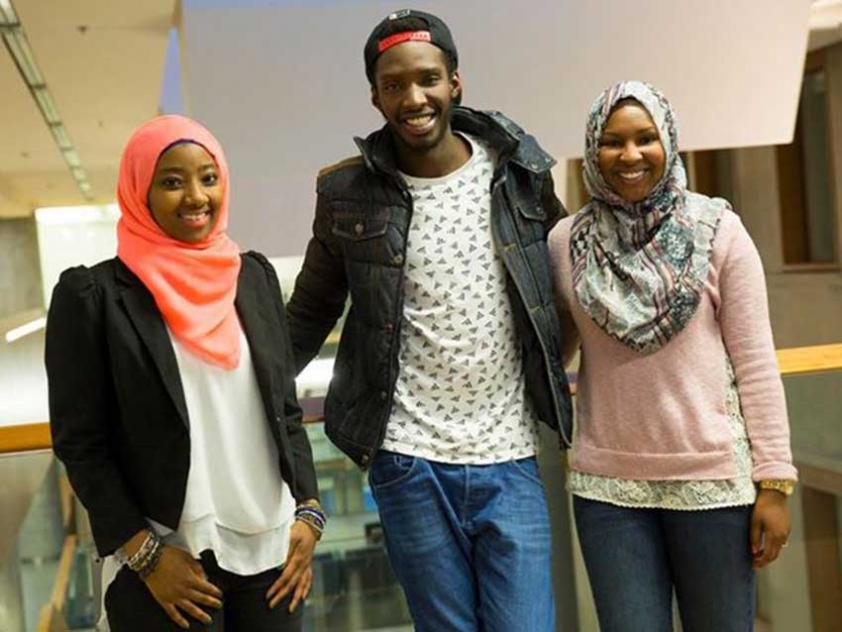 Aissatou Bah, Abdoulaye Sow, and Halima Moumouni appear in a video aimed at showing solidarity with the victims of terrorism in West Africa. Courtesy of Halima Moumouni
07
December
2015

Speaking Out Against Terrorism in West Africa: Building Solidarity

A group of University of Ottawa students created

to raise awareness about the recent terrorist attacks in Mali and Nigeria. Muslim Link interviewed them about why they felt it was important to bring more attention to the reality of terrorism in West Africa. We spoke with the video’s producer Virgille Koffi, and with Halima Moumouni, Aissatou Bah, and Abdoulaye Sow who appear in the video.

Halima is completing her Masters in Women and Gender Studies. Her family origins lie in both Nigeria and Niger. She feels that the reality of terrorism in West Africa has not been properly explored in the media. “The media has been reporting on the situation, although not as much they do for some other situations. In fact it seems to me that they’re covering it as if it was just normal news,” she explained.

Aissatou is originally from Guinea and is studying Health Sciences. “It was important for me to make this video in order to express my solidarity and sympathy to my West and Central African brothers and sisters who have experienced terrorist attacks these past years,” she shared, “It was also a way for me to raise awareness about what is going on in these regions that the mainstream media was barely covering”.

Virgille’s family comes from the Ivory Coast. “I chose the field of media as a career and one of my goals is to be able to create a media structure that will enable developing countries to proactively participate and contribute in the discourse that is created about them,” he explained. He also worries that mainstream media are portraying the violence as “normal” when it is far from it.

Halima has also been disappointed that the violence in the region has been largely ignored by her fellow Muslims, “Being a Black Muslim, it seems that everything happening in our countries is being, if not ignored, completely minimized by the Muslim community”.

“I wish Muslims and Non-Muslims were more aware of the terrorism situation in West Africa,” Aissatou shared, “I would like them to know that every year there are innocent Nigerians, Cameroonians, and Malians that are being killed because of terrorism. This whole thing started in Nigeria and now it’s affecting more West and Central African countries so they should definitely stand with us. For Non-Muslims, I would like to specify that the rise of terrorism in West Africa has nothing to do with Islam. Moreover, it is not a conflict between Muslims and Christians. They should look deeper into this problem because it has a lot to do with economical and geopolitical strategies.”

Virgille agrees, “Coming from Ivory Coast where half the population is Muslim, I want to say that religion has never been directly a major social problem in our history and society compared to popular beliefs. We’ve learned to live with each other’s religious beliefs in respect and harmony”.

Abdoulaye, who is originally from Mali, is currently studying Finance. He hopes that more West African students will get involved in order to focus on building solidarity between nations in the region. “It is [young people] who can make the changes in Africa,” he shared.

Fanta Sow, also from Mali and currently studying International Management, believes the video could help inspire more young West Africans because “it is time that the West African Diaspora, especially young people become interested in the politics of their countries”.

Aissatou agrees that it is up to students like herself to change how the political situation in West Africa is portrayed in the West, “I personally think that if the West African Diaspora doesn’t speak out on the rise of terrorism in West Africa nobody is going to do it. We should start discussions about this issue instead of always expecting others to do so. Change starts with ourselves!”

The students see themselves as responsible for playing a role in the civil society of their homelands particularly as they fear terrorism is spreading throughout the region. “In the world we live in, there is a stronger need for southern countries and especially African countries to stand together, to care and try to help each other because it’s just a matter of time before it is our turn,” Virgille explained.

They hope to organize a lecture with subject matter experts in January 2016 exploring the connection between terrorism and West Africa’s current political landscape. The event will be posted on Muslim Link.