Coalition Avenir Québec leader François Legault on the campaign trail last September before the election that saw his party form a majority government. THE CANADIAN PRESS/Ryan Remiorz via The Conversation Canada
16
Nov
2018

Quebec's push to ban the hijab is 'sexularism'

In 2006, I wrote a book about how Canadians — journalists, politicians, lawyers, teachers and everyday people — are in denial about racism. I explained our tendency to regard explicit racism as something that happened in the United States. Racism in Canada was camouflaged in politeness or regarded as a simple preference. It was erased from the national Canadian narrative, except for exceptional cases where the evidence was irrefutable and could not be explained as an overreaction on the part of the aggrieved, or trivialized as a meaningless irritation.

I thought that things might change over the next decade. But almost 12 years later, the denial continues.

The recent election in Québec which propelled the right-leaning Coalition Avenir Québec (CAQ) into power signals a moment that solidifies this denial of racism. This denial is rooted in the mythology of Québec uniting around its survival of francophone culture (la survivance) in the face of British colonization and its rejection of its Catholic past (through secularism).

Both of these ideas go hand in hand, cemented by the adhesive of language through Bill 101 which made French the official language of business in Québec. Passed into law more than 30 years ago, Bill 101 also promised an inclusive future for minorities in the province, as the only condition to belonging was speaking or learning French and participating in French civic culture. 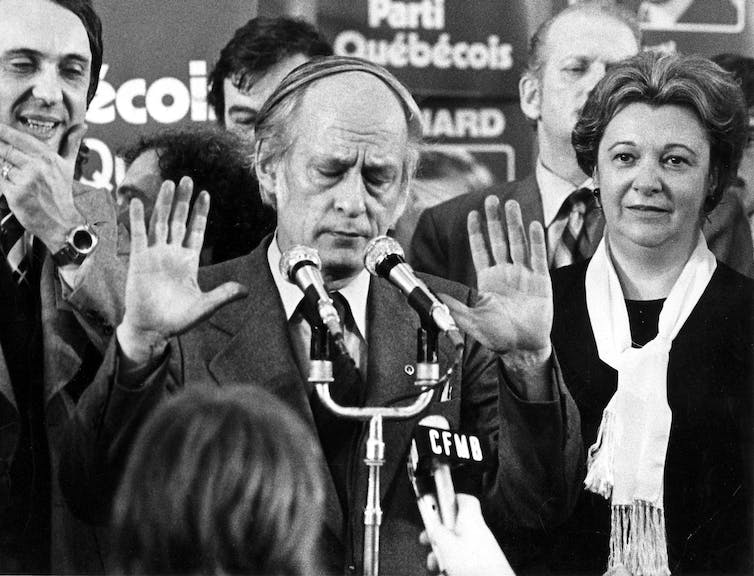 Québec Premier Réne Lévesque tries to hush supporters at a Parti Québecois rally in Montréal, Nov. 15, 1976, following his party’s victory in the provincial election. The PQ victory led to the landmark Charter of the French Language, more commonly known as Bill 101, which became law on Aug. 26, 1977. THE CANADIAN PRESS/ Files

The CAQ wants more. It wants minorities to meld in completely by losing their ostentatious religious symbols. This move capitalizes on the two previous governments attempts to foster a distinctly secular society by separating church and state.

As an Allophone (whose language at birth is neither French nor English), the CAQ’s victory signals a trenchant denial of racism for me. The CAQ’s political agenda demands that membership in Quebecois society is contingent on separating one’s identity into compartmentalized parts.

Vacillating between disallowing and conditionally allowing the wearing of the hijab and other religious symbols by public servants, CAQ continues the tradition of exclusion that is the hallmark of any nationalism — a definitive separation between those who belong and those who do not.

This desire to enfold individuals into a national collective by forcibly making them conform to norms of an “imagined community” is basic nationalism — one that pits an “us” against a constructed “them,” where the “they” represent multiple threats to the nation.

These threats include a perceived challenge to a secular nation through the donning of religious symbols and adherence to different cultural ways, as well as a sense of being engulfed by immigrants who threaten to dilute Quebéc’s distinct culture. 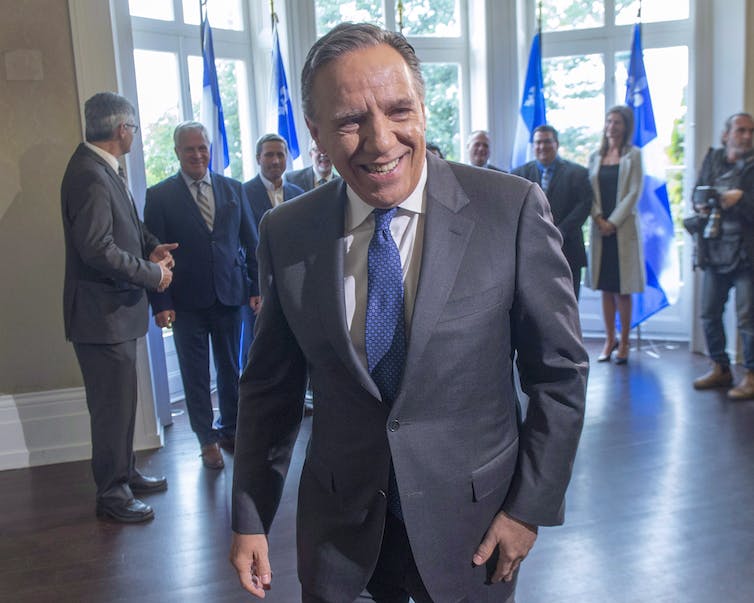 Québec Premier-designate Francois Legault leaves after speaking to the media in Québec City on Oct. 2, the day after after winning the provincial election. THE CANADIAN PRESS/Ryan Remiorz

Akin to Australia’s “paranoid nationalism,” Canadian scholar Daiva Stasiulis describes Québec’s response as that of a “worrier nation,” continually troubled and distressed about threats to its cultural distinctiveness and the status of the French as a founding nation.

Who are the intended targets of CAQ’s exclusionary ban? Muslim women are the most obvious targets but Jewish men are also included, as are Rastafarians, Sikhs or anyone that looks visibly different.

A reminder to leave part of yourself at home

Why the focus on different “others?” Such lines of demarcation have been drawn across numerous terrains — the practice is not exclusive to Québec. However, living under such conditions is a visceral reminder of how tenuous “belonging” really is for those who are on the margins of race, religion and gender. These axes of power delimit and decide the level of access that is afforded to those who are different.

But more than that, the limitations pivot on the assumption that one can separate oneself into different parts — leave the hijab at home, work as a public servant in a position of authority, and then come home and wear it in private. Identity is privatized, as is faith. Faith is fine as long as it stays at home and doesn’t impinge on the public sphere.

This kind of compartmentalization is possible in abstraction but in reality, it is another issue. It imposes unnatural parameters on self-expression and it targets particular groups of people and specific identities.

In the making of the Québec nation and identity, language was identified as the main conduit through which belonging was to be attained.

Yet, it seems that in spite of fluency in French (and, bearing in mind that most immigration to Québec is from French-speaking countries), it is clear that knowing the language is not enough. Not only does one have to speak the majority language, but one also has to be like and look like “one who belongs.” This is where the state’s imposed secularism comes in. The CAQ want to assimilate difference — make “them” like “us.”

‘Sexularism:’ They want to see the whole woman

The act of being able to see suggests a kind of visual possession, of being able to access, consume and digest difference so that it is less threatening. Québec’s secularism fits what Joan Scott has called “Sexularism.”

If those women who wear hijab refuse to unveil, shed their chadors, then what happens to them? They remain invisible, confined to their homes, refused work or services, and are disadvantaged, economically, socially and politically. This creates a vulnerable class of people who can then be exploited for gain — as cheap labour, and invisible “others” whose lives are not deemed worthy of societal concern and attention.

CAQ is following in the footprints laid by the Liberal government preceding it — through its adherence to Bill 62 banning ostentatious religious symbols for those in positions of power. But does that mean that those who wear these symbols will not be able to climb the social ladder – attain any positions of power?

Given how few women actually wear the chador or the niqab (the face veil), is this yet another attempt at managing dissent given that protesters often wear masks in fear of reprisal and retaliation by authorities, a move that Jean Charest, former liberal premier, tried to pass into law in Québec?

We are walking a tightrope in Québec. Allophones are caught in the interstices of power between the right of centre political party in power and the ongoing racism that remains unacknowledged by those in power.

Just as Trump has upped the ante on the acceptability of hate speech, so too has the CAQ’s insistence on passing this legislation. It has escalated the degree to which exclusion is rendered acceptable. If democracy is premised on individual rights, then clearly, Québec’s ideal of democracy has yet to be attained.

Yasmin Jiwani is a full professor in the Department of Communication Studies at Concordia University. She is also the Concordia Research Chair on Intersectionality, Violence and Resistance. She has published several books and numerous articles on race, gender, violence and media representations.