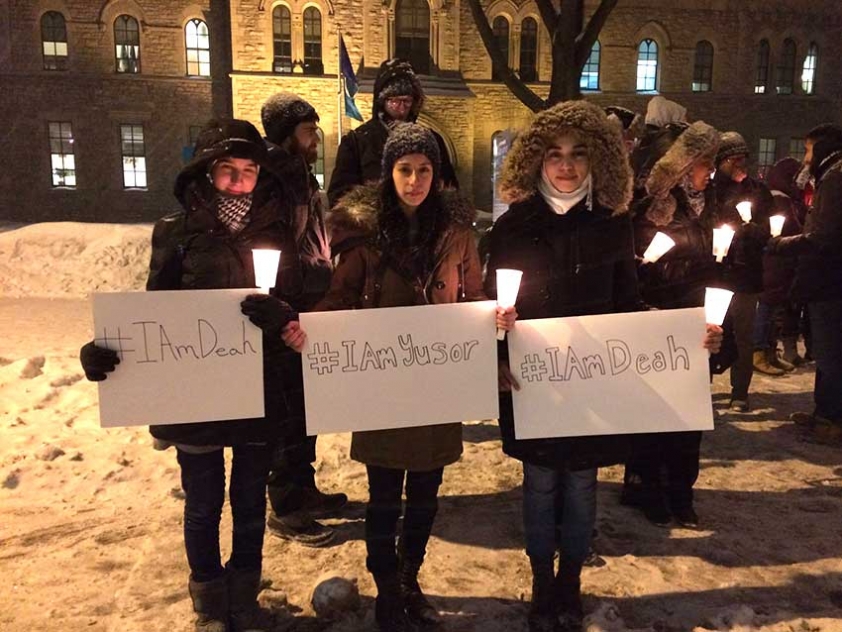 Hiba Rachid, Ruba Adas, and Marwa Halak at the February 11th vigil for the victims of the Chapel Hill Shooting. Amer Adas
12
Feb
2015

Syrian Canadian University of Ottawa student Amer Adas, 22, felt compelled to organize a vigil in Ottawa to pay respects to the dead and to bring together people who have been shaken by this tragedy. “We decided to rally people to show our solidarity with the victims’ family as well as to raise awareness through campaigning of social media,” he stated, “The poor news coverage of this tragedy prompted us to spread the news ourselves.”
The choice to gather at Canada’s Human Rights Monument at Elgin and Lisgar was a deliberate one. “We felt like the Human Rights Monument was the perfect place to hold this event because of the nature of the crime,” Adas stated, “As we think it was a hate crime against Islam. A crime against their human right to freedom of religion.”
Many of those who gathered on Feb. 11 were Syrian Canadian. Syrian American Deah Barakat was active in doing humanitarian work with Syrian Refugees, as was his wife Yusor who had volunteered with him at a dental clinic for refugees in Turkey. Deah Barakat, a dentistry student, was in the process of fundraising for a dental clinic for Syrian refugees. Before he died, he had raised $10,000 of his $20,000 goal. In the wake of his death, there is now over $200,000 which has come in as donations from around the world in honour of his memory.
Carleton University students Ruba Adas, 20, the sister of Amer Adas, and Marwa Halak, 20, came out in solidary with Syrian Americans. Both also were disappointed with the initial lack of media coverage. “As a Syrian, today I decided to come out to the vigil and spare 30 minutes of my time to represent the three Muslims that were brutally murdered,” Adas stated, “It saddens me that the media took so long to cover it, making it seem like their lives didn’t matter.”
“As a Syrian I feel the duty to represent the three victims because the media did not do enough coverage about the shooting,” stated Marwa, “And it upsets me that we as Muslims are not equal in the media’s eyes.”
Many of those in attendance were struck by how similar those murdered were to them “These were just regular students, which could have been any of my friends or my family members,” Ruba Adas stated, “It shocks me that there are people out there committing these heartless hate crimes. It shocks me that we live in a peaceful part of the world, yet these crimes are still going on. I will always be afraid that the next time I hear a hate crime toward a Muslim that it will be someone I know or have crossed path with.”
Amer Adas hopes that the vigils being planned across North America raise awareness about the possible violent consequences of Islamophobia. “I think nationally and internationally these vigils will bring to light that Muslims too are being targeted for their faith,” he stated.
Based on discussions among those in attendance, many fear that they or someone they know could be the next target of a hate crime. “Although we know in the U.S. that hate crimes may be more, many [at the vigil] felt like this could happen in Canada,” Adas said, “And some expressed their concern for Hijabi Muslim women.”
Arab Canadian University of Ottawa student Shahad Khalladi, 20, agreed that Muslims are afraid of being targeted. “The incident is the type of backlash that the Muslim community has been concerned with,” she stated, “Heightened scrutiny towards the Muslim community as a whole leads to hate crimes.”

If you wish to donate to Deah Barakat's fundraising project for dental care for Syrian refugees in Turkey run by the registered charity Syrian American Medical Society visit his YouCaring Page.