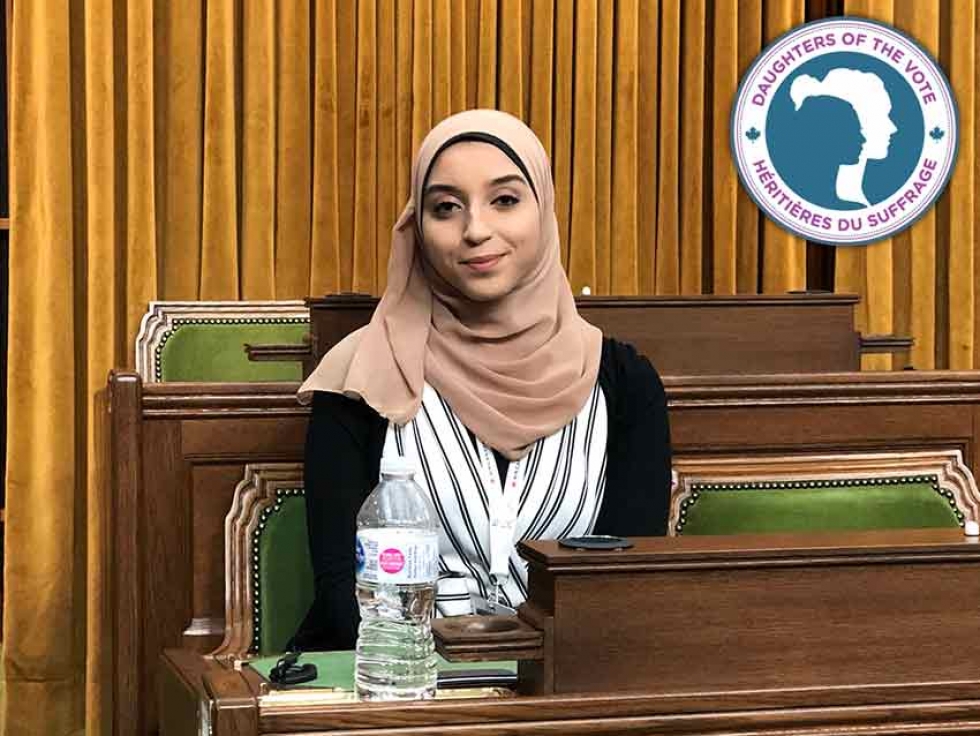 Egyptian Canadian Amira Shousha represented the riding of Edmonton West, Alberta at Equal Voice’s second Daughters of the Vote gathering in early April 2019, which brought together 338 young women between the ages of 18 and 23, representing each Canadian riding and take their seat in the House of Commons during a historic sitting of the House of Commons. They were addressed by every federal party leader, and engaged with an array of Ministers, critics and advocates.

Muslim Link had the opportunity to interview several of the young Muslim Canadian women who were selected to participate in this historic event, including Amira.

My name is Amira Shousha, I am a Canadian citizen of Egyptian decent. My family immigrated to Canada in 2009 from Dubai, UAE to pursue a better education and as such a better future. My parents are keen about expressing my religious freedom as a young Muslim woman. It’s been an honour to represent my faith in my community whether it is by being a visible Muslim woman, or at university. Currently, I’m studying a Bachelor of Science, and working as a pharmacy technician.

2. Tell us about the riding your represented in the House of Commons. What challenges socially and economically is the riding facing? Do you feel that many in Canada know about and/or understand these challenges? How do you hope to increase awareness about the challenges your riding faces to broader Canadian society?

My hope is to major in genetics and minor in nutrition. That being said, after the Daughters of the Vote conference I’m very inclined to explore options in the political world and how Muslim women would fit into the broader picture. Throughout my life, I’ve expressed a wide range of interests among many different fields anything from Molecular Biology to Policy making through the Canadian Law. My parents have ensured that I’ve always believed in my ability to be a part of society in my hijab and that although that would create barriers, it would enable me to overcome them.

3. As young women involved in politics, what challenges, if any, do you face? Do you feel that the presence of more young women is changing politics? If so, how?

The riding that I represented at the House of Commons was Edmonton West. From an economic standpoint, the province of Alberta has been greatly influenced by the drop of oil and gas prices because the province depends on the success of that industry. In my riding specifically there are many groups of people, many of them are minority groups that have been segregated into their ethnic neighborhoods.

I have faith in my generation to change the direction of politics in my riding. I hope that by representing more young Muslim women will come forward to change the narrative and continue to pave the way for other young girls across our country.

I do see the representation of Muslim women in Muslim organizations in my city and riding, my own mother being a great role model of that. But that’s not enough, even with visibly Muslim women in leadership they’re still not accepted into the political sphere like other groups are. This doesn’t really surprise me, because by accepting Muslim women wearing Hijab, they’d be breaking through glass ceilings that exist for a reason. For myself, I’ve taken on many projects and have become a Muslim woman in a position of leadership, but I want for that leadership to continue expanding. That being said, organizations that are led by women are definitely efficient and productive. It allows for the continuous progress of getting women into the public and political spheres and that is something that is worth celebrating.

DoV enabled me to learn about a lot of things in a short period of time. There were many Indigenous delegates, as well as non-binary individuals.. I learned a lot about the struggles that indigenous women face on a daily basis. I did not really get the chance to learn more about individuals that are part of the LGTBQ+ community and I think that was the case because many individuals assumed that people of faith were automatically unaccepting of them which in my case was untrue. I would’ve hoped to learn more about them.

6. As was to be expected with a federal election fast approaching, tensions between political parties were much more apparent during this DoV than back in 2017. One of the greatest challenges of our time is how societies are becoming more and more polarized. Unfortunately partisan politics plays a role in this polarizaiton as parties focus on attacking one another instead of trying to build consensus for the common good. Do you feel that there is a need for a new culture of how politics is done in Canada in order to keep our democracy healthy and focused on the interests of all Canadians?

Politics are politics, one party will always be the opposition, and another will always be attacked for the way that things are done. However, in this political climate there were many other factors that contributed to actions at the House of Commons during our visit I had the chance to sit in on Question Period and one common thread developed. The official opposition kept asking questions regarding the SNC Lavalin scandal while the majority government responded by talking about their budget and plans to address issues like climate change and healthcare.

None of the parties recognized the issues with Islamophobia and not enough emphasis was placed on addressing the problems identified by Indigenous groups. It was discouraging to recognize that the parties never spoke about  how to make our nation better but rather focused on either maintaining their seats or winning back the majority of seats. A new culture of politics must arise because right now the parties are not focused on us – the Canadian citizens - but rather on one another.

7. As it is an election year, what will you be doing to try to get out the vote in your riding?

It was an amazing feeling to be associated with other Muslim women at the conference because we all bonded instantly. It was like all these young women understood me and faced the same challenges that I did – especially those who wore the hijab. I was really glad to meet some of the girls that also came from my city because we went to the same schools and attended the same classes but did not even realize that one day we’d all meet and set history together. The entire experience was exactly everything I had hoped for and I formed so many sisterhoods across the entire country. I will be forever bonded with them despite our geographical distance.

8. What is the key lesson from your experience at DoV that you will be taking back into your work in your riding?

My work in my riding has always been focused on finding solutions to the poverty and homelessness that our fellow Canadians experience. This conference only reaffirmed the importance of these issues to me and encouraged me to continue pursing that goal.