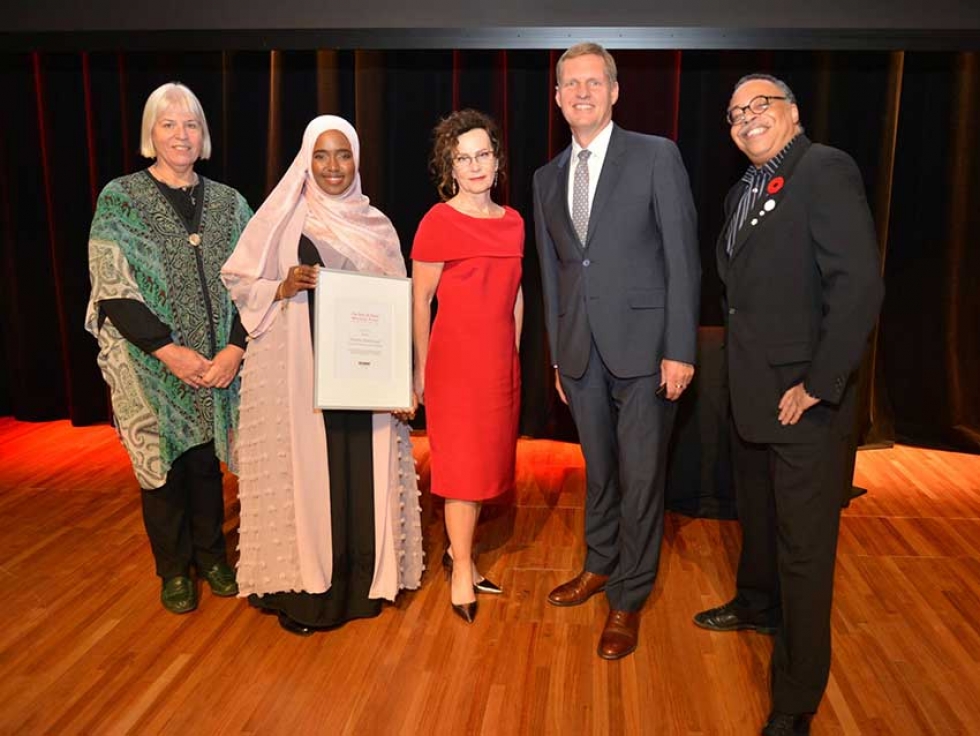 Somali Canadian Rowda Mohamud won the inaugural Ross and Davis Mitchell Prize for Faith and Writing on October 31st, as part of the Faith in 150 initiative, for her collection of poetry reflecting on her experiences of faith in Islam, racism, Islamophobia, and identity as a Muslim woman in Canada. The prize is ten thousand dollars.

Muslim Link readers may be familiar with Rowda's work from the piece we recently published, Of Bobcaygeon and Mogadishu, her tribute to the late Gord Downie, from The Tragically Hip, who passed away in October and who is one of Canada's most beloved songwriters.

When Muslim Link connected with her about her win, we learned that a highlight of the awards ceremony for Rowda was getting to meet renowned Black Nova Scotian Canadian poet and playwright George Elliott Clarke, who is currently the Canadian Parliamentary Poet Laureate. "He was every bit as warm and welcoming as you would expect," Rowda shared.

When Rowda informed her mother that she had won the 10K prize her mother's response was "'Congrats, I'm so proud of you, now you can work on winning prizes for memorizing the Quran!'. She told me she had to run because she would be late for her swim at the local pool", Rowda shared laughing, "She said I could message her the details about my win."

Rowda is quick to point out that her mother's nonchalance about her win has more to do with the fact that her mother has always recognized her talent and is just pleased that Rowda herself and the rest of the world is finally catching on to a fact she has always known. "Somali moms just expect brilliance from you because they gave birth to you and they know you."

Rowda, who works as a managment consultant and is also a mother of a young daugther, came to Ottawa with her family about 20 years ago as a refugee from Somalia. She currently lives in Oakville.

In her interview with CBC, Rowda credits her grandmother for developing her love of language. "I learned about the beauty of language, just the abilty to move people to goodness, to compassion, just with words," she shared, "She was someone who didn't actually learn to read or write until her 50s. But yet she just had this amazing connection with language. She is such an inspiration to me."

During her CBC interview, she also share the following excerpt from the winning poem, titled "Please Report Suspicious or Unusual Behaviour":

"Promise to always be aware of the hearts around you

For all hearts are constantly turning

According to the will of their Lord

And the one who hates today

Inshallah (Hopefully), with this prize, we will be seeing more writing from Rowda in the near future.

To listen to Rowda's interview with CBC Radio, click here

To read "Please Find Yourself a Space and other poems", click here