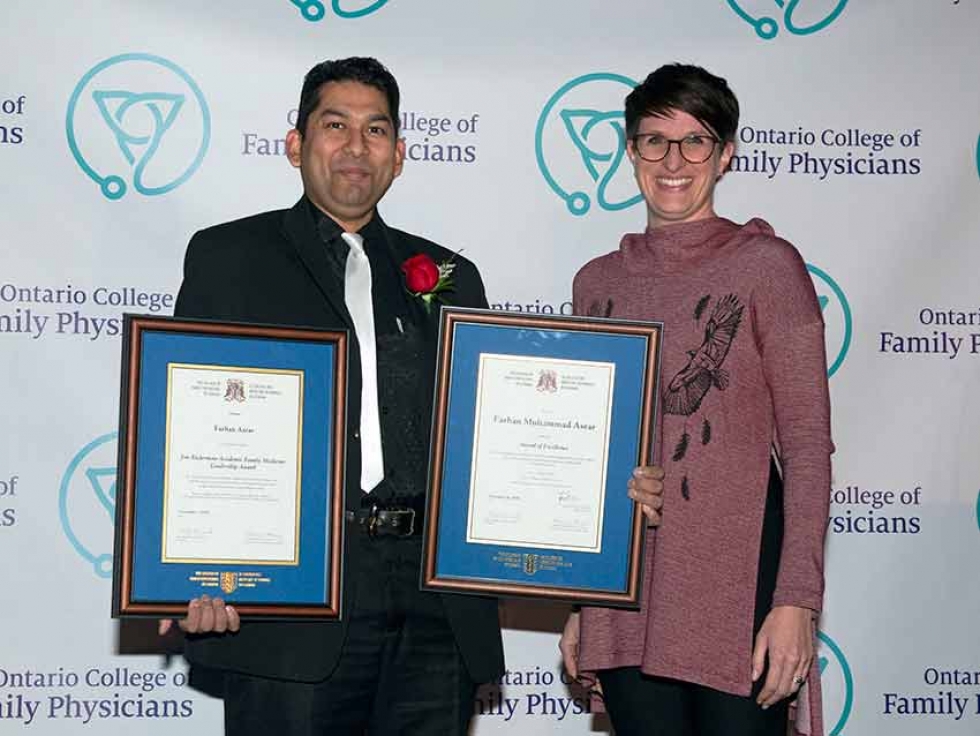 Written by  Ontario College of Family Physicians
Published in News

Dr. Farhan M. Asrar of Mississauga has been named a 2019 recipient of the Award of Excellence, presented by the Ontario College of Family Physicians (OCFP). He was also selected to receive the Jim Ruderman Academic Medicine Leadership Award.

Named in honour of Dr. Jim Ruderman, a former long-serving Chief of Family Medicine at Women’s College Hospital in Toronto, the award recognizes an outstanding Canadian family physician academic who embodies Dr. Ruderman’s qualities – wisdom, equanimity, compassion, and the capacity to attract and mentor talented individuals and turn them into a dynamic, productive team.

He received his awards at the Ontario College of Family Physicians (OCFP) Awards Ceremony on November 28, 2019 in Toronto.

Through nominations by peers or the public, the awards recognize family doctors across Canada who have demonstrated an exceptional achievement within the past 24 months pertaining to the specialty of family medicine. Nominations are submitted and adjudicated through the provincial Chapter of the College of Family Physicians of Canada, of which the nominee is a member.

“Dr. Asrar’s contributions to our body of knowledge in public health and environmental health and his numerous humanitarian efforts are having an impact on a local and international scale,” said Jennifer Young, President, Ontario College of Family Physicians. “We are fortunate to have pioneers like Dr. Asrar practicing in Ontario and the opportunity to benefit from his leadership. It is a great pleasure to acknowledge his accomplishments through this award.”

Dr. Asrar exemplifies the vital role family physicians play across Ontario as clinicians, advocates, teachers, and researchers.  Dr. Asrar’s passion for family medicine and public health has been central to his work since starting his practice in Mississauga in 2014. He has worked with renowned experts from NASA, the Canadian Space Agency and other space agencies on various international projects including an upcoming ground-breaking study focused on the effects of space on the immune system. He was appointed an adjunct faculty member at the International Space University, where he is the only practicing family physician appointed to this role.

Dr. Asrar established the Orphan Sponsorship Program – one of the most successful volunteer university student fundraising initiatives in Canada. This program enables students to take a leadership role in fundraising to support orphans in over 20 countries and has raised over $1 million to date. As a resident, while he was working at Stonechurch Clinic in Hamilton, he developed a database of bilingual clinician and staff volunteers as a resource that doctors can use with patients who do not speak English or French. He has since shared this innovative idea at national conferences to help other clinics.

“Dr. Asrar has made substantial contributions to family practice and has been recognized for his leadership. His engagement with NASA and the space program demonstrates his breadth, depth and vision as a family physician,” said Dr. Ross Upshur, professor, Department of Family and Community Medicine and Dalla Lana School of Public Health. “He has an exceptional career ahead of him. I suspect that we have only seen the tip of the iceberg of what he is capable of achieving.”

Within his first year of practice, Dr. Asrar held three faculty appointments – a significant achievement. Today he is an assistant professor at the University of Toronto and McMaster University. Dr. Asrar has won numerous accolades and was presented with the Canadian Medical Association’s Young Leaders Award in 2014 as a resident and again in 2017 as an early-career physician – the first recipient to win this award twice in two categories.

To learn more about the 2019 OCFP Awards, click here

The Ontario College of Family Physicians represents more than 13,500 family physicians across the province. We support our members by providing evidence-based education and professional development, promoting and recognizing leadership excellence in family medicine, and advocating for the vital role family physicians play in delivering the highest quality care to patients and families across Ontario.