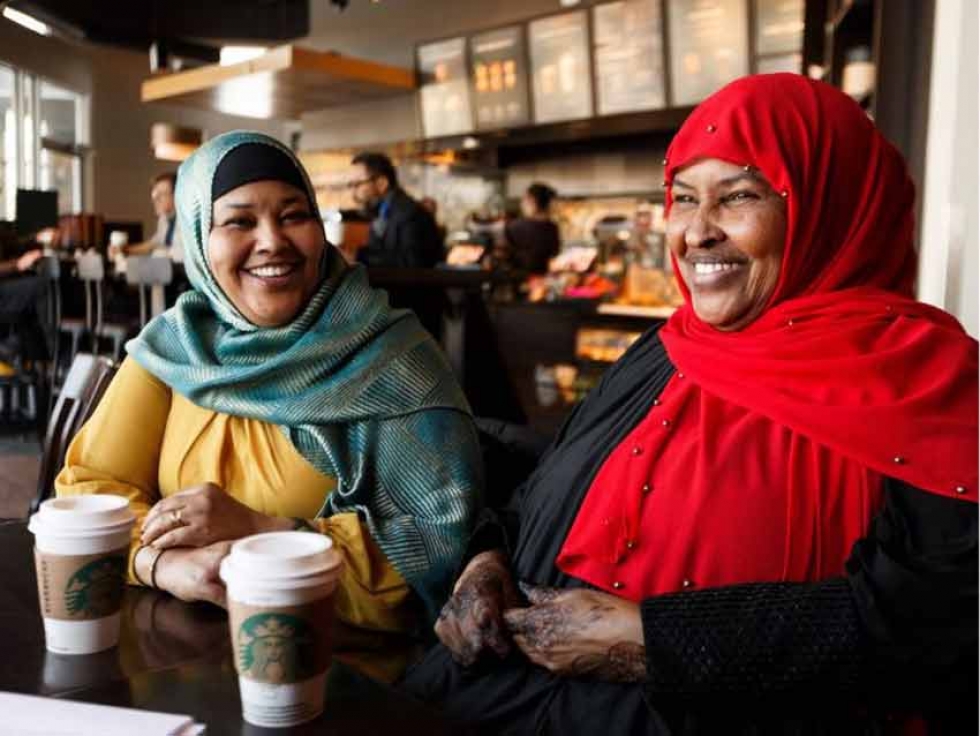 Amina Hussein, left, and Maryan Barrow in an interview at a coffee shop in Edmonton, on Friday, Feb. 8, 2019. The two mothers are part of a now year-old coalition of Somali mothers IAN KUCERAK / POSTMEDIA
03
March
2019

Meet The Hoyo Collective: Edmonton Somali Mothers Supporting One Another and Their Communities

The Hoyo Working Group, also known as the Hoyo Collective, is an Edmonton based Somali mothers group who came together with the intention to create a collective support group for mothers with common barriers and diverse talents to address their barriers through education, innovation, and capacity building.

Hoyo is a Somali word for mother but it is also an acronym standing for "Helping-Our-Youth-Organize".

According to the Group's website, "In October 2017, the Alberta Public Interest Research Group, APIRG, approved a grant that supported the Hoyo Working Group initiative to carry out their work effectively."

The Hoyo Collective was profiled by Elise Stolte for the Edmonton Journal in February. According to Journal, The Hoyo Collective is a "...group of 16 Somali mothers and grandmothers who’ve been meeting every Saturday for the last year to train with police, lawyers and others in criminal legal defence, local policing culture, restorative justice programs, health care and the school system. They’re the mother hens, the community shepherds who finally have a voice and are taking on a larger role to support long-term healing for all of their children."

Stolte stated, "[The Hoyo Collective operates] on what I think is the smallest grant I’ve ever reported on: $2,200 from the Alberta Public Interest Research Group."

Stolte interviewed Collective members Amina Hussain and Maryan Barrow. Barrow moved to Canada in 2013, a single mother with 10 children now ranging in age from 16 to 37.

According to her interview with Stolte, "Before, when her children got in trouble at school, she had to go alone, struggle to communicate and lobby for help in a system she didn’t understand.Now members of the collective go with her. Together, and with an interpreter, they can explain the history of trauma and the reality that, if this child is kicked out of school today, the odds are stacked against them. It’s the first step on a well-known path to drugs, gangs and jail."

Amina Hussein, who has five children between the ages of 16 to 24, came to Canada 24 years ago. She lost her son to gun violence in Edmonton three years ago. She explains in her interview with Stotle that "The youth are smart and motivated — they talk about wanting to get a job to buy a house for their mothers, she said. But they get frustrated. As they grow up, they find that, even with education, in Edmonton it’s often who you know, not what you know."

The Collective has also created opportunities for learning about and making recommendations to various public institutions that are impact their lives and the lives of their children, such as Edmonton Police Services, Edmonton's Mental Health Court, and Edmonton Victims Services. They are also trying to find solutions to improve the economic prosperity of Somali and other Muslim communities in Edmonton. The Hoyo Collective wants to establish a mentorship program to better connect established members of Edmonton's Somali community, particularly professionals with youth who hope to pursuing higher education. One of the other projects that The Hoyo Collective is in the early stages of exploring developing a micro-loan program that would allow Muslims in Edmonton to access startup capital without paying interest.

Dunia Nur, 29, the facilitator for the group who works in the field of social work, feels that the Collective has also personally helped her. In her interview with Stolte, "They taught me that I come from a generation that is smart, that is strong, that is powerful. They taught me my language. They taught me my food. They taught me who I am and I can never pay them back. I love them so much. I feel very protected.”