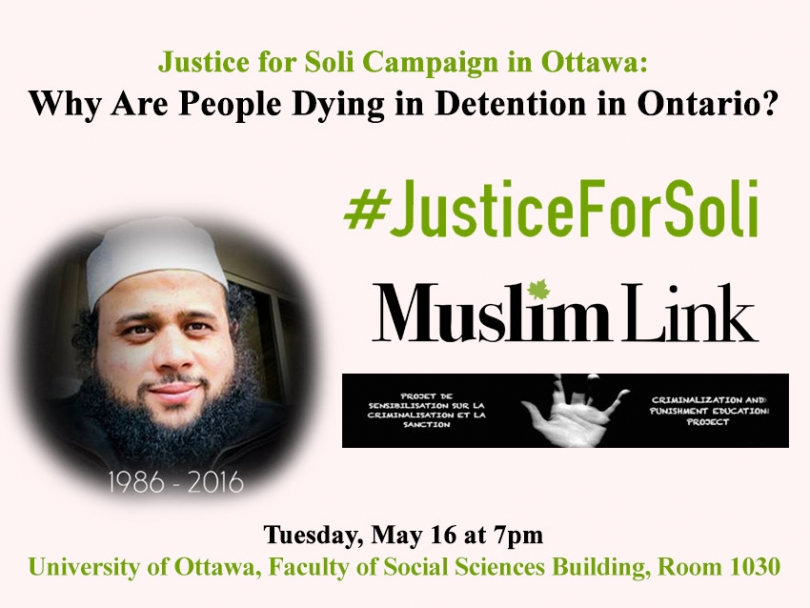 Attend Justice for Soli: Why are People Dying in Detention in Ontario? on May 16 at 7pm in Ottawa
09
May
2017

Attend Justice for Soli: Why are People Dying in Detention in Ontario? on May 16 in Ottawa

Afghan Canadian Soleiman Faqiri died in Lindsay Correctional Facility in December 2016. His family wants answers. His brother, Yusuf Faqiri, will be in Ottawa on May 16 to discuss his family's fight for justice.

The Justice For Soli in partnership with Muslim Link and the Criminalization and Punishment Education Project is hosting this event on May 16 at 7pm at the University of Ottawa aimed at engaging people in Soleiman Faqiri's family fight for justice, as well as raising awareness about the crisis within Ontario's correctional facilities, particularly in terms of the treatment of people living with mental illness.

In 2005, Soleiman Faqiri, 30, was diagnosed with schizophrenia during his first year of University at Waterloo.

On December 4, 2016, Soleiman was taken into custody at the Central East Correctional Centre in Lindsay after being charged with one count of aggravated assault, one count of assault and one count of threatening death and bodily harm. Despite multiple requests, including visits to the Centre, his family was not allowed to speak with him.

On December 12, 2016, a mental health assessment was ordered for Soleiman, according to The Ministry of the Attorney General.

On December 15, 2016, 11 days after he was taken into custody, Soleiman was dead. According to the Kawartha Lakes Police Service, Soleiman was involved in a “physical altercation with multiple correctional officers” where “use of force was applied.” This resulted in his death.

On December 19, 2016, four days after his death, the charges against him were dropped.

The Justice for Soli campaign was launched to demand answers from provincial authorities about Soleiman’s death.