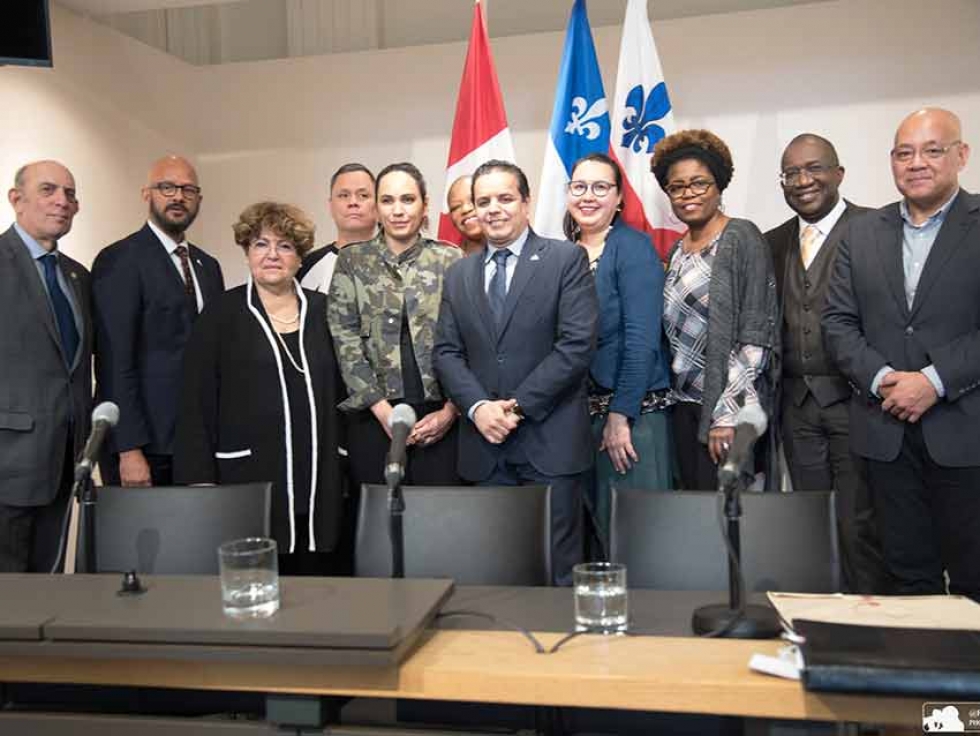 On February 4, Members of the Center for Research-Action on Race Relations (CRARR) joined City Councillors Abdelhag Sari (Marie-Clarac District) and Marvin Rotrand (Snowdon District) and other community groups such as Jamaica Association of Montreal; the Center for Justice for First Peoples and the Native Women's Shelter) to ask that Montreal police officers be equipped with body cameras. Center for Research-Action on Race Relations (CRARR)
05
February
2020

One year after the Plante administration's refusal to deploy body-worn cameras for SPVM (Service de police de la Ville de Montréal) officers, a coalition of elected municipal representatives and community groups is returning to the table to demand the rapid implementation of body cams in the police department to effectively combat racial profiling. Ensemble Montreal will table a motion to this effect at the next Municipal Council session.

"With regard to racial profiling, in the past year, there's been no improvement. On the contrary, things have gotten worse. Last October, a report on police stop-and-checks revealed that indigenous and black people are between 4 and 5 times more likely than whites to be stopped by SPVM officers. As for people of Arab origin, they are on average twice as likely to be stopped as a white person," said Mr. Abdelhaq Sari, Ensemble Montréal spokesperson for public safety.

Independent Councillor Marvin Rotrand agrees: "For years, the SPVM has been insisting that it takes racial profiling issues seriously with its action plans, policies and employee training. There's been lots of lip service, but very little concrete action. Last year, it had an opportunity to act by recommending the adoption of body-worn cameras after completing the pilot project. But it refused, claiming the costs were too high. That's truly regrettable."

The main arguments that the SPVM advanced for not recommending the use of body cams are also challenged in a new report* prepared for Mr. Rotrand. He claims the SPVM improperly assessed the costs of the project as well as the impact of body cams on public confidence.

"According to the SPVM, it would cost $17.4 million to implement the technology, and $24 million per year in staff and management costs. These costs are excessive and reflect neither reality nor the many technologies on the market. For example, they chose the most expensive technology for video data storage, while other cities are doing it for much less with other technologies," explained Mr. Rotrand.

"These cameras have proven their worth in other cities. They protect both the residents and the police. The captured video provides an additional tool to complement officers' event reports, facilitates evidence sharing with Crown prosecutors, improves public perception of the role of police, and decreases vexatious and unfounded complaints against police officers. Our motion calls on the Plante administration to review its previous decision and authorize deployment of body cameras as fast as possible", said Mr. Sari.

The motion presented by Ensemble Montréal is supported by many groups and organizations that defend the rights of Montrealers from diverse origins. Among these are the Center for Research-Action on Race Relations (CRARR), pointing out that such a motion is highly appropriate at the start of Black History Month.

"What Montrealers tell us is that the issue of racial profiling is far from being resolved. We have to put the subject of body cams back on the table. Let's not forget that the technology has greatly evolved since the pilot project ended in 2017. We are of the opinion that body cameras will protect both police and residents. It's a win-win solution," said Mr. Alain Babineau of CRARR.

Also, the Vice President and founding member of the Muslim Association of Montréal-North, Mr Abdelaziz Rzik, lent his voice to those of other agencies in favour of the motion. Mr. Rzik was notably a member of the Arab communities' SPVM oversight committee from 2008 to 2018.

"I worked for more than 10 years on relations between the Arab community and the SPVM; it's a subject that's very dear to me. My goal has always been to combat profiling and enable mutual respect between police officers and the members of my community. Real action is required to enable us to work together: they must deploy these body cameras," he said.

The motion will be debated at the February 24 session of the Municipal Council.