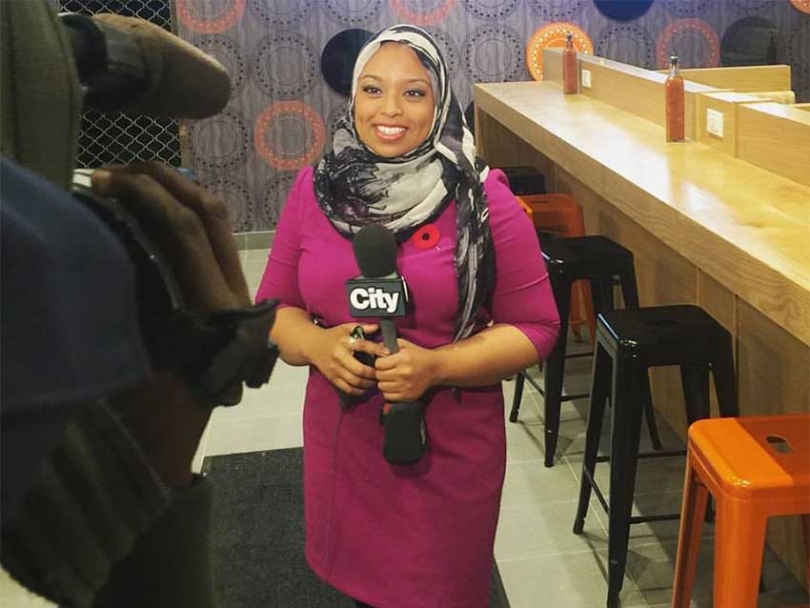 On November 18 2016, Ginella Massa was asked to sit in as news anchor on City TV, where she currently works as a reporter, thus becoming the first hijabi to anchor a newscast in Canada. Courtesy of Ginella Massa
21
November
2016

Ginella Massa has made history once again. In January 2015, she became the first hijabi TV news reporter on mainstream Canadian Television. On November 18 2016, she was asked to sit in as news anchor on City TV, where she currently works as a reporter, thus becoming the first hijabi to anchor a newscast in Canada.

Born in Panama, and raised in Toronto, her mother converted to Islam when Ginella was a child, so she was raised Muslim in the city with Canada’s largest and most diverse Muslim population.

She wanted to be a journalist from an early age. As she writes on her blog: “People have asked when I knew I wanted to be a reporter, and thinking about it, I realized it went a long way back. From a very young age I had dreamt about becoming the first hijabi reporter in Canadian broadcast media, but for a long time it was just that: a dream. I wasn’t sure it could ever be realized -- not because of my own abilities, but because I wasn’t sure someone who looked like me would be accepted on Canadian TV.”

Ginella pursued her studies in Communications and Sociology at York University. She knew she wanted to be a TV news reporter but she thought she might have to accept a life behind the camera because of her hijab. As she states in her blog, it was her mother’s encouragement that helped her to think bigger, “I set limitations for myself from early on. I remember telling my mother that I should consider going into radio, “because what you look like doesn’t matter. It’s just about your voice.” But she encouraged me to dream bigger, and that just because no one else had done it, didn’t mean it couldn’t be done.”

Ginella went on to study Broadcast Journalism at Seneca College which led to her landing an internship with a major TV news station in Toronto, and she then went on to work as a segment producer in both TV and radio.

Her first on air experience came while volunteering with Rogers Cable TV in Mississauga where she learned that “landing a paid on-air gig was hard enough when you weren’t trying to be the first woman in hijab to do it.”

Ginella faced some discouragement about pursuing her dream while working in the industry, as she shares in her blog “while working as a producer, I got into a conversation with a colleague about my Muslim friend who had just been hired as a reporter. He asked if she wore hijab, and when I said no, he mused, 'I doubt a woman in hijab would ever be hired TV. It’s just too distracting.' He wasn't aware about my own aspirations, so I just smiled and shrugged in response. Inside, I really wanted to believe he was wrong, but a small part of me wasn’t so sure.”

But Ginella soon got her big break. But it wasn’t a big city that gave her the opportunity to be Canada’s first hijabi TV news reporter. It was the small city of Kitchener, Ontario.

One might assume that a hijabi TV reporter would face problems working in a small and much less diverse city. But Ginella has stated that she actually received a lot of positive feedback from viewers. As she writes in her blog: “A few months after I was hired, I received an email from a random viewer. ‘Kitchener went from small town to big city when they hired you,” she wrote. ‘Love seeing you on the nightly newscast. Congratulations.’ Her words brought tears to my eyes. She was right; my news director had done something no one else in the country was brave enough to do: give a woman in hijab a chance. Months later, I asked my boss if he recognized the significance of what he had done by hiring me. He said he honestly didn’t realize how big of a deal it was – he just thought I would make a great reporter.”

On top of pursuing a career in journalism, Ginella has been active in trying to combat stereotypes about Muslims, particularly Muslim women who were hijab. She often speaks at Muslim community events, such as the Being Me Conference. She co-moderated Canadian Muslim Vote’s All Party Debate during last year’s Federal Election. Her connection with the Muslim community has helped to get important community stories and perspectives into mainstream media. She has also run workshops educating community members about how to engage with media.

Ginella hopes that she has helped to pave the way for other hijabi journalists in the country. As she states in her blog: “It feels really amazing to be the first hijabi reporter in Canada, but I certainly hope I'm not the last.”

To learn more about Ginella Massa, visit her website here

Binogi Gives Free Access to Its Education Platform in Languages Such as #Arabic, #Somali, #Dari & #Tigrinya for the… https://t.co/UE27...
Check Out #Toronto ONLINE Events on @Muslim_Link! https://t.co/bBpbwo1VEK PLEASE LET US KNOW ABOUT YOUR ONLINE EVE… https://t.co/vfPE1e0r...
ICNA Relief Canada contributes over $150,000 to COVID-19 efforts at Trillium Health Partners… https://t.co/X97I5MimlH...