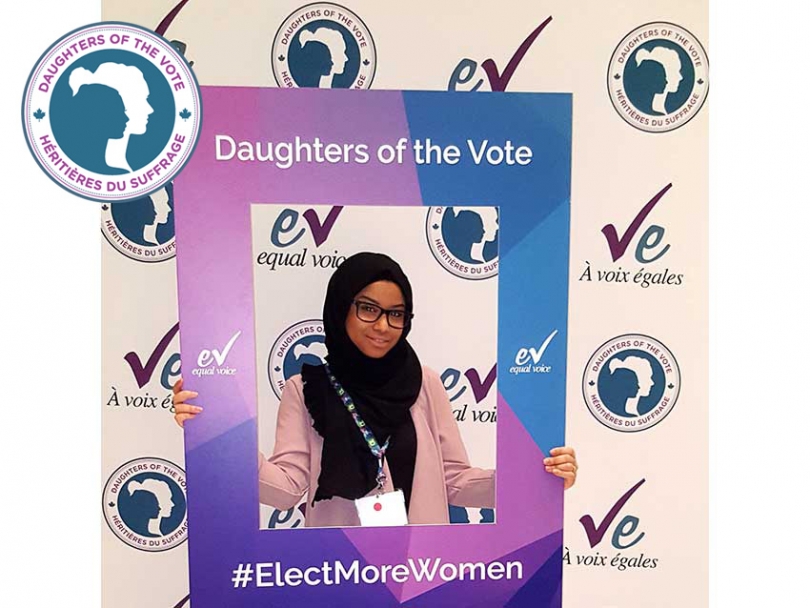 Ammani Hanafe was one of several young Muslim Canadian women who participated in Equal Voice's Daughters of the Vote gathering in March.
20
Mar
2017

Ammani Hanafe: Fighting for Justice not “Just Us”

Ammani Hanafe represented the riding of Gatineau, Quebec at Equal Voice’s Daughters of the Vote gathering in March, which brought together 338 young women between the ages of 18 and 23, representing each Canadian riding. Muslim Link had the opportunity to interview several of the young Muslim Canadian women who were selected to participate in this historic event, including Ammani.

Coinciding with International Women’s Day on March 8, Daughters of the Vote was aimed at encouraging more young women to become involved in Canadian politics, a space where there are still challenges to gender equity. The young women spent a week in Ottawa on Parliament Hill where they had the opportunity to meet the Prime Minister, past and present Members of Parliament, and women leaders in the fields of politics, law, and technology.

Ammani Hanafe is a Psychology student attending the University of Ottawa. Her diverse Afro-Arab ethnic background has always encouraged and fostered her strong interest in building connections with peoples from various cultures and beliefs. She is passionate about her involvement with a diverse amount of youth outreach organizations, including the Royal Commonwealth Society of Canada, where she has participated in educating youth nationally about Canada and the Commonwealth.

What was it like to represent Gatineau at this event?

I have grown up for the majority of my life in Gatineau. Regardless of my ethno-cultural background, I consider myself a Quebecois, and this is my home.

Being able to represent my riding of Gatineau, along with 337 other inspiring women from all over Canada has been an empowering experience. Not only as a visible minority but as a Muslim woman who has chosen to dawn hijab. Society has misconceptions built around my entire aura. However, our greatest resource in this country is its people. Everyone deserves to choose how they self-identify, and contribute to society.

This year, and for the past several years, Muslim communities in Quebec have faced various adversities. Despite this, there has always been an enormous outpouring of voices among non-Muslims that fight against the marginalization for every person. In extreme circumstances, we find strength and solidarity with others. It is those voices that push me to fight for justice not "JUST for US," but for everyone.

The days before the Daughters of the Vote provincial event which was held at the Quebec Nationale Assemble, brought high nerves, and fear from family members for my safety, especially after the Quebec mosque terrorist hate crime. However, what this event has given me is the strength to stand up against injustice. Regardless if people don't agree with you, silence isn't an option, silence can be just as bad as approval.

To represent my riding, and my province in the national event in Ottawa, with this new generation of diverse young Canadian women, a generation of coexistence, has allowed me to capture and be part of a beautiful moment in Canadian history.

As a veiled Muslim, amongst my other sisters, I was so happy to be able to open a dialogue with not only the delegates, but various members of parliament, senators, and active members of our community. To discuss together our ideas, struggles and experiences as a diverse panel have personally allowed me to convey various concerns, whether it be mental health rights, immigrant women's rights, issues of Islamophobia,  indigenous rights, or the rights of la Francophonie (French speakers), and much more.

Uniquely, as a Quebec delegate, I cannot ignore, that French, the language and culture, is part of our Canadian mosaic. Growing up in a majority French environment has allowed me to understand how important it is to our Canadian identity. It is quilted inside our diversity, and it serves as our duty to maintain it.

Sitting in the House of Commons, to represent such voices within my riding, and all communities across Canada, has allowed me to fight against all stereotypes and expectations.

Being a veiled Muslim woman representing my riding in Parliament, sitting in the seat for my riding in the House of Commons on March 9, is unheard of in Canadian history. Taking my seat beside women of indigenous heritage, women of colour, first generation Canadians, Francophones, and persons living with disabilities, has proven that we do have a bond that has allowed us to transcend all limitations attempted to undermine our voices.  For many of us, our presence in the House of Commons is a first in all of Canadian history, whether it be to serve as a first female in that seat, as an Indigenous voice, as a person with a disability, as a Muslim representative. The list goes on. This milestone for many of us will change the face of Parliament forever.

What were some highlights for you from the event?

One of the most beautiful and powerful moments during this event was definitely when we took our seats in the House of Commons. That moment, exemplified not only women are influential leaders, but that our messages are conveyed with true emotions.

During the conference, speakers highlighted how women are consistently labeled as too emotional for politics. However, that day I recognized that it is our emotions that empower and hold us together. Empathy is a quality needed for leadership. Our insight, passion, and concerns are valid. For every voice that spoke that day in the House of Commons, we did not fail to offer the utmost respect, support, and solidarity. That day did not only allow us to feel spiritually uplifted, but physically able to stand and cheer on every voice in the room, with firm fists of solidarity, patience, and understanding.

How would you like to see the voices of young Muslim women leaders better incorporated into both Canadian life but also Muslim Canadian life (i.e. Muslim organizations, mosques, etc.).?

The women who I have grown up around have raised me with the stories and lessons of the oum al mumineen (mothers of the believers). As Muslim women, we are guided by fundamental aspects of our deen (faith) and unique cultures.

However, deriving the rights Islam gave us is vital to understanding what strengthens us in a world that is progressively evolving when it comes to women's rights. We need to understand, that we are not looking for moderation, but that Islam is a moderate religion.

In Canada, we are grateful enough to come from different backgrounds, with different stories and experiences, and to have the opportunity to hear from one another. However, this requires the joined support of all women and men in our communities. If we want to talk about feminism than we need to speak about women's inequality and women's empowerment in the Muslim community.  The stories of women in Islamic history is a vital contribution and necessity needed in educating our children and encouraging young Muslim women's voices. Having these discussions in our communities are important, as they remind us of the greatest qualities our faith instills such as justice, solidarity, and inclusivity.

Throughout the conference, there was one statement often made: “Ask a woman to run in politics, she'll hesitate, but ask a man, and he'll say when." This is a result of a systematic issue that resides in our society. I believe that to change this; we need to start locally. We must ensure that the institutions that we create reflect inclusivity and being mindful of those missing around the table. Do we engage in our communities to find the voices of people who are not being heard?

Our initiatives and institutions need to advocate for campaigns that encourage self-worth, dignity, respect and inclusion. Being at the forefront as a woman challenges the narratives that we have been associated with. Challenging ourselves and our individual roles in society, and against injustices, requires sincerity, and patience.

Follow your quest, by being involved in various youth empowerment initiatives, especially within the diverse Muslim community which would greatly benefit and strengthen our voices. Additionally, leadership workshops and activities for the youth would promote female youth from diverse fields and interests to engage politically in the larger society.

Ammani Hanafe is a Psychology student attending the University of Ottawa. Her diverse Afro-Arab ethnic background has always encouraged and fostered her strong interest in building connections with peoples from various cultures and beliefs.