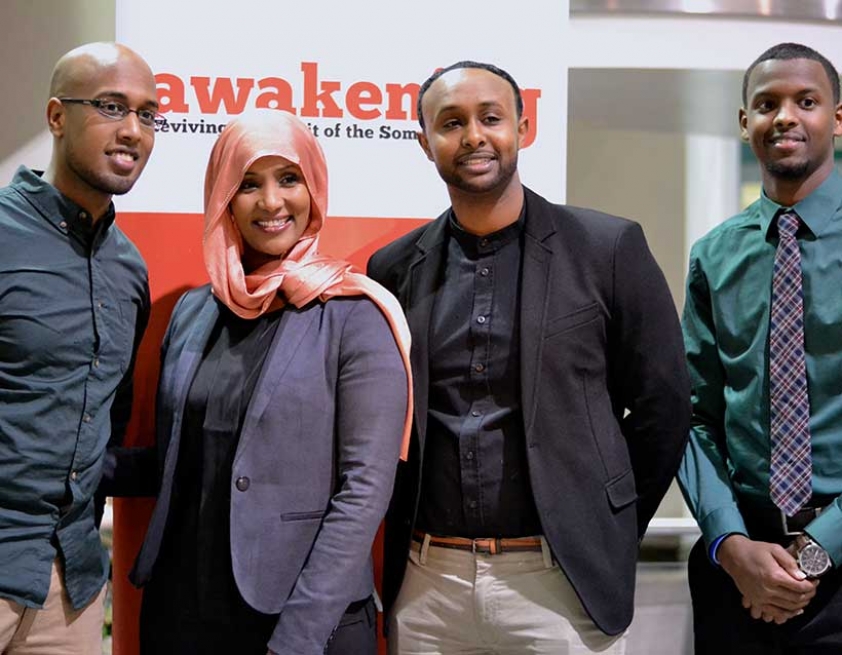 Awakening the Spirit of Somali Youth 2015

This year's Awakening: Reviving the Spirit of Somali Youth focused on Education.

Each year a group of young Somali professionals comes together to organize a conference exploring a social issue facing Ottawa's Somali community. Awakening: Reviving the Spirit of Somali Youth provides a unique opportunity for intergenerational dialogue and learning within the Somali community as elders, young professionals, and youth come together to discuss the challenges facing their community.

Last year Muslim Link interviewed Ayan Yusuf, who spoke about living with schizophrenia at the 2014 Awakening Conference which focused on mental health. This year, Awakening focused on the challenges Somali children and youth are facing in getting access to a quality education in Ottawa.

Although it may come as a surprise to many readers, not everyone has access to the same quality of education in this city. A lot depends on where you live. Like many refugees, the Somali community is still coping with the legacy of upheaval from fleeing Somalia's civil war in the 90s and coming to Canada. Although most of the Somali refugees who settle in Canada came from middle to upper class backgrounds in Somalia, they found themselves struggling with poverty in Canada and often living in neighbourhoods where the local schools continuing score low on standardized testing in Ontario. On the conference's Facebook Page it states that "A recent study released by the Toronto District School Board has identified that “25 per cent of Canadian youth of Somali descent drop out of school, 31 per cent were taking courses in applied streams, and 58 per cent of males had been suspended at least once — all higher percentages than the general student body”. Although the same study was not conducted by the Ottawa-Carleton District School Board members of the Somali-Canadian community in Ottawa have a raised a number of issues regarding suspensions, and low attainment of Somali-Canadian youth in priority schools (schools in low-income areas). Our objective is to raise awareness about the challenges Somali-Canadian youth face in the education system, and to share best practices from parents and professionals working in the education system."

Since their arrival, Somali parents and community activists have been trying to address the challenge that a lack of quality education presents to them by creating homework clubs in their neighbourhoods, which would eventually grow into stable programing for all children in their areas. They have also advocate for special programs to help newcomer parents navigate the school system, such as the Multicultural Liaison Officer program which now benefits thousands of students in Ottawa from a variety of origins.

The Somali community has played a major leadership role in trying to improve the access to quality education for low-income newcomer families. However, this is a systemic issue. The impact of lack of access to quality education can be seen in generational poverty, dropping out of high school, and unfortunately pursuing illegal activity, such as drug-dealing in order to make a living.

At this year's Awakening Conference, participants heard from Somali community builders of all ages who are working to understand and address the issue of poor school performance among some Somali youth, and the systemic barriers within Ontario's educatonal system which contributing to cycles of poverty within the community. Speakers included:

Sharmaarke Abdullahi, who used to work at the coordinator of the Somali Youth Support Project at Pinecrest Queensway Community Health Centre in Ottawa's West End, and who is now a Business Consultant with Crime Prevention Ottawa, looking at ways to address youth crime in Ottawa through prevention and rehabilitation.

Idil Abdulkadir, a Mathematics teacher at Woodroffe High School in Ottawa's West End. Idil spoke to CBC Radio's All In A Day about the challenges she sees her students facing. At the event, she discussed how students often exceptional students will succeed despite the odds but that focus needs to be put on average students who in often in higher-income communities have good chances of succeeding in school because of the supports available, but in low-income communities those supports and networks are not there. She also emphasized the important of strong literacy skills for students. The Somali Youth Support Project includes literacy programming and now the Somali Centre for Family Services is developing a literacy program for the diversity of youth it serves.

Academic Filsan Hujaleh discussed her research into educational attainment of Black children of immigrant parents. Based on her findings, she explained that there are systemic barriers within the Ontario education system that are contributing to the underperforming of Black students.

Faiza Hassan, a law student at the University of Ottawa, shared advice to youth about professionalism in the workplace and the need to find mentors from a diversity of communities as young Somali professionals will often face the challenge of being the only person from their ethnicity, race, and religion in a given workplace. She also discussed the harsh reality of racism and Islamophobia within workplaces. Readers may be familiar with Faiza Hassan who shared her advice about navigating law school in an article for Muslim Link.

Sheikh Said Ali gave a presentation on outlining the statistics of comparatively poor academic performance among Somali students in Ontario. He also demonstrated the connection between low parental incomes and low EQAO results in Ottawa schools. Ali has been a long time advocate for the Somali community in terms of navigating Ottawa's school system in order to ensure that their children get a quality education. His passion for this issue has been passed down to his son, Abdulgadir Ahmed, who became a Student Trustee on the Ottawa-Carleton District School Board. You can read about Ahmed's experience as a trustee in his interview with Muslim Link.

Ifrah Hassan was one of the key organizers of Awakening and has herself worked to support Somali students, co-founding the innovative Somali Youth Mentorship Program which as profiled in Muslim Link.

Saadia Nuh was honoured for her years of service to Ottawa's Somali community through her work as a Multicultural Liaison Officer (MLO) with the Ottawa Community Immigrant Services Organization (OCISO). She currently works at Woodroffe High School where, as a fluent Arabic speaker, she is supporting students from Iraq, Kuwait, and Syria, along with newcomers from Burma, the Democratic Republic of Congo, and South Sudan. Many of these students are facing similar challenges that the Somali community faced when most came to Ottawa as refugees in the 90s.

An number of innovative programs aimed at supporting low-income youth as they navigate high school and even post-secondary education were discussed at the conference including Pathways to Education, which provides tutoring, mentorship, advocacy, and financial supports for low-income high school students in certain areas of Ottawa and has dramatically increased the graduation rates in these communities. There is also the Youth Futures Program at the University of Ottawa aimed at supporting university students who come from low-income background and are often the first in their family to attend a Canadian university. The Youth Futures Program has been profiled in Muslim Link.

The event's keynote speaker was Hodan Nayaleh, the Founder, Executive Producer, and Host of Integration TV, an innovative Somali Canadian talk show aired weekly on City TV in Toronto and available on YouTube. On the show, social issues facing the community are explored in depth with experts from the community weighing in.

The event also included spoken word by Carleton University student Ikram Hussein whose poetry explored the the sometimes challenging relationships between second-generation Somali youth and their parents. Awakening is a forum for frank intergenerational dialogue where youth have an opportunity to speak their truth to their elders and vice versa and the young community builders get a chance to share their wisdom and experience to address current challenges facing the community. Other Muslim ethno-cultural communities could learn from this model when engaging in youth work as learning must be an exchange across generations.