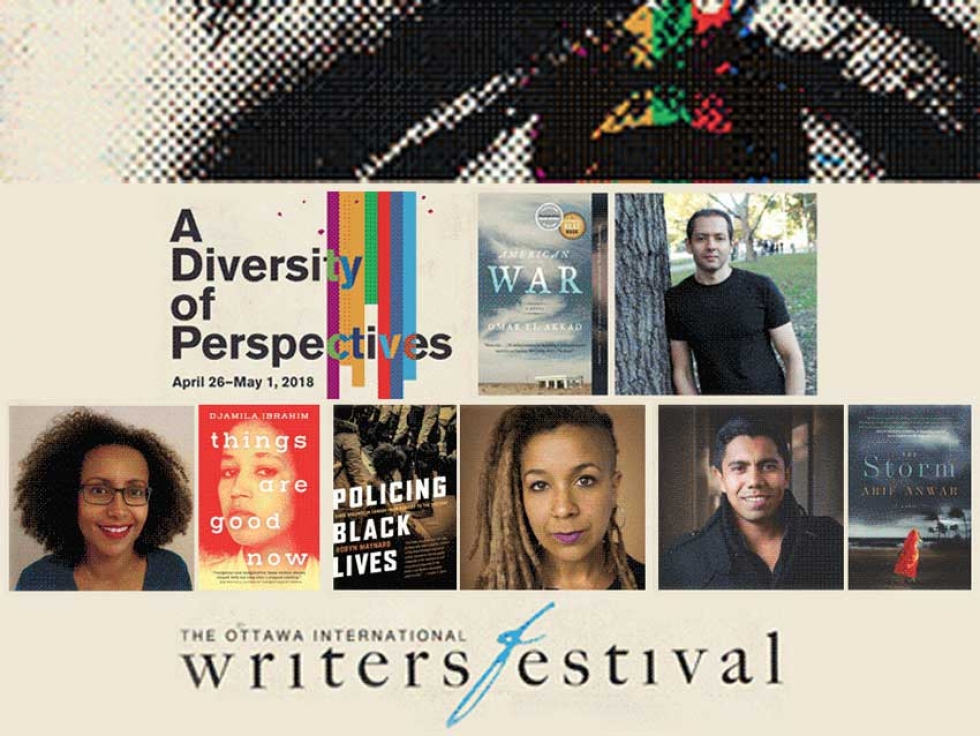 Authors to Check Out At The Ottawa International Writers Festival

Muslim Link would like to highlight some authors we think are exploring issues that are relevant to Muslims in Canada, particularly Muslims in Ottawa-Gatineau.

Omar El Akkad is an Egyptian Canadian journalist and novelist. In a ten-year career as a reporter, he covered stories across the planet — from the war in Afghanistan to the military trials in Guantanamo Bay, the Arab Spring revolutions in the Middle East and the protests in Ferguson, Missouri.

Omar is a recipient of the National Newspaper Award for investigative reporting for his coverage of the “Toronto 18” terrorism arrests. He has also won the Edward Goff Penny Memorial Prize for young Canadian journalists, and has been nominated for several National Magazine Awards. He is a graduate of Queen's University.

On April 27, he will be discussing his novel, American War, "a story that asks what might happen if America were to turn its most devastating policies and deadly weapons upon itself." Set in 2074 America, we see Americans going through many of the natural and man-made disasters that are currently being experiences by people in South Asia, the Middle East, and Africa.

Djamila Ibrahim was born in Addis Ababa, Ethiopia, and moved to Canada in 1990 and grew up in Ottawa.

On April 28, she will discuss her short story collection 'Things are Good Now." "Set in East Africa, the Middle East, Canada, and the U.S., the stories in Djamila Ibrahim’s Things Are Good Now examine the weight of the migrant experience on the human psyche. In these pages, women, men, and children who’ve crossed continents in search of a better life find themselves struggling with the chaos of displacement and the religious and cultural clashes they face in their new homes. The collection is about remorse and the power of memory, about the hardships of a post-9/11 reality that labels many as suspicious or dangerous because of their names or skin colour alone, but it’s also about hope and friendship and the intricacies of human relationships." (Source OIWF)

Arif Anwar is a Banglaeshi Canadian novelist. Hewas born in Chittagong, Bangladesh, just miles from the Bay of Bengal. He has worked on issues of poverty alleviation for BRAC, one of the world’s largest non-governmental organizations, and on public health for UNICEF Myanmar. Arif has a PhD in Education from the University of Toronto.

On April 28, he will be dicussing his novel, 'The Storm'. "The Storm seamlessly interweaves five love stories that, together, chronicle sixty years of Bangladeshi history." (Source: OIWF)

Robyn Maynard is an author, community organizer and educator based in Montréal. On April 28, she will be discussing her book 'Policing Black Lives: State Violence in Canada from Slavery to the Present'. For those interested in gaining a better understanding of the history and current realities of anti-Black racism in Ottawa and Canada, this is an important book to read and author to follow.

Wrote an op-ed in the Washington Post re: policing black lives in Canada, pointing to many new studies that weren’t out yet before my book was in print. This link is accessible (last one was subscription only) https://t.co/Qjpsd5KhnZ— Robyn Maynard (@policingblack) April 24, 2018

To learn about all of the events that are part of the Ottawa International Writers Festival's "A Diversity of Perspectives", click here