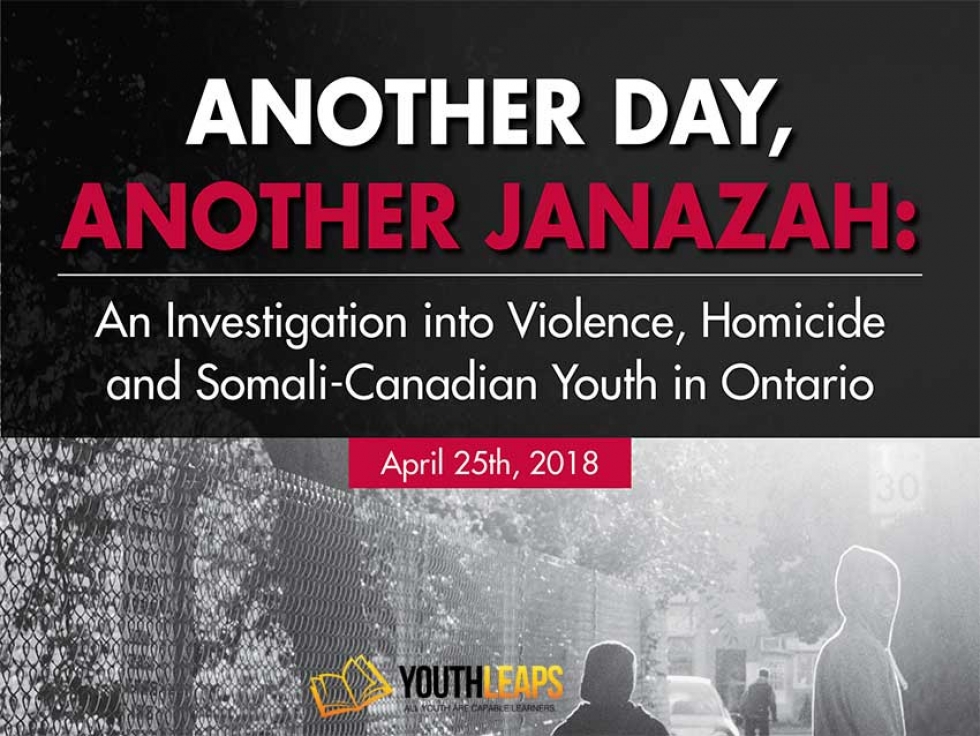 On April 25, four young Somali Canadian researchers launched the report "Another Day, Another Janazah", about the disproportionately high homicide rates among young Somali men in Ontario.

As Youth LEAPS Executive Director Liban Abokar, states "I'm moved by the attendance here today. For those policy makers in the room, I ask you to look around, the attendance today signals that the issue we are here to discuss is not one that has defeated us, but one that has actually galvanized us to action."

You can watch the livestream of the launch here:

The report is the first phase of the Somali Youth Research Initiative spearheaded by Youth LEAPS, a non-profit organization with a mission to address chronic barriers and systemic challenges facing Black, African-Diasporic and otherwise racialized youth in Toronto in order to improve their educational and employment outcomes . According to the report, "The Somali Youth Research Initiative is a response to a call for action from Somali-Canadian families and communities in Ontario who are continuing to lose their young men at an alarming rate to gun violence and homicide."

The initiative also directly engaged local Somali communities in cities like Toronto and Ottawa by running focus groups in partnership with Somali youth programs, mosques such as Abu Huraira Centre in Toronto, and social service agencies such as the Somali Centre for Family Services in Ottawa and Taibu Community Health Centre in Toronto.

From the Report's Executive Summary:

"The researchers used a mixed methods approach, including (1) creating a demographic profile of the Somali community in Canada, (2) conducting an academic literature review of the seeds of marginalization and violence in Somali-Canadian communities, (3) undertaking a survey of police records and other sources, including media scans and community consultations, to create a first-ever Somali Homicide Database (for Toronto), (4) undertaking a provincial survey of young Somali-Canadians and (5) holding focus groups to explore the issues in greater depth (held in Toronto, Ottawa, and Kitchener-Waterloo)."

Among the report’s key findings are the evidence of disproportionality with respect to the number of homicides and the size of the Somali-Canadian population. (Disproportionality is the extent to which a specific population is over- or under-represented within a certain phenomenon – for example, this study reveals disproportionately more homicides among ethnic Somali-Canadians in Toronto, compared to all reported homicides in Toronto, from 2004 to 2014.) Other findings underscore the negative and spiraling impact that this level of violence is having on families and communities who continue to struggle with issues of poverty, racism, Islamophobia and marginalization. Alarmingly, homicide rates among Somali-Canadian men continue to increase, while victims are getting younger and unsolved homicides are on the rise."

ICYMI: CBC News put together a timeline of the Somali men in Toronto whose lives have been claimed by homicide since 2004, based on new research by Toronto non-profit @YouthLeaps. https://t.co/6YtTj9JzND https://t.co/QR2PMgF8k1— Shanifa Nasser (@shanifanasser) April 26, 2018

Findings from the Report:

"The experience of Somali youth is further compounded by identity challenges. Somali youth are equally Black, Muslim, and Somali, a reality that creates a real challenge impacting their connectedness to their communities and other indicators like employment. In many cases, as we have seen recently, Somali youth continue to be prevented from entering the job market because of their identity and the neighbourhoods they reside in – all contributing to their sense of personal belonging. The discrimination they face, together with high drop-out rates creates a situation in which Somali youth are forced into precarious jobs both within the formal and informal labour market. Oftentimes the jobs that are available are low-skilled, low-wage, and unstable." (p. 27)

Packed house at @DanielsSpectrum for the #AnotherDayAnotherJanazah report launch. Glad to have been apart of this wonderful research initiative on homicides in the Somali-Canadian community. Research that stressed the importance of data and community to solve social problems. /1 pic.twitter.com/xweSApYEhu— Abdiasis Issa (@AbdiasisIssa) April 25, 2018

"According to our focus groups, participants were underwhelmed by the impact of religious institutions on preventing youth violence as mosques were seen as excluding certain populations, including young Black men either through implicit or explicit means. However as our data shows,36 for some respondents (29.8%), mosques may be a positive site of intervention, as are households (28.07%) compared to the police/ courts which 62.05% of respondents cite as having the least positive impact on homicide reduction. This illustrates that Somali youth still feel very connected to their neighbourhood institutions/social spaces despite acknowledging the problems that persist and negatively impact belonging. Masjids/mosques that cater to a significant Somali population may be seen as potential sites for positive engagement after a homicide occurs. Indeed, this trend of focusing on Somali-led spaces continued when asked about which members of the community were the most responsible stakeholders with respect to taking action against youth violence.37 Survey respondents first looked inward and expanded their expectations outward citing youth themselves (45.76%), followed by community leaders and family members (39.66% and 37.93%, respectively), educators (31.03%) and police as (17.54%) as the most important stakeholders." (p. 28)

Some recommendations from the Report:

Congratulations Liban Abokor and all of the young scholars @youthleaps on the release of "Another Day, Another Janazah." Honoured to speak at yesterday's release. We'll continue to work with you to ensure #Somali youth are given every opportunity to succeed. pic.twitter.com/TG2QUo9ZTt— Michael Coteau, MPP (@coteau) April 26, 2018