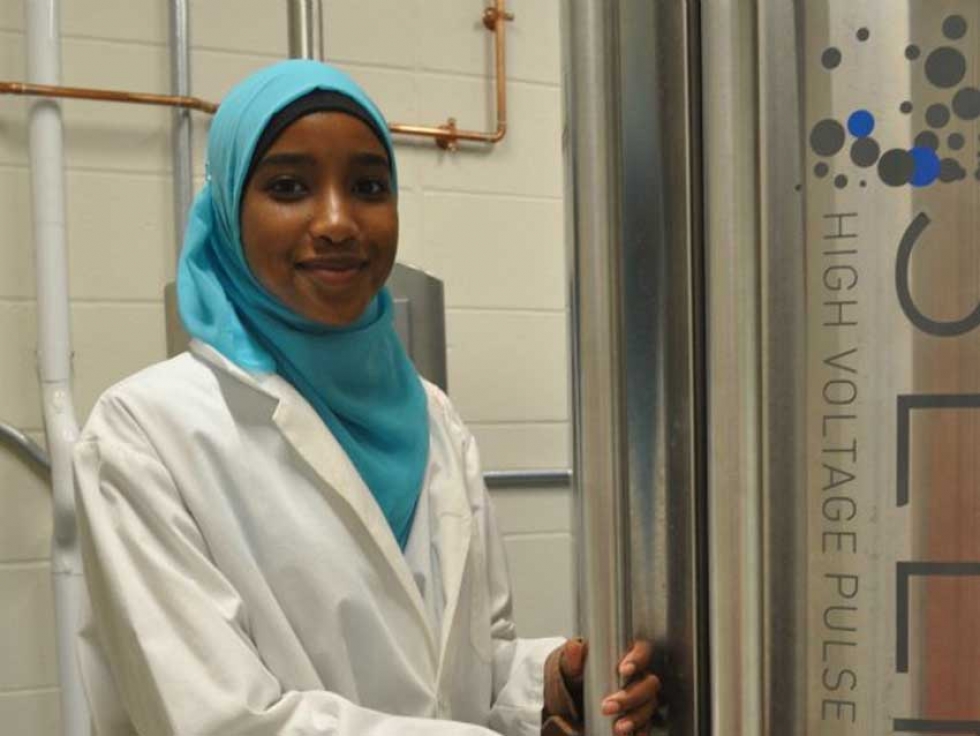 Hamdi Ali is pictured here with the Isomass SELFRAG machine she used to make the discovery. WISEST
28
December
2018

A high school student from Edmonton is making headlines because of research she conducted at the University of Alberta as part of the WISEST, the Women in Scholarship, Engineering, Science, and Technology Summer Research Program. WISEST aims to empower women and other underrepresented groups in science.

Programs like WISEST are is part of the University of Alberta Faculty of Science's committment to diversity. As stated on the U of A Faculty of Science website, "The Faculty of Science is working to counteract factors contributing to the under-representation of women and marginalized groups within the fields of Science, Technology, Engineering, and Mathematics (STEM) and to foster more diverse, representative science."

In the summer of 2018, WISEST brought 37 high school students to the U of A campus to conduct paid research.

17 year old Hamdi Ali was one of those students.

In her interview with CTV Edmonton, Hamdi admitted that before the program, "“I didn’t really know anything about geology."

In her interview with CBC Radio, Hamdi explained that she chose the field of geology so she would have a better chance of getting accepted into the WISEST Program. But she does have a rock collection.

In an interview with the University of Alberta Faculty of Science, Hamdi stated "“The program seemed like a great opportunity to broaden my understanding of what a career in science could look like."

Working with the SELFRAG Machine

During her placement, Hamdi worked under the supervision of Graham Pearson, professor in the Department of Earth and Atmospheric Sciences, Henry Marshall Tory Chair, and Canada Excellence Research Chair Laureate and graduate student Margo Regier.

Hamdi conducted research with the SELFRAG machine. What is the SELFRAG? According to Hamdi, it's "a high-voltage electronic disaggregation device, which sounds pretty fancy, but it just means that it destroys rocks using 200,000 volts of electricity."

According to Regier in her interview with CBC Radio, the SELFRAG is a relatively recent product and the machince at the University of Alberta is actually a demo from the company and the university has been tasked to test it out to see what it can accomplish.

The University of Alberta Faculty of Science article about Hamdi best explains just what she discovered with her research using the SELFRAG:

'Diamonds are usually extracted by crushing rock samples and sifting through the resulting debris. Ali’s research was to explore how a new tool, called a SELFRAG lab system, could help electrically separate the diamonds and—the team hoped—allow them to be recovered with slightly less damage than can occur in the traditional crushing method.

The results were even more dramatic and were clear even in the first test. 'The first experiment that Hamdi made with the SELFRAG machine was astonishing,' said Pearson, renowned the world over for his boundary pushing discoveries of super-deep diamonds and water in Earth’s mantle.

Ali’s task was to record the quality and number of diamonds in different samples, half of which were processed traditionally and half run through the new machine.

'When Hamdi told me that she was unable to find any diamonds in the mechanically-separated material, I was surprised and double-checked her result myself,' said Regier.

Sure enough, not only was the traditionally-processed half devoid of diamonds, when Ali searched the half that had been separated using the SELFRAG machine, she found seven perfectly-formed undamaged diamonds, showing the new method had not only left the diamonds in better quality, but could be used to find them even more reliably.

'Maximizing diamond recovery is essential for producing a responsible and sustainable mine,” said Regier. “We realized that this was an important result that could have large impacts for industry.'"

According to this article by the University of Alberta Faculty of Science, "Even the manufacturers of the SELFRAG machine were unaware of this potential application of the equipment."

Presentating to Leaders in the Diamond Industry

Hamdi had the opportunity to present her findings to leaders in the diamond industry, De Beers Group Exploration employees who were visiting the U of A campus as part of the company’s continued support for the university’s diverse diamond research projects.

In November, Hamdi was able to accompany her supervisors Graham Pearson and Margo Regier to the Yellowknife Geoscience Forum in the Northwest Terriorties, a Canadian region that is highly dependent on mining and the diamond industry.

At the forum, Hamdi presented to industry leaders about her findings.

In her interview with CTV Edmonton, Hamdi stated "I actually presented in a theatre with a lot of people there,” Ali said. “I was nervous but it was a pretty great experience.”

In her interview with CBC Radio, she stated that "I was smiling the whole time. I didn't really expect [industry leaders] to take an interest in it [her findings] but when they did that was pretty awesome."

According to Regier, “The conference went really well. Hamdi stood on stage in front of about forty people and delivered an informed presentation very confidently. I saw someone approach Hamdi afterwards to say that hers was the best talk of the session—despite the fact she was presenting alongside graduate students and fourth-year undergraduates.”

“Science is about the joy of discovery. Doing something nobody has ever done before and finding things that nobody has ever seen before,” said Graham Pearson in his interview with the University of Alberta.“I hope that the [WISEST Program] teaches students that, even in a short period, they can do research that is new, that makes a difference, that people are interested in—and that it opens students' eyes to the diversity and gender equality that exists in modern large research groups.”

“You don't need to have a PhD to do good scientific research,” Margo Regier said in her interview with CTV Edmonton. “You just need to have a new idea and you need to work hard to make sure it happens.”

So what's next for Hamdi, in her interview with CBC Radio, she stated, "I actually wasn't sure at all what I should do with my life and WISEST seemed like a good way to figure that out. I wasn't really sure about geology as a whole career or it hadn't really crossed my mind. But now I'm definitely considering it as a viable option."

To listen to Hamdi's interview with CBC Radio, click here.

To read Hamdi's interview with the University of Alberta Faculty of Science, click here.

To learn more about the WISEST Program, including how to participate or volunteer, click here.